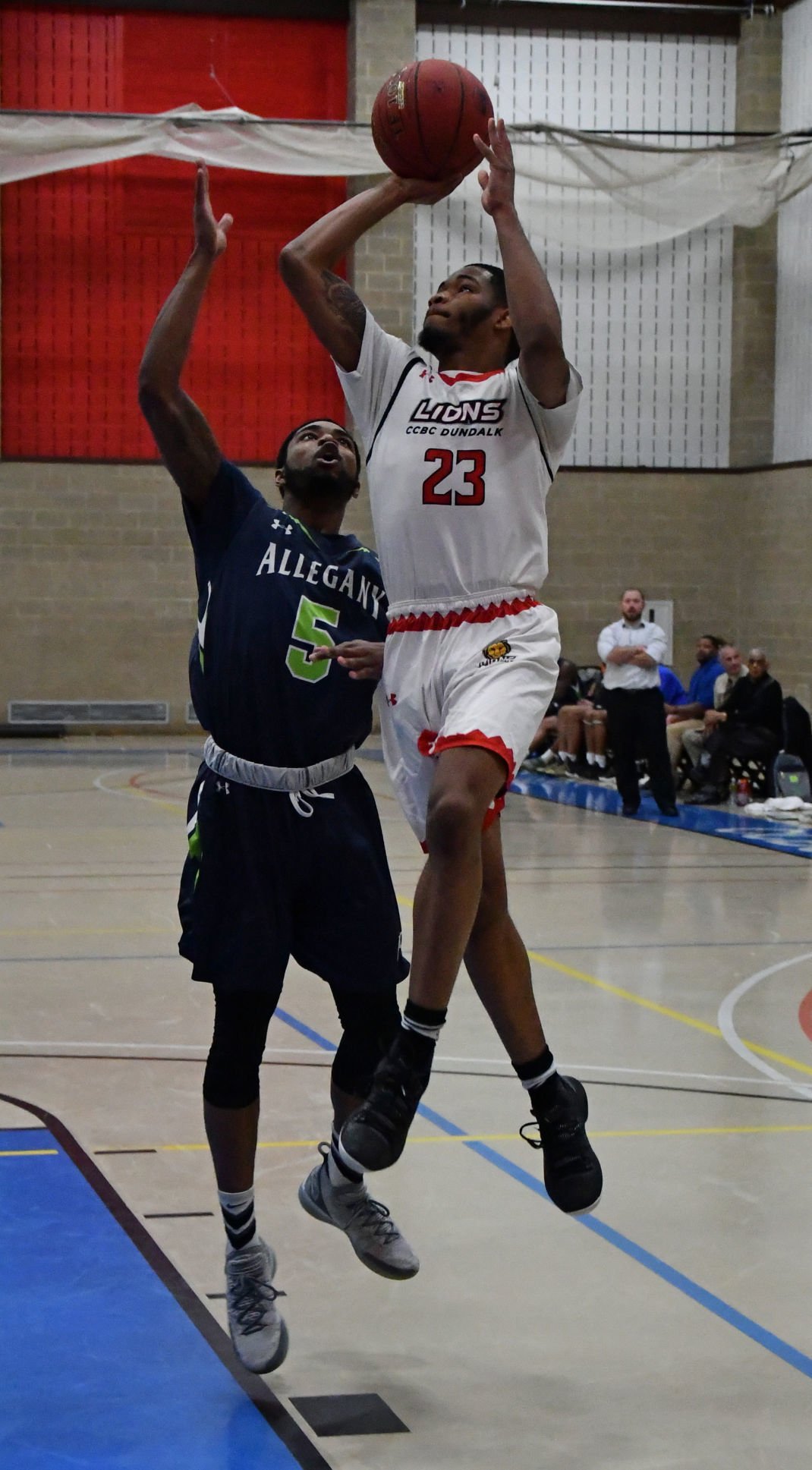 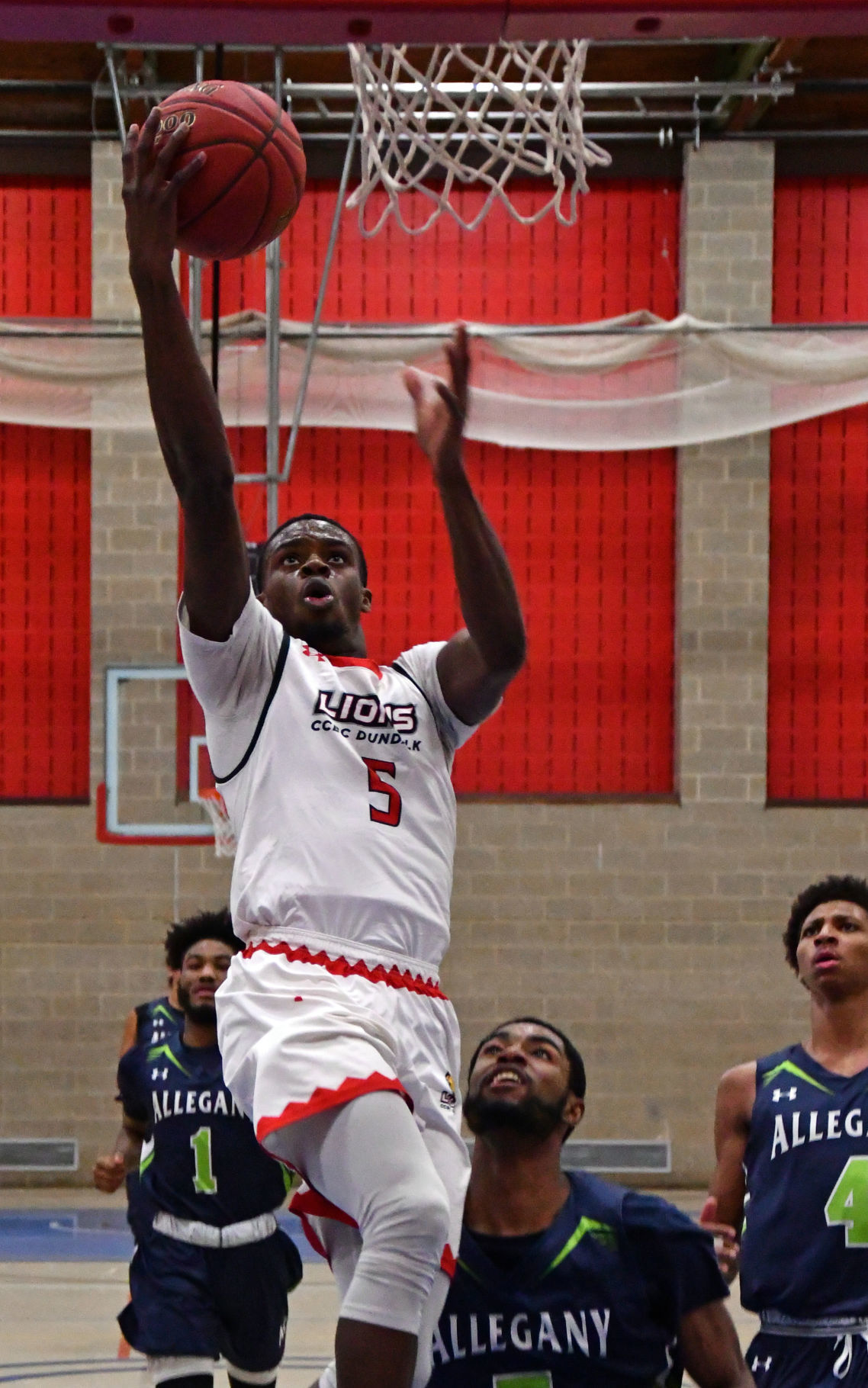 Richard Hibbert drives to the basket against Allegany. 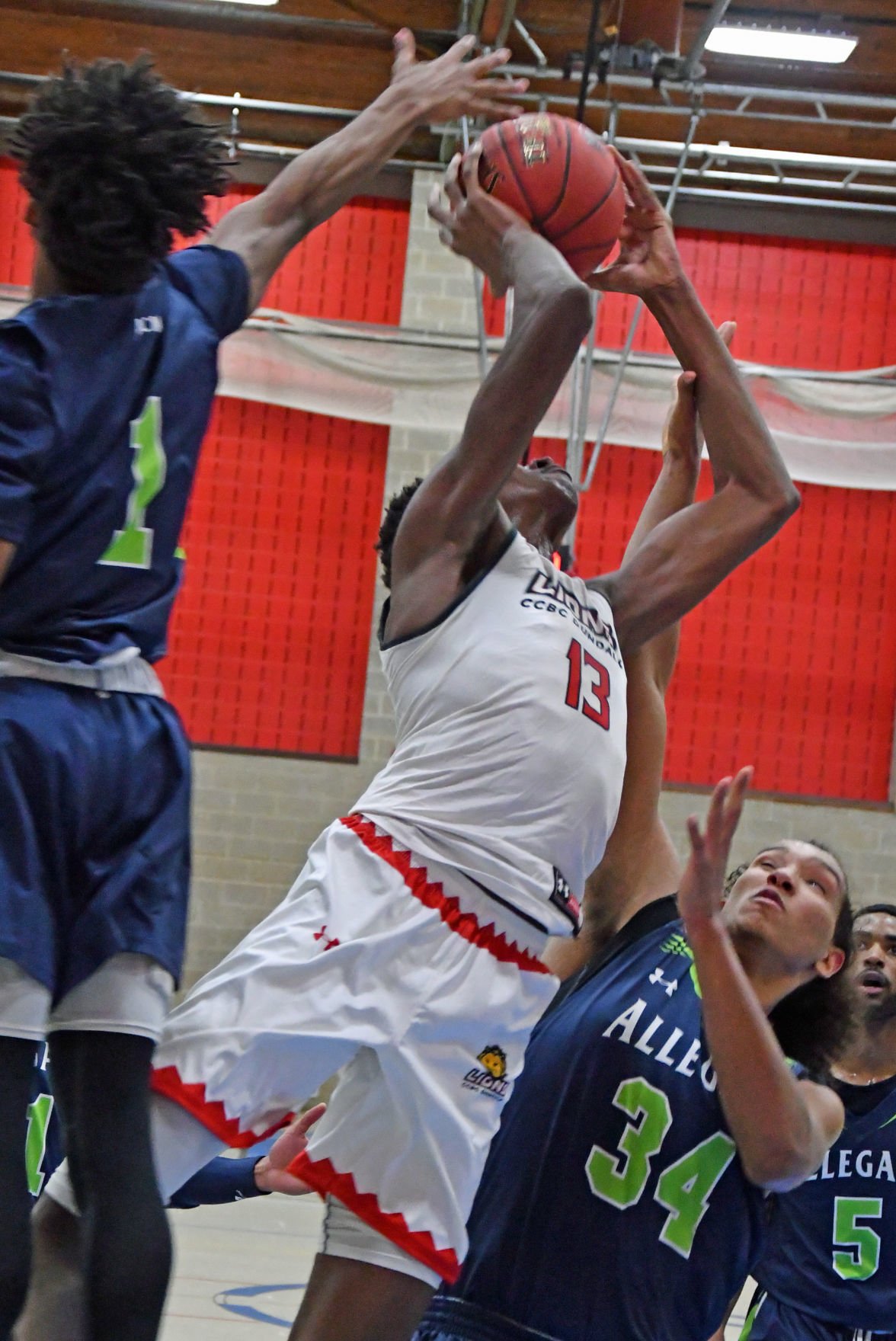 Mohamad Bundu of CCBC Dundalk takes on a pair of Allegany defenders. 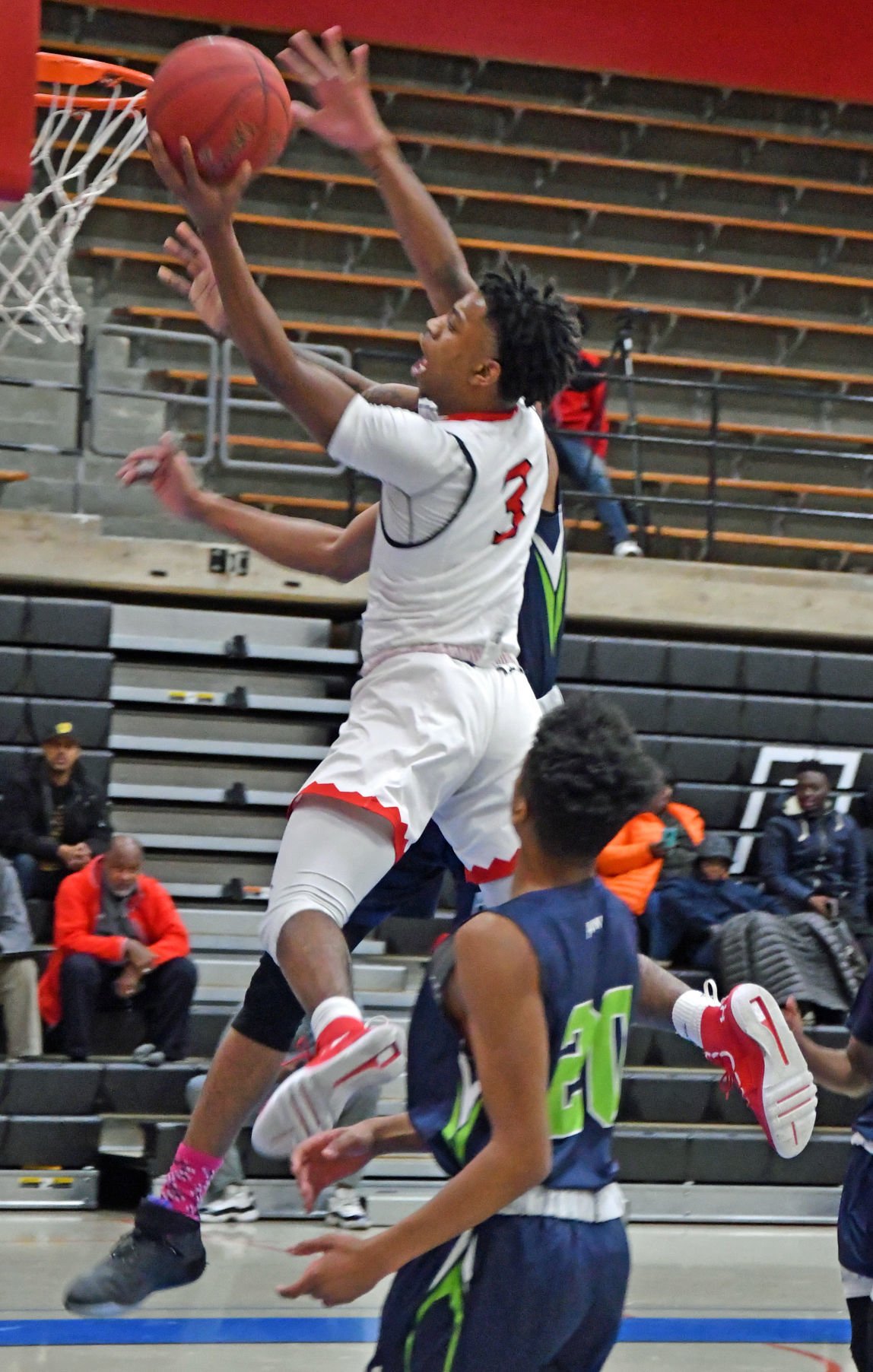 Keijuan Major sails to the basket for a layup. 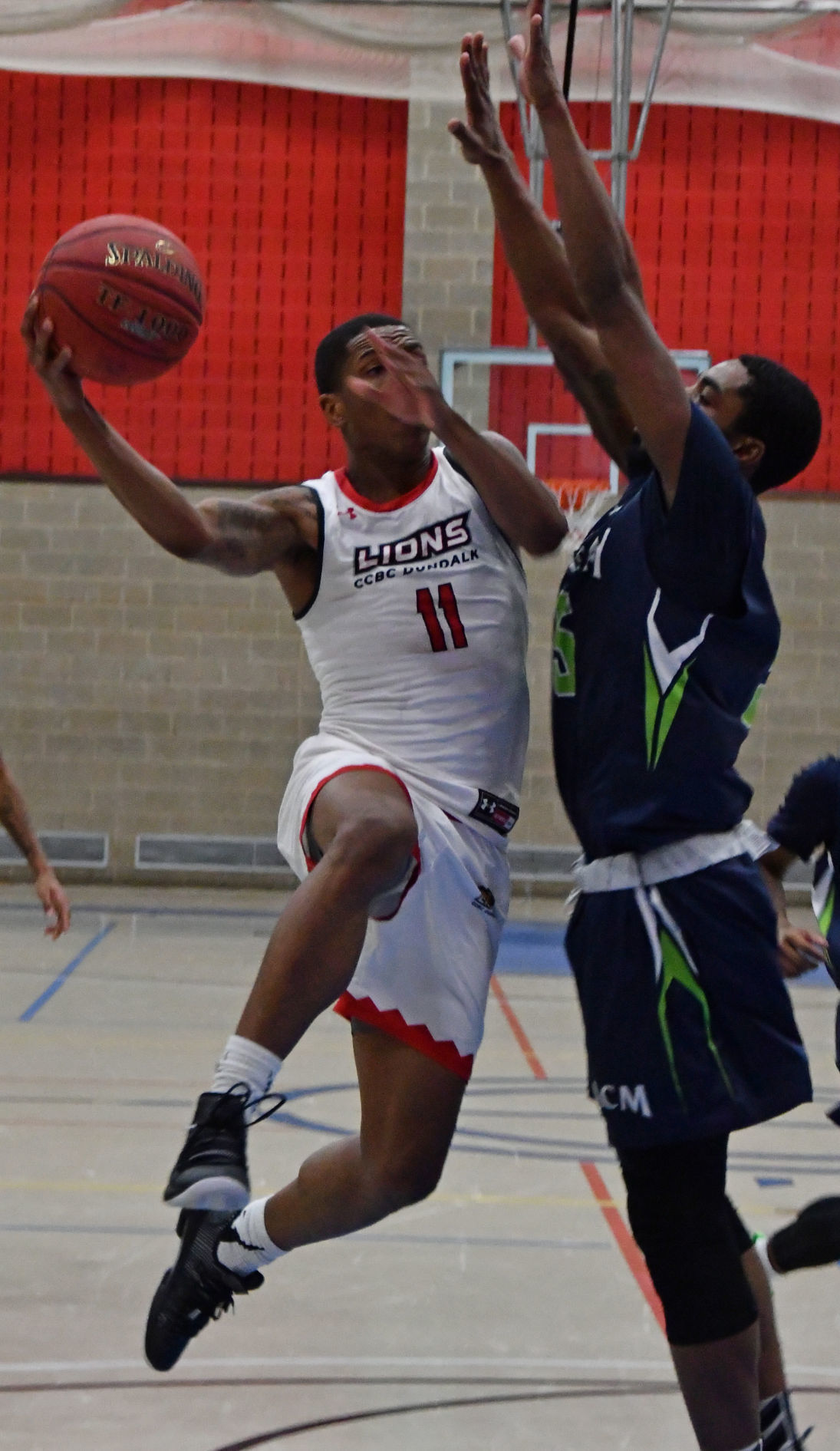 Daniel Byrd of CCBC Dundalk scores two of his 13 points against Allegany.

Richard Hibbert drives to the basket against Allegany.

Mohamad Bundu of CCBC Dundalk takes on a pair of Allegany defenders.

Keijuan Major sails to the basket for a layup.

Daniel Byrd of CCBC Dundalk scores two of his 13 points against Allegany.

The CCBC Dundalk men’s basketball team looked like it had revived its season with a four-game winning streak that brought it close to a .500 record at 7-9.

But a subsequent four-game losing streak sank the Lions back to 7-13 and looked to end the team’s hopes for a meaningful season.

Instead, Dundalk showed it could still be dangerous with an 82-74 win over visiting Allegany College on Friday.

The Trojans (11-8 overall, 8-2 Maryland JuCo League) entered the game as the No. 2 team in the Maryland Junior College League with an 8-1 record.

Dundalk was 2-8 in the conference entering the game.

Lions coach Jaron Taylor said, while the four-game winning streak was good, the two-and-a-half-week semester break in the middle of it kept the Lions from really building any momentum.

“We were moving in the right direction, like we have to, to be successful in January, February and March,” Taylor said. “Then we went to New Jersey, didn’t play well, when it should have been a game in which we continued our momentum.”

Then came a three-hour drive to Garrett and another loss.

“It’s always very tough out there,” Taylor said. “And we lost focus defensively when we played Frederick and Hagerstown.”

The Lions seemed to lose focus again against Allegany, letting a 22-13 lead midway through the first half turn into a 42-34 deficit at halftime.

“We got outworked against Hagerstown,” Taylor said. “I challenged the team to play with heart and passion more than anything else.”

Brion Williams (Parkville) tied the score with 11:22 remaining. He finished with 10 points, all in the second half.

“Williams came off the bench, hit a lot of big shots for us,” Taylor said. “He gave us a spark. I’ve been telling him all season he needed to shoot more. That clicked for him tonight.”

Allegany went back ahead 53-51 and 56-53, and Williams tied the score both times on a basket and a three-pointer.

Keijuan Major gave Dundalk its first lead since late in the first quarter, 58=56, and a three-pointer by Williams made it 61-57, Dundalk, with 9:11 remaining in the game.

The Lions then asserted themselves on defense, holding the Trojans scoreless on three straight possessions while Dundalk extended its lead to 76-64.

It was 80-69 with two minutes remaining, and the same score with under a minute to play. Allegany made it a two-possession game, 80-74, but by then the clock was also against the Trojans.

Dundalk’s next home game is Thursday against Northern Virginia Community College, and the Lions host Anne Arundel County on February 5.