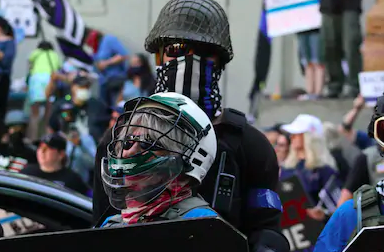 A Dundalk man identified by federal authorities as being connected to the “boogaloo” movement, an anti-government extremist movement in the United States. Frank Perry was arrested after an FBI raid at his girlfriend’s home on Oct. 7. 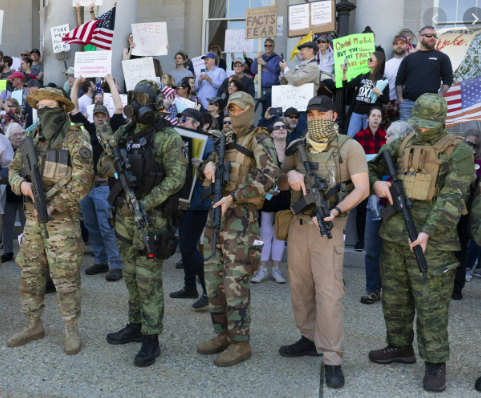 People claiming to belong to the “boogaloo” movement have been seen at public demonstrations around the nation armed with semi-automatic rifles while donning tactical combat gear, such as armored plate carriers and kevlar helmets.

A Dundalk man identified by federal authorities as being connected to the “boogaloo” movement, an anti-government extremist movement in the United States. Frank Perry was arrested after an FBI raid at his girlfriend’s home on Oct. 7.

People claiming to belong to the “boogaloo” movement have been seen at public demonstrations around the nation armed with semi-automatic rifles while donning tactical combat gear, such as armored plate carriers and kevlar helmets.

A Dundalk man who is described by federal authorities as a member of the anti-government “boogaloo” movement was arrested at his significant other’s home last week.

Frank Perry was taken into custody on Oct. 7 after authorities served a criminal complaint related to the illegal possession of a firearm. He is currently incarcerated and has a detention hearing set for Oct. 19.

According to Michael Kunzelman of the Associated Press, Perry was identified last September by the FBI as a member of the “boogaloo” movement, a loosely organized pro-gun, anti-government extremist political movement.

The word “boogaloo” is often used as slang for a violent uprising against the government, and even has been used to describe a second civil war in the United States.

Perry was living with his girlfriend in Dundalk at the time he was arrested.

According to local media reports, federal authorities executed a search warrant at the girlfriend’s home on Quentin Road around 7:08 p.m. on Oct. 7.

The serial number on the weapon was partially concealed, according to reports.

Ammunition and weapons accessories were also recovered from the girlfriend’s home. Perry returned to the home around 9 p.m. and was taken into custody.

According to local reports, the girlfriend, whose name has not been released, purchased the lower receiver for the weapon at The Gun Shop in Essex.

She wrote on a government document that the lower receiver was for her. The purchase was legal, according to reports. Other parts for the AM-15 were purchased on Amazon and shipped to the home on Quentin Road.

Perry is not allowed to possess a firearm, according to local media reports. In 2002, he received a conviction for second degree burglary in Baltimore County Circuit Court. He could have received a prison sentence of up to 15 years.

That prohibits him from possessing a firearm under federal law.

The FBI did not identify the girlfriend as a member of the “boogaloo” movement, according to media reports.

What is the boogaloo movement?

According to several reports, the boogaloo movement began on an internet message board called 4Chan. “/k/” as it was known, the message board was meant to serve as a place for weapons discussions amongst gun enthusiasts.

By 2019, however, media reports said that the /k/ culture turned into a series of online groups, with weapons discussions taking place, but the groups had started to become more political.

The death of George Floyd last May in Minneapolis, Minnesota, kicked off a worldwide series of “Black Lives Matter” protests. The protests took place in every state in the US, as well as other countries around the world. Five months later, those protests are still taking place.

Also taking place over these past five months were sporadic acts of violence around the nation. One of those was in Oakland, California, when a man fired at two federal agents outside an Oakland courthouse.

The man, Air Force Sergeant Steven Carillo, was said to have made social media posts about the boogaloo movement, according to federal authorities.

The movement made national headlines earlier this month when six alleged members of a Michigan-based organization called Wolverine Watchmen were indicted for a plot to overthrow the Michigan government and kidnap Gretchen Whitmer, the state’s governor.

Seven more men were arrested and charged with state crimes in connection with the plot.

“Boogaloo boys” or “boogaloo bois,” as members of the movement call themselves, have shown up to several demonstrations to protest against things such as COVID-19 lockdown orders and police brutality.

They have been seen at these demonstrations wearing combat gear and armed with semi-automatic rifles and magazines filled with ammunition. Some have been seen wearing Hawaiian shirts.

What’s with the Hawaiian shirts?

Members have also used other nicknames for the movement – including “big igloo” and “big luau.” Other names used include “boog,” boojahideen” and “blue igloo.”

Over time, social media platforms began cracking down on boogaloo-related content, causing members to come up with words that don’t sound like boogaloo, like “spicy fiesta.”

What are their political beliefs?

Members of the boogaloo movement have been described by researchers as libertarian, far-right and even alt-right. The US Department of Homeland Security said in a June 2020 bulletin, however, that it doesn’t recognize the movement as left-wing or right-wing.

A portion of its members have been linked to white supremacy groups.

Members of the movement have fueled its far-right image with mentions of historical events such as the standoff at Ruby Ridge, an 11-day standoff between federal agents and a man named Randy Weaver, who had failed to appear in court for weapons charges and had conspired to fight the US Government.

It’s difficult to pinpoint just one worldview when it comes to members of the movement. Its members are self-described libertarians, anarcho-capitalists, anarchists and minarchists.

With so many varying ideologies, it causes confusion when trying to label the movement’s political beliefs.

The boogaloo movement in Maryland

Perry is not the first person in Maryland to be connected to this movement. In March of this year, an individual in Potomac named Duncan Lemp was fatally shot by police in his home during a no-knock raid.

Police served the warrant and conducted the no-knock raid at his home because he was suspected of possessing firearms, something he was not legally permitted.

Lemp’s family has asserted, according to media reports, that they were unaware of any weapons restrictions. His family has also said he was sleeping in his bed when fatally shot by police.

Lemp was the leader of a boogaloo group on Facebook. After his death, he was hailed as a martyr, with some groups asking if he was killed because of his anti-government beliefs. The Eagle has not found any evidence to support this claim.