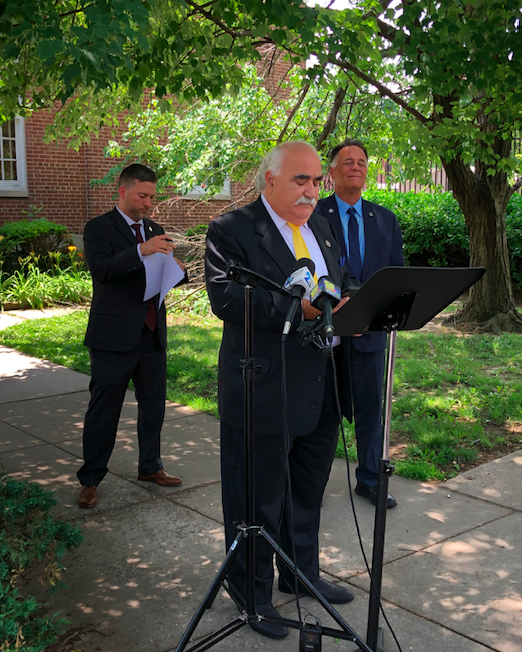 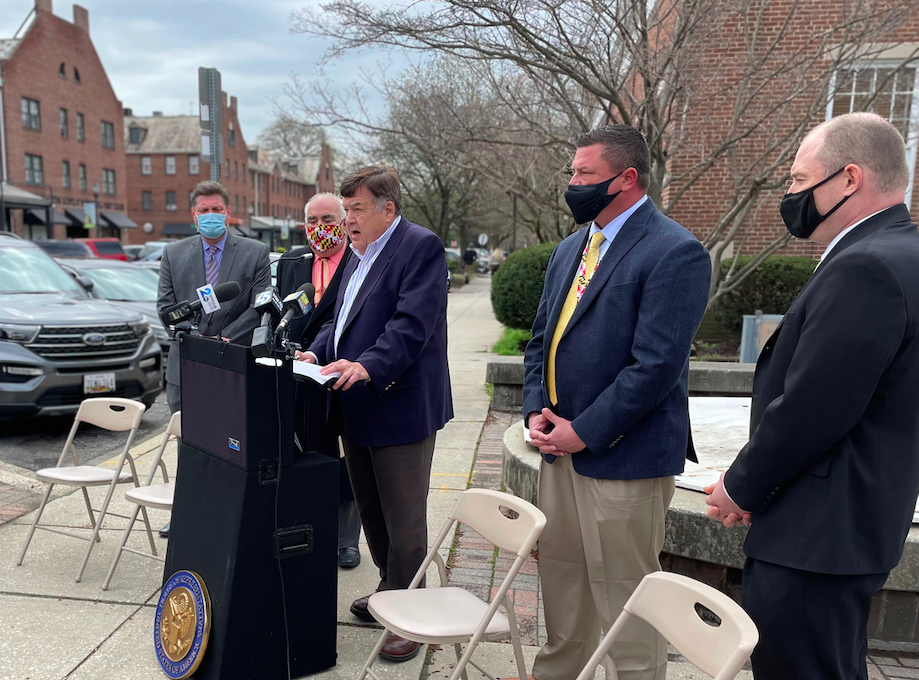 DUNDALK — Dundalk’s state congressional delegation once again stood in front of the Dundalk Post Office, demanding that changes be made to alleviate the lack of quality mail service.

Del Ric Metzgar, R-6, told constituents and local media present that it has been more than 60 days and no changes have happened. On April 1, Metzgar stood in the same spot with Rep. Dutch Ruppersberger, D-2, and said he was setting a 60-day timeline for change. He is now demanding that Dundalk Post Office manager Cynthia Tucker resign.

“I will say that [Ruppersberger] and I are working closely on this matter,” Metzgar said. “He and I have had many conversations on this.

“This is a bipartisan effort. We need to get this resolved together.”

Ruppersberger has requested an audit of the six most problematic post offices, including Dundalk, in the Second Congressional District, conducted by the United States Postal Service (USPS) Inspector General (IG). Metzgar told constituents and local media that Ruppersberger has secured a meeting with the IG, a claim that a spokesperson for Ruppersberger's office denied.

More than 60 days later, more questions have been asked but none have been answered. Metzgar blamed Tucker for poor customer service and lack of workforce participation, saying that she created a toxic work environment inside the post office. He also blamed shipping companies Amazon and Federal Express and demanded that USPS stop delivering packages for these companies.

“The more crippled the postal service is, we have to rely on Federal Express and Amazon to deliver, thus the richer they become.”

Last year, nonprofit watchdog American Oversight posted documents that shed light on the financial relationship between USPS and Amazon. The nonprofit said it obtained the documents through a Freedom of Information Act (FOIA) request. According to the documents, Amazon accounted for $3.9 billion of USPS’s FY2019 revenue, which accounted for less than 10 percent of overall revenue. The documents also showed a $1.6 billion contribution from Amazon in the same fiscal year. Other marketplace partners, like Etsy and eBay, also represented high contributions.

“USPS is competitively positioned to serve [redacted] flex its internal network to handle large amounts of volume and provide capacity relief, its full 7-day delivery operating model and its unique advantage of having access to every home and mailbox in the United States,” the document said.

“Amazon has relied on USPS to pioneer innovative shipping solutions, such as Sunday, Same-Day and grocery deliveries which enable Amazon to remain at the forefront of the eCommerce space.”

The document is a brief regarding the relationship between USPS and Amazon. It can be found on American Oversight's official website, https://www.americanoversight.org/new-post-office-records.

Metzgar made more demands. He demanded that the US Congress stop “fiddling around” giving funds to the postal service, and instead direct those funds to be used for hiring more USPS employees. He also demanded that Congress hold an emergency session to deliver those funds as soon as possible.

He demanded that USPS begin delivering regular mail, in the form of money checks and prescription medications, immediately.

“This is a federal issue, but you are my constituents,” Metzgar said. “I need to demand that head management meet with me.

“I have tried to resolve this issue. We need to tell the postal people to call me. You folks need to call somebody, because I can’t get a hold of anybody on the inside.”

The Eagle also made previous attempts to contact management at the Dundalk Post Office, but to no avail.

Metzgar went even further, saying that many members of Congress blamed subpar mail service across the country on Postmaster General Mike DeJoy removing mail sorting machines from several locations. They said this was an excuse, and a good one because USPS was “figuring out all sorts of things.” Metzgar said USPS needs to only order sorting machines back into service, something he said should have been done a long time ago.

“This is pure politics at the expense of the public,” Metzgar said. “This is not a Democratic or a Republican issue. It’s an American issue.”

Sen. Johnny Ray Salling, R-6, said state officials are working with federal partners on the matter. Metzgar said he has not had contact with any US Congresspersons other than Ruppersberger. He included that he has not heard from any US Senators. He called it “terrifying and disgusting,” saying that Congress has the power to make something happen.

Del. Robin Grammer, R-6, said that while there has been contact with federal officials, waiting for a federal fix will likely be frivolous. Grammar said his office began soliciting stories from constituents about post office failures, and had collected more than 400 within a week’s time. Those reports included delivery failures, late bills, lost packages and delayed medications.

“Mail is perpetually and erroneously redirected to different states; missing communication related to criminal cases, such as victim participation. I can stand here for hours countin the stories from residents who were impacted by the chronic failures of the United States Postal Service.”

Grammar said Sixth District officials have requested meetings with the Baltimore Postmaster, but have yet to secure one. Metzgar said the Baltimore Postmaster has the ability to relieve problematic post office managers of their duties. He added that postal employee resignations are becoming more common, citing a lack of enthusiasm in the job. Grammar added that understaffed post offices are leading to the lack of mail delivery. The local delegation is exploring its own legal standing to litigate the issue, he said.

“I get that this is a federal issue, but we have problems here locally,” Grammar said. “They need to get in that office and put someone in place who will just hire and maintain people.”

Salling said that the Dundalk Post Office has blamed COVID-19 for the slow mail service, but said that staffing shortages are the real culprit. He added that USPS has been federally financially secured and can hire people.

“It’s inexcusable for them to say they don’t have the people,” Salling said. “They have the availability.”

Salling added that there are US military veterans who need work. USPS can hire temps or they can hire new employees, he said.

Ruppersberger’s office said there are no updates concerning their demands for post office audits or a meeting with DeJoy. He requested that DeJoy respond to his request for a meeting by June 11. DeJoy has not missed that deadline. Ruppersberger has also requested USPS data on staffing and retention.

Ruppersberger's office told the Eagle that the USPS OIG does not confirm audits that may or not be underway, but the congressman trusts that USPS IG Tammy Whitcomb will thoroughly review the request and proceed accordingly.