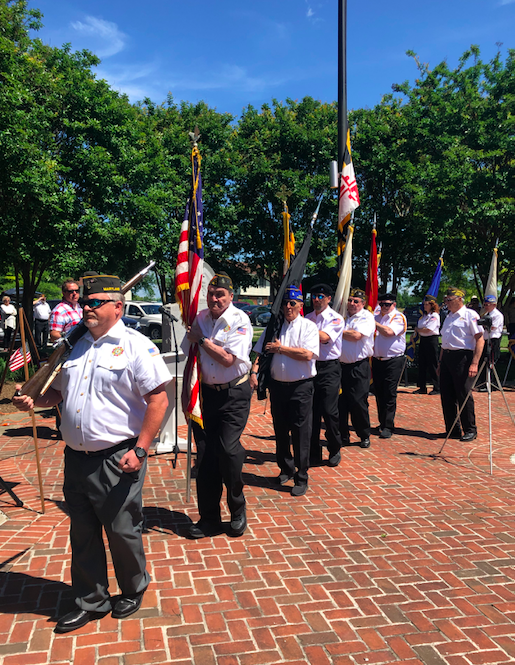 The Honor Guard from Chapter 965 of the Vietnam Veterans of America presented colors at the Independent Order of Odd Fellows North Point Lodge No. 4 Memorial Day ceremony at the World War II memorial at Fort Howard Veterans Park. 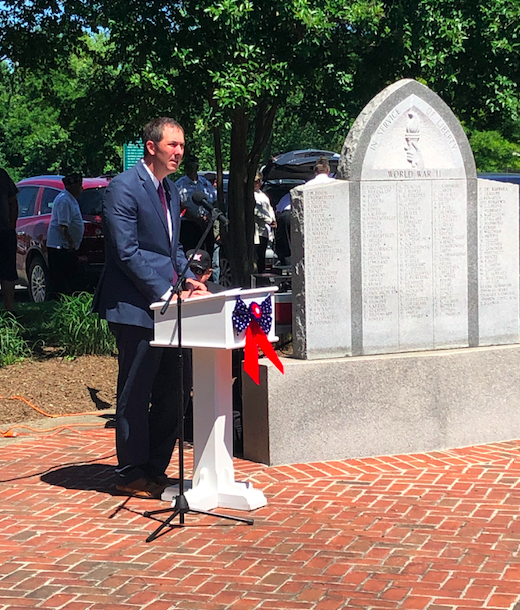 Baltimore County Executive John Olszewski, Jr. was one of several public officials at the ceremony. 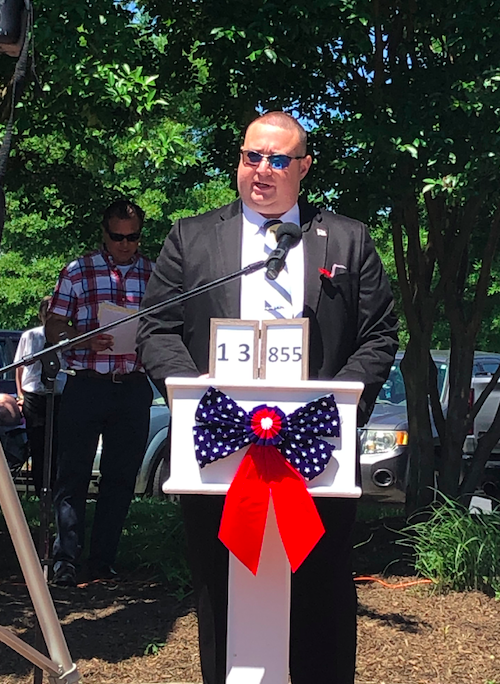 William Feuer attended the ceremony in place of Del. Ric Metzgar, R-6. Feuer held up the number 13,855, representing the number of American war deaths every hour over a 72-hour period.

The Honor Guard from Chapter 965 of the Vietnam Veterans of America presented colors at the Independent Order of Odd Fellows North Point Lodge No. 4 Memorial Day ceremony at the World War II memorial at Fort Howard Veterans Park.

Baltimore County Executive John Olszewski, Jr. was one of several public officials at the ceremony.

William Feuer attended the ceremony in place of Del. Ric Metzgar, R-6. Feuer held up the number 13,855, representing the number of American war deaths every hour over a 72-hour period.

Residents gathered at the World War II memorial at Fort Howard Veterans Park on Memorial Day for a longtime tradition that resumed this year.

The tradition is hosted by the Independent Order of Loyal Oddfellows North Point Lodge No. 4. A tradition that had ran continuously for more than 75 years was was in peril last year due to public gathering restrictions brought on by COVID-19. A virtual event was held in its place. The event resumed this year, with many veterans, civilians and public officials in attendance.

“We pulled it off – despite a few snags – including a dog walking through the ceremony if you saw the video,” said Rob Feigley, Master of Ceremonies at this year’s event. “We are immensely proud of that.

“It was quite emotional and I told myself afterwards, ‘We are going to get through this. Next year we will be back here together again and it will be a triumph of the human spirit.’”

Feigley remarked that triumph of human spirit during his remarks on Monday. Standing before a crowd of 80-100 people, Feigley noted how everyone has “exuded bravery, courage, and resiliency living through the challenges that this pandemic brought upon us.”

At the beginning of the ceremony, respects were paid to late longtime Oddfellows member Dennis Brown. According to Feigley, Brown was a devoted family man and a beloved husband, father, grandfather, brother and uncle. His community involvement began with coaching football, baseball and softball at various community rec centers.

Brown joined the Independent Order of Odd Fellows and became involved with various branches – to include North Point Lodge No. 4, Salem Encampment No. 13, Helena Rebekah Lodge No. 66 and Bunker Hill Canton No. 57. Brown passed away on July 25, 2020.

“He was always deeply involved in our charitable work, including beginning a collection for the Marine Mail program, which reaches out to all branches of the United States Military overseas,” Feigley said.

“He truly went international by establishing an Odd Fellows cyber community with members all over the world, some of whom we have connected with in person both here in Baltimore and by visiting them overseas.”

In 1943, the citizens of Penwood Terrace, Todd’s Farm, and Fort Howard decided that a permanent memorial should be established to honor and remember those in the neighborhood who served in World War II. After tireless efforts, the memorial was erected. An elementary school that once stood is no longer there, but the memorial remains. It bears the names of those from the area who served in Europe and the Pacific Theater. A star is engraved next to those who gave their lives.

Feigley read off each name during the ceremony, and a bell rang for the following:

The following were killed in action during World War I:

William Feuer, a community leader involved with various organizations, attended the ceremony for Del. Ric Metzgar, R-6, who oversaw host duties at a Memorial Day ceremony in Essex. Feuer gave remarks at the podium, opening his speech with a lesson on putting numbers in perspective.

Feuer said that a three-day weekend is 72 hours. “If you take America’s war deaths and divide them into those 72 hours, then you will understand,” he said.

“That is 13,855. Thirteen thousand, eight-hundred fifty-five people gave their lives every hour so we could celebrate three days. Think about that when someone says three-day holiday.”

“... Our freedom savers and those willing to lay down their lives for us,” he said. “Everyone loves freedom, which is no surprise. But not everyone is willing to put their lives on the line for it.

“Sacrifice is meaningless without remembrance. Those freedoms were paid for with the lives of others.”

Feuer said that while no one can thank those who gave their lives for freedom, they can thank living veterans in their place. Every Memorial Day, a controversy appears on social media and within the veteran community about if it is appropriate to thank a veteran for their service on Memorial Day. Feuer said that living veterans also offered their lives for freedom.

“Don’t just take a fleeting moment to say ‘thank you,’” Feuer said. “Be sincere. Talk to them. Ask them about their service.”

The Independent Order of Odd Fellows is a nonprofit organization that, according to its mission statement, aims to provide a framework that promotes personal and social development. The organization seeks to achieve thisby promoting the principles of friendship, love, truth, faith, hope, charity and universal justice. More information can be found on the Independent Order of Odd Fellows official website, www.odd-fellows.org.

The Independent Order of Odd Fellows North Point Lodge No. 4 meets every Wednesday at 9401 North Point Rd. Meetings begin at 7 p.m. Anyone interested in joining is encouraged to attend these open meetings. People can also learn more information by calling 410-477-1101, or visit the lodge’s Facebook™ page at www.facebook.com/oddfellowsnorthpoint.