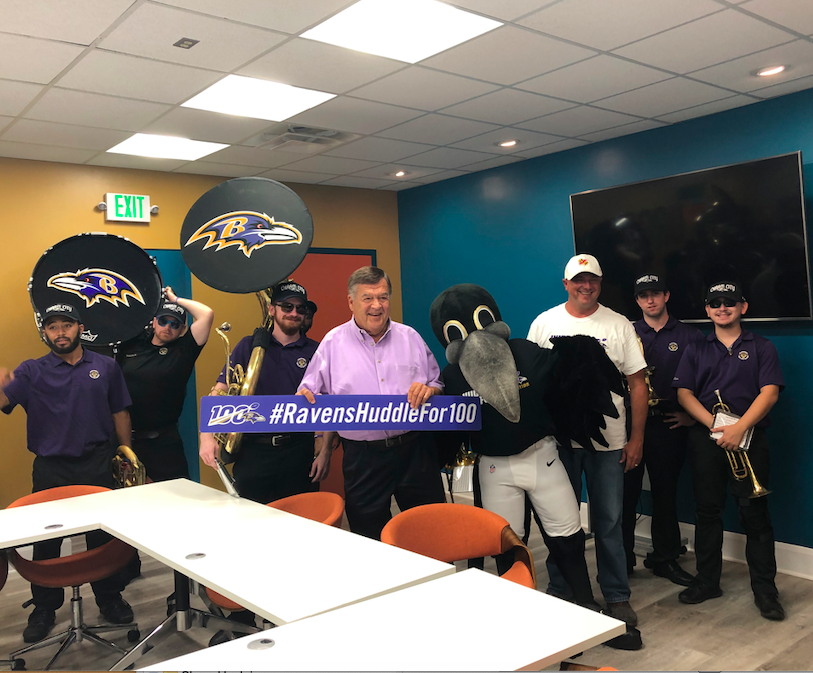 Rep. Dutch Ruppersberger, D-2, poses for a photo with Baltimore Ravens mascot Poe and members of the Marching Ravens. 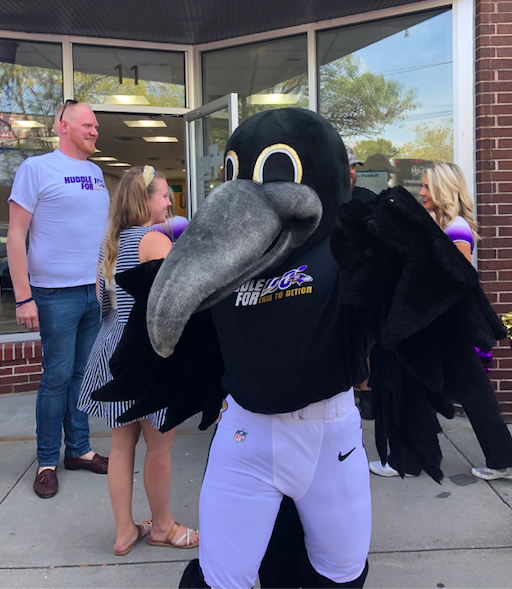 Baltimore Ravens mascot Poe made an appearance in historic downtown Dundalk on Sept. 23 for the NFL’s Huddle for 100 campaign.

Rep. Dutch Ruppersberger, D-2, poses for a photo with Baltimore Ravens mascot Poe and members of the Marching Ravens.

Baltimore Ravens mascot Poe made an appearance in historic downtown Dundalk on Sept. 23 for the NFL’s Huddle for 100 campaign.

DUNDALK — The Baltimore Ravens might have been on the road last week, but official mascot Poe and Rep. Dutch Ruppersberger, D-2, made a trip to Dundalk’s Historic Downtown Square on Sept. 23.

Poe and Ravens cheerleaders made the trip to Dundalk as part of the NFL’s Huddle for 100, a community service initiative sponsored by the league as part of its 100th anniversary celebration. The NFL is celebrating its 100th year during the 2019-20 season.

Ruppersberger is a known Ravens fan, and said he once played football for George Young at Baltimore City College. Young went on to become the general manager of the New York Giants from 1979 to 1997. The Giants won two Super Bowls during his tenure.

“Baltimore City College, where I went, is the only high school in the country that has three active members of Congress – Ben Cardin, Elijah Cummings and myself,” Ruppersberger said. “What’s really important is to go into your community and make a difference. This is the 100th anniversary for the NFL, and I think it’s great they are focusing and targeting their fans and communities, and letting them know that we are part of the Baltimore community, the Baltimore region, and that we love Dundalk. We want to say that we have a community project and we care about you.”

Tasha Gresham-James, who is a housing initiatives manager for Dundalk Renaissance Corporation, said the NFL is pushing for 100 million hours of community service, and DRC was one of more than 50 nonprofit organizations chosen to contribute to the Ravens’ hours.

“In all, over 15,000 people will volunteer and represent a combined two million-plus minutes of service throughout the Baltimore community,” the release said. “Fans are invited to document and highlight their volunteerism through social media posts by using #RavensHuddleFor100, which will also help collect and track the total team minutes being accrued.”

Ruppersberger is currently serving his ninth term as a representative of Congress, and has filed for reelection in 2020. Three Republicans have filed for the election so far, and will face off in the primary election in Maryland is scheduled for April 28. Local son and State Senator Johnny Ray Salling, R-6, will vie for the nomination against Genevieve Morris and Tim Fazenbaker.

Ruppersberger said he is very basic when it comes to politics. He said he was in local politics for 17 years, and that there isn’t much politics in local government other than election time.

“I do what I do every day,” Ruppersberger said. “I have the best staff in the country. We do constituent service, and I specialize in national security in Washington. I was the ranking member of the Intelligence Committee. I’m in defense appropriations right now. You do your job, and hopefully people will continue to vote for you.”

Ruppersberger said he won’t change anything when he returns to the campaign trail. He’s in communities as much as he can be, adding he’d like to be in communities a lot more.

Salling announced his candidacy for Maryland’s Second District seat last month at Dundalk’s Boulvard Diner, and has made several public appearances since his announcement. He attended Essex Day on Sept. 21, and recently appeared at a town hall meeting at Tradepoint Atlantic.

“My strategy (if Salling is the opponent) would be the same strategy I have now,” Ruppersberger said. “We will talk about the issues. I happen to have a good relationship with Johnny. He comes to my office for help with our constituents on issues that might be federal matters. It’s like an athletic contest. When the election is over, we’ll work together no matter who the people choose. If I’m chosen on the Democratic side, then I’ll work with whoever is on the Republican side. If I win, Johnny and I will have the same relationship.”