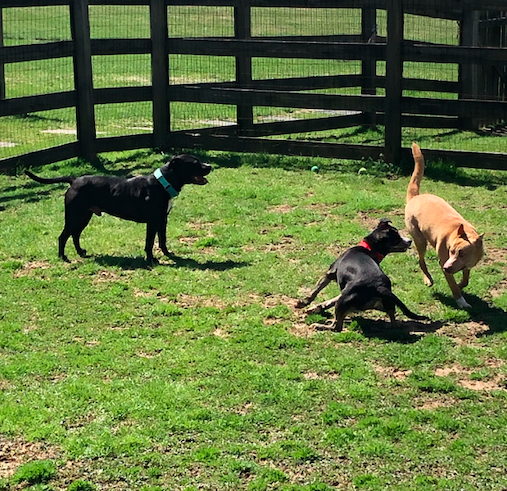 Volunteer dog Alfie (black pit bull terrier) watches two younger dogs play inside an outdoor playpen at the Baltimore County Humane Society. Around the country, rescues are seeing an influx of surrenders as people are returning to work. BCHS said that hasn’t been the case in Baltimore County. 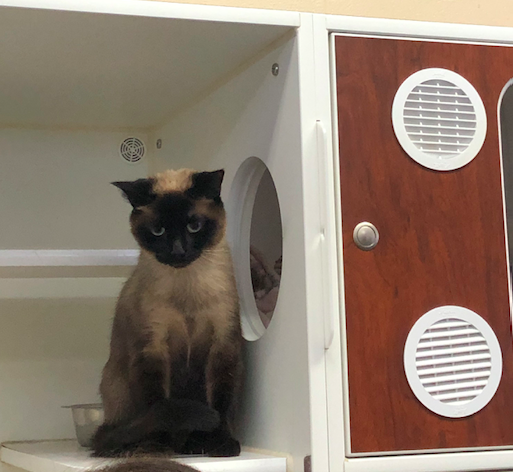 This young siamese cat, named Moon Pie, is one of many cats available for adoption at the Baltimore County Humane Society.

Volunteer dog Alfie (black pit bull terrier) watches two younger dogs play inside an outdoor playpen at the Baltimore County Humane Society. Around the country, rescues are seeing an influx of surrenders as people are returning to work. BCHS said that hasn’t been the case in Baltimore County.

This young siamese cat, named Moon Pie, is one of many cats available for adoption at the Baltimore County Humane Society.

Across the nation, animal organizations are concerned about a wave of surrenders as people return to work, but evidence has not been seen up to this point in Baltimore County.

The Baltimore County Humane Society has seen only a slight uptick since last March, when the pandemic began, according to the animal rescue’s records. At the end of March 2020, BCHS took in 39 surrenders. At the end of this month, 42 rescues. The humane society takes in most small animals, primarily dogs, cats and rabbits.

Katie Dixon, director at BCHS, said that the rescue saw an increase in adoptions when the pandemic began. The staff expected the opposite, she said, but they instead found that they couldn’t keep up with demand.

“Animals, their length of stay was just so short,” Dixon said. “We were able to stay consistent.

“Last year, we didn’t do as many adoptions as we did in 2019, but I think we were pleasantly surprised with how consistent adoptions were throughout the entire year.”

Baltimore County residents visited the shelter for various animals, Dixon said, but the most one most consistently adopted was the cat. BCHS saw more cat adoptions than anticipated throughout the year, she added.

“We saw less of a kitten season last year,” Dixon said. “Usually, during the springtime is when we’ll start to see a lot of litters and adolescents.

“Our shelter didn’t see as many of those adolescents coming in, but there has been a strong interest in adult cats, which is really, really nice to see.”

Organizations are at capacity, making fostering an option

While BCHS has managed to keep adoptions and surrenders at a consistent flow, other organizations have not been so lucky. Michelle Dobbs, a Sparrows Point resident who volunteers with the Mid-Atlantic Border Collie Rescue, a haven for border collies that have been abandoned, discarded or neglected.

Dobbs has worked in the veterinary industry for more than two decades. She currently works as a veterinary pharmaceutical drug representative. Like many people, she began working from home, and used the extra time added by her new reality to foster animals. She has helped young puppies experience a loving home before being adopted by their new families.

“Since I was home the [MABCR] director had a couple of special needs [cases],” Dobbs said. “One puppy was thrown in a dumpster at five weeks old, and I had a puppy that was four months old.

Dobbs said the ideal situation is to find a foster home for abandoned puppies for this reason. On top of that, they’re immune systems are weak. Dobbs said she has dogs of her own, at various stages of life, creating an ideal situation for a foster pup. Along with that, her dogs don’t care when she brings another dog home, she said.

Dobbs said that MABCR’s adoption services became much busier when the pandemic started. More people at home meant more people wanted to get a dog, she said.

“It’s a double-edged sword,” Dobbs said. “They were home, and they had the time and attention.”

Dobbs told the Eagle that MABCR’s dog rescue is currently at capacity, with staff members and volunteers bracing for what she described as teeth-clenching. People are returning to work, meaning that their loyal pets who got used to seeing them at home every day are now experiencing things like separation anxiety.

“My fear is that things are going to get worse in about a year,” Dobbs said. “People have now adopted dogs who are acclimated to their owners and their families being home all day.

“They’re going to have to transition. If you got a puppy during the pandemic and you didn’t crate train it and it’s now a year old … you can do it, but it’s going to be a lot rougher.”

Dobbs said her own dogs maintained their schedules even though she worked from home. When it would have been time for her to leave home to commute to her job, she still kept her pets in their kennels until it was time for her to return home. Her dogs are older, she said, but she does not want to put them through a similar experience.

Dobbs said her biggest fear is that euthanasia numbers will increase if dogs are not adopted. Many shelters are distancing themselves from the “kill shelter” label, but some still are not. While many states are legislating kill shelters out of existence, Maryland has yet to do the same.

While Dobbs is taking the time to foster puppies and get them ready for their new homes, another local resident named Melissa Hawkins is doing the same, but with cats. She has named her cat foster operation “Rugby’s Rescues,” named after her cat Rugby with who she shared a special bond.

Hawkins said she got Rugby when she was 18, just as she was beginning to enter her adult life. She and Rugby held that bond for nearly 18 years, she said. He helped her through some of her most difficult times, she added.

“When I lost him, I knew that I wanted to start fostering,” Hawkins said. “I thought the best way to honor him would be to start doing that and to start ‘TNR,’ which is trap, neuter, release.

Every foster kitten I have, I put a little bit of the love I have for [Rugby] into each kitten when I get them adopted. My goal is to keep his memory alive.”

Hawkins said she started Rugby’s Rescues near the end of 2019. A majority of her work consists of taking in pregnant cats that are close to delivering, as well as kittens at trap sites. She gets to work at socializing, since the cats are feral, to get them ready for adoption. As for TNR, she traps cats and takes them to have them spayed or neutered, and then they are returned to the same spot, as long as there is a caretaker who can look after them.

“Ferals don’t really do well when you move them to new locations,” Hawkins said. “It’s best to return them to where they came from.

“The thing is, once they’re fixed, new cats don’t move into a territory with a stabilized colony. They have a territory so no other animals will come in. A lot of times, if you move then out then people think no other cats will show up. That’s generally the opposite.”

Hawkins said that the pandemic has made things more difficult for her and other volunteers. TNR clinics were working under reduced staff and reduced appointments. Because of this, people in the area are worried about what Hawkins called a “kitten explosion.”

“The pandemic has certainly caused some issues with that,” Hawkins said.

At the same time, she said, her adoptions have not gone down. In addition, she said she believes that more people are converting their homes into pet foster homes, because they are at home more. They have more time to walk a dog, or train a kitten, she said.

Hawkins said she has heard the same concerns about a post-pandemic stray pet explosion, and has those same concerns herself. All she can do for now, she said, is vet potential adopters and ensure they are not taking in a pet only because they are spending more time at home.

“That’s become part of the interview process,” Hawkins said. “If we find out that someone is currently working at home, the shelter I foster for has added three questions specific to the pandemic.”

Hawkins said that people can reach her or find out more about Rugby’s Rescues by going to the rescue’s Facebook page, Rugby’s Rescues. She is also on Instagram, she said, where she will post the animals she has that are waiting to be adopted. She also can be reached by email at rugbysrescues@gmail.com.

What you can do

Dixon said that before coming to the decision to surrender a pet, they can visit the BCHS website for a list of resources that can help with pet situations, such as BCHS’s pet food bank, as well as access to vaccines and affordable veterinary care. Dixon said these things have been large factors during the pandemic.

In addition, Dixon said, other organizations also carry helpful resources. She encourages people to reach out to area shelters for that reason, she added.

Adopters who have visited BCHS have not been there on impulse, she said. They have been planned processes. Those who have visited the shelter to adopt will hopefully stick to their long-term commitments, she added.

Dobbs said she hopes that places that provide obedience lessons will reopen as COVID restrictions begin to lift. Keeping your pet on a consistent schedule, even if you are working from home, is also effective, she said.