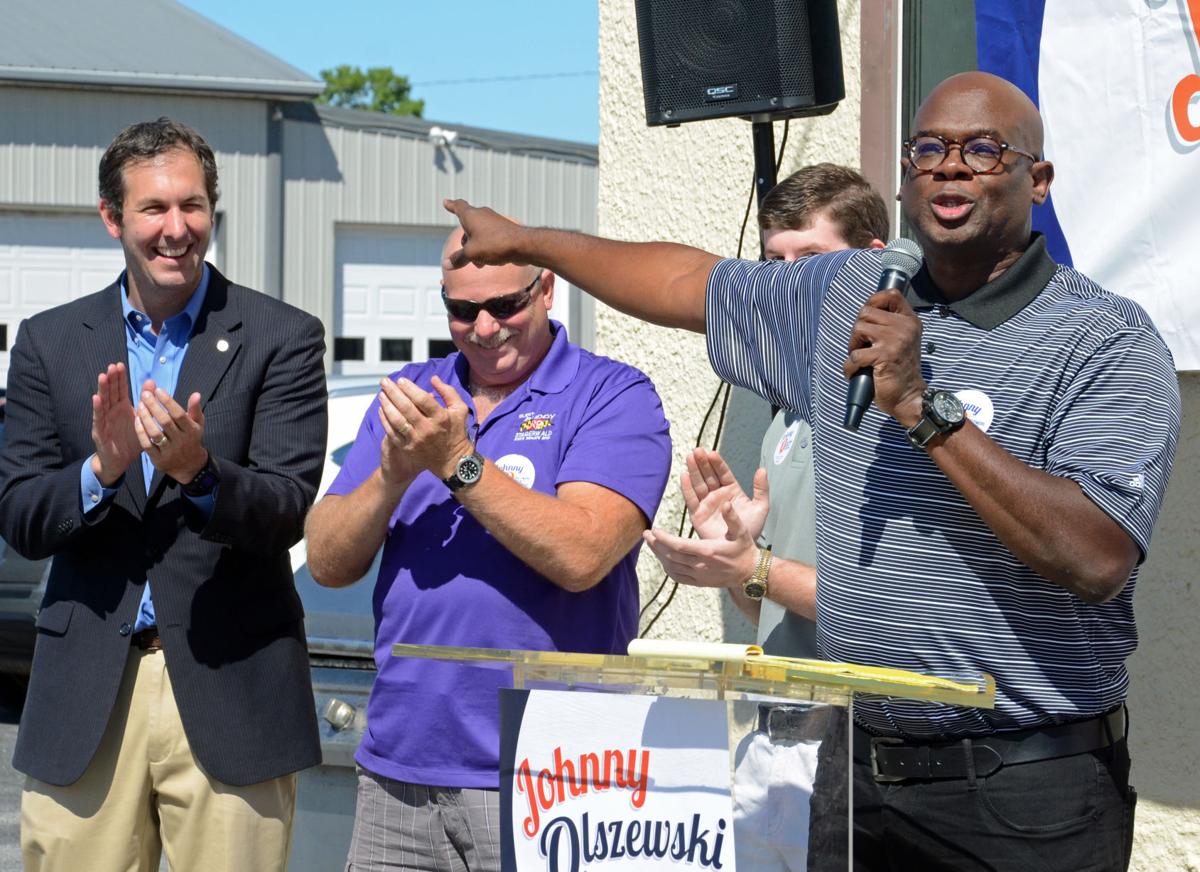 CCBC Dundalk professor (and former candidate for House of Delegates) Eric Washington acted as the master of ceremonies for the opening of John Olszewski Jr.’s campaign headquarters on Saturday. 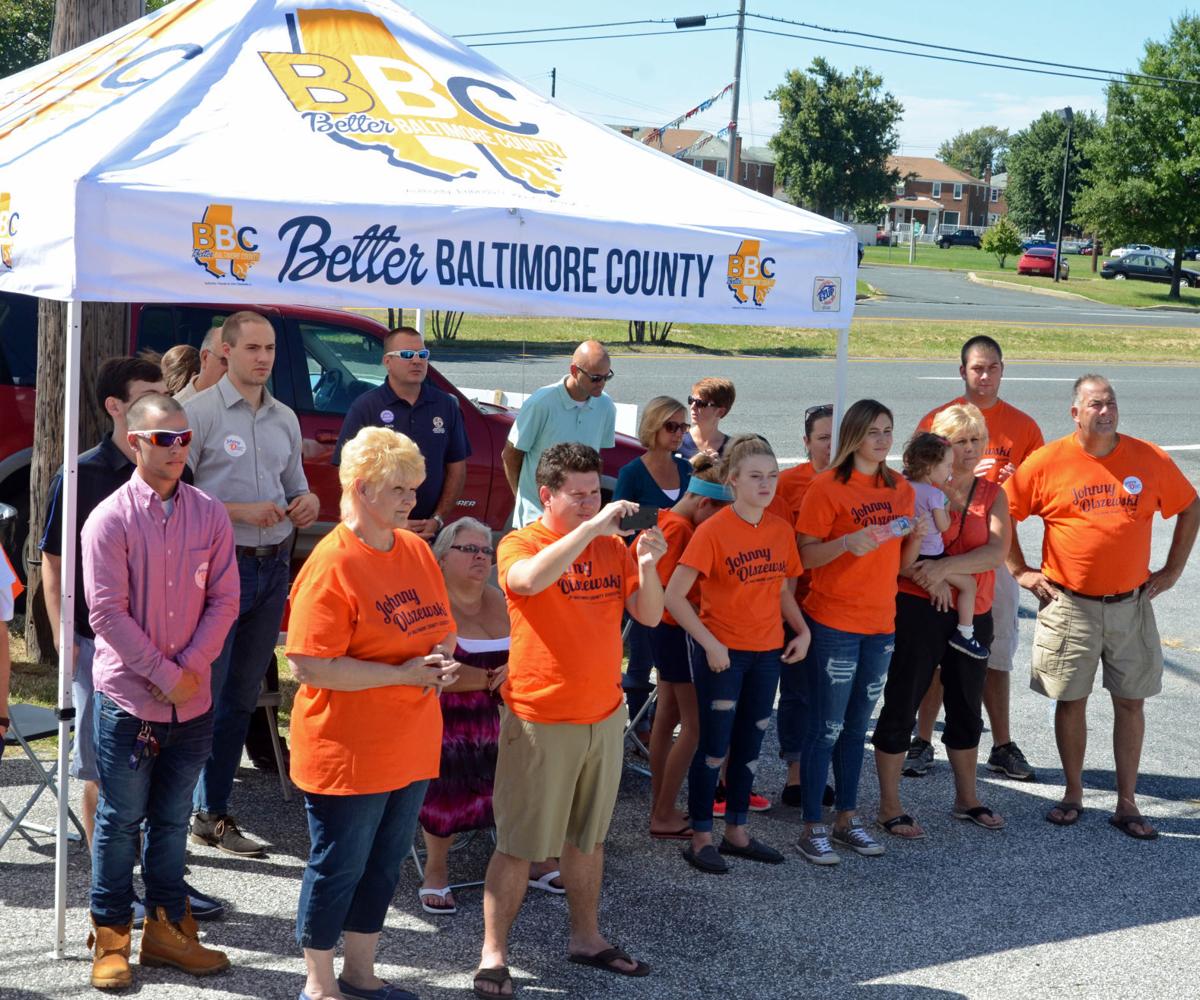 Campaign volunteers and others turned out as John Olszewski Jr. officially opened his campaign headquarters on Saturday on North Point Boulevard. 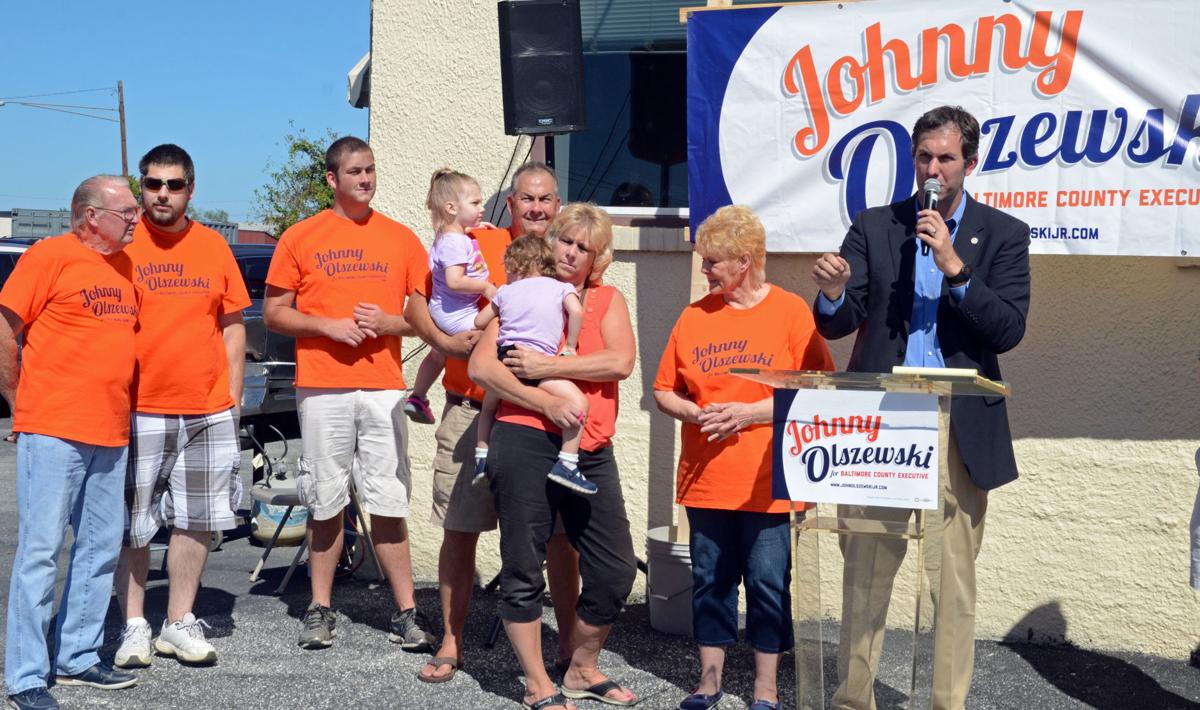 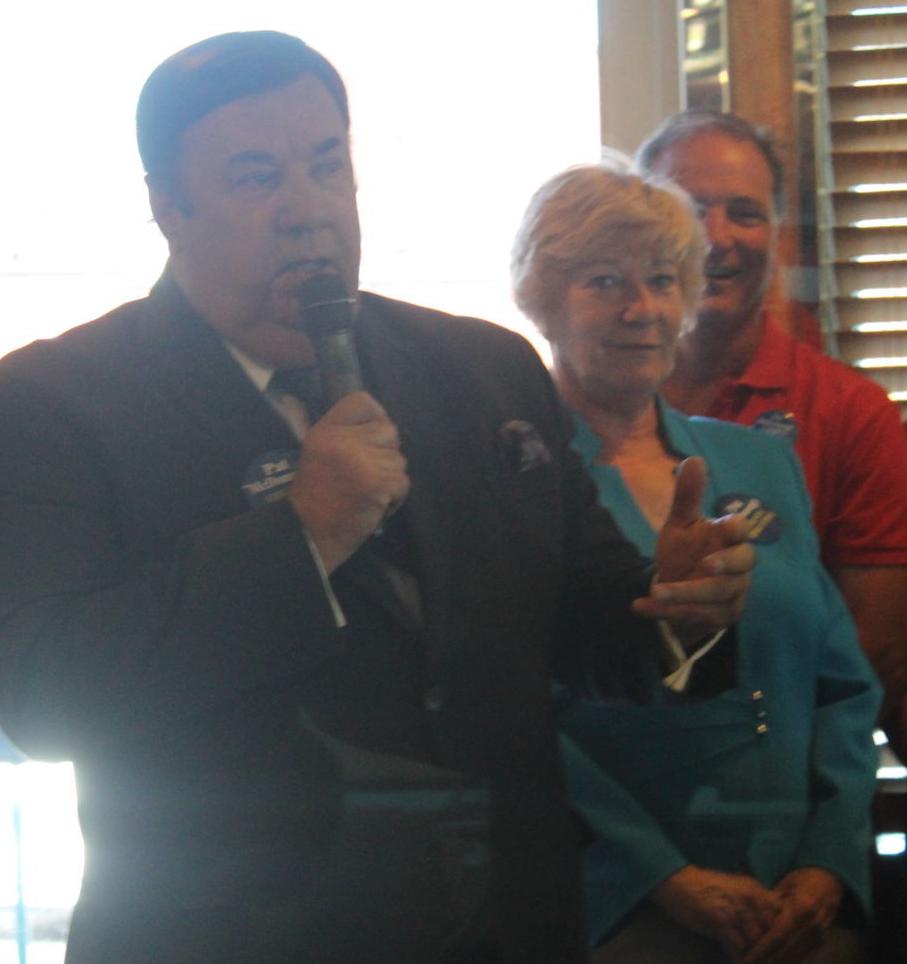 “I’ve been wanting to do this for a long time,” Valerie McDonough said, introducing her husband at Saturday’s campaign kick-off. “Here he is, your next Baltimore County Executive: Pat McDonough!” 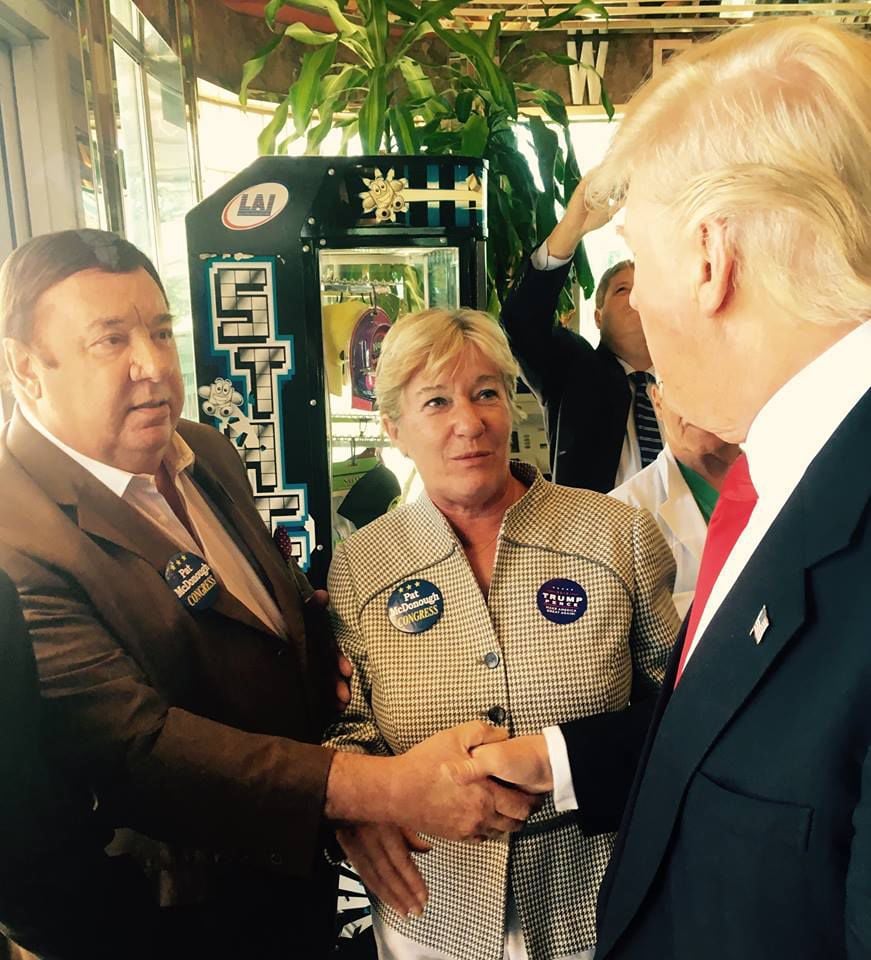 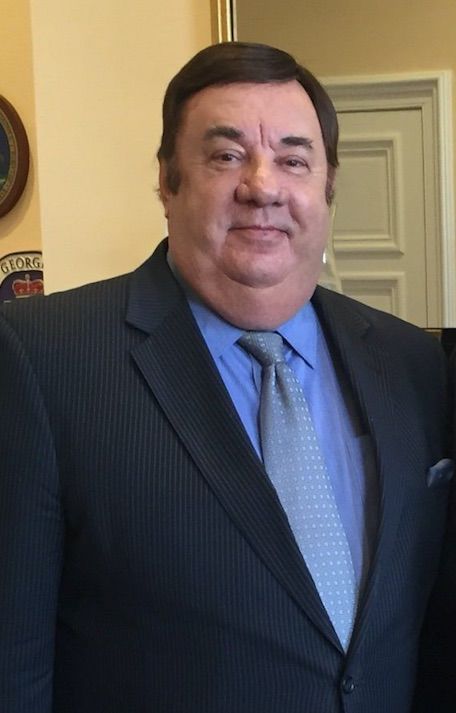 CCBC Dundalk professor (and former candidate for House of Delegates) Eric Washington acted as the master of ceremonies for the opening of John Olszewski Jr.’s campaign headquarters on Saturday.

Campaign volunteers and others turned out as John Olszewski Jr. officially opened his campaign headquarters on Saturday on North Point Boulevard.

“I’ve been wanting to do this for a long time,” Valerie McDonough said, introducing her husband at Saturday’s campaign kick-off. “Here he is, your next Baltimore County Executive: Pat McDonough!”

The race to succeed term-limited Kevin Kamenetz as the next Baltimore County Executive is heating up as five candidates, three Democrats and two Republicans, have already or will soon toss their hats into the ring ahead of the 2018 election.

John Olszewski Jr. stressed he would pursue measures to get citizens more involved in county government during the official opening of his campaign headquarters on Saturday in the 4000 block of North Point Boulevard.

Olszewski, a former two-term member of the Maryland House of Delegates, was the first Democrat to formally announce his candidacy for Baltimore County executive earlier this year.

“There was a proposal to move county council work sessions from the middle of the day, when most people are working, to the evenings, so that more people could participate,” Olszewski Jr. said. “[If I’m elected county executive] I’ll introduce that legislation and push for it.”

Olszewski Jr. said he would also push to have additional county budget hearings. Currently, there is one budget hearing, and it is held in Towson.

“We want to have three budget hearings, at least, and hold them throughout the county,” Olszewski said. “Ideally, we would like to have a budget hearing in each district.

“No [citizens] attended the last budget hearing. We need to let residents have their say. We have to do better than having no one participating.”

Since announcing in June, Olszewski has garnered several endorsements. The County Seal Democratic Club of Baltimore County voted unanimously to endorse him, as well as State Sen. Kathy Klausmeier and Del. Eric Bromwell.

He has also been endorsed by the local chapter of the United Food and Commercial Workers union, and the union that represents all of the local longshoremen.

If elected, Olszewski Jr. said he will also pursue campaign finance reform and push for a public option.

“We know it works,” he said. “The volume of one’s voice should not be determined by how deep your pockets are.”

During the event on Saturday,. Olszewski Jr. reminded people the primary election day was just nine months and three days away.

“It’s about relationships, it’s about family, it’s about connectiveness,” he said. “We’re going door-to-door to connect with people, and engaging them in phone conversations.

“We have no gobs of special-interest money. We’re not sitting behind a computer screen. We’re going to transform Baltimore Çounty because we believe in the people of Baltimore County.”

Olszewski said the campaign will continue to knock on doors and attempt to reach people by telephone. He also wants to open smaller outposts (like his campaign headquarters on North Point Boulevard) in the western and central areas of the county.

Olszewski Jr.’s father, long-time former county councilman from the 7th District John Sr., said “he’s not just my son; he’s a man who will do the job.

“Today is just the beginning. We’re going to work hard, we’re going to do our best to make him the next county executive of Baltimore County.”

On Sept. 23, Del. Pat McDonough (R-7), kicked off his campaign for Baltimore County Executive with an event at the Boulevard Diner on Merritt Boulevard.

More than 50 people were in attendance for McDonough’s breakfast, held at the same location that now-President Donald Trump visited during a campaign stop in Dundalk last September.

During his speech, McDonough promised a county executive office that functions in advocacy of the people of Baltimore County.

“The days of Baltimore County being second class citizens to Baltimore City are over,” McDonough promised. “For 24 years we’ve had executives [...] and they’ve done a job on the people of this county, but I’m going to do a job for this county.”

Specifically, McDonough claims that, if elected, his office will handle complaints more adamantly and efficiently. He also claims that he will crack down on drug usage and other felonious behaviors in the county by increasing the police force.

McDonough expressed interest in looking into private education options for the county in addition to securing job and trade training for high school students.

McDonough revealed that, after running for county executive, he does not intend to run for any other office.

“I support all the candidates through the primary,” said Metzgar when asked what his attendance meant for endorsement of the candidate.

Other current, past and prospective politicians also came to support McDonough’s event.

Redmer also launched his campaign for county executive on Saturday, announcing his candidacy with Gov. Larry Hogan during a sold-out bull roast at the Boumi Temple in Rosedale.

McDonough is already taking on his primary opponent, distributing a flier dubbed “The Redmer Report,” which has also been published to his Facebook page.

The flier consists of a list of nine statements, which include comments on Redmer’s performance as insurance commissioner, among other comments.