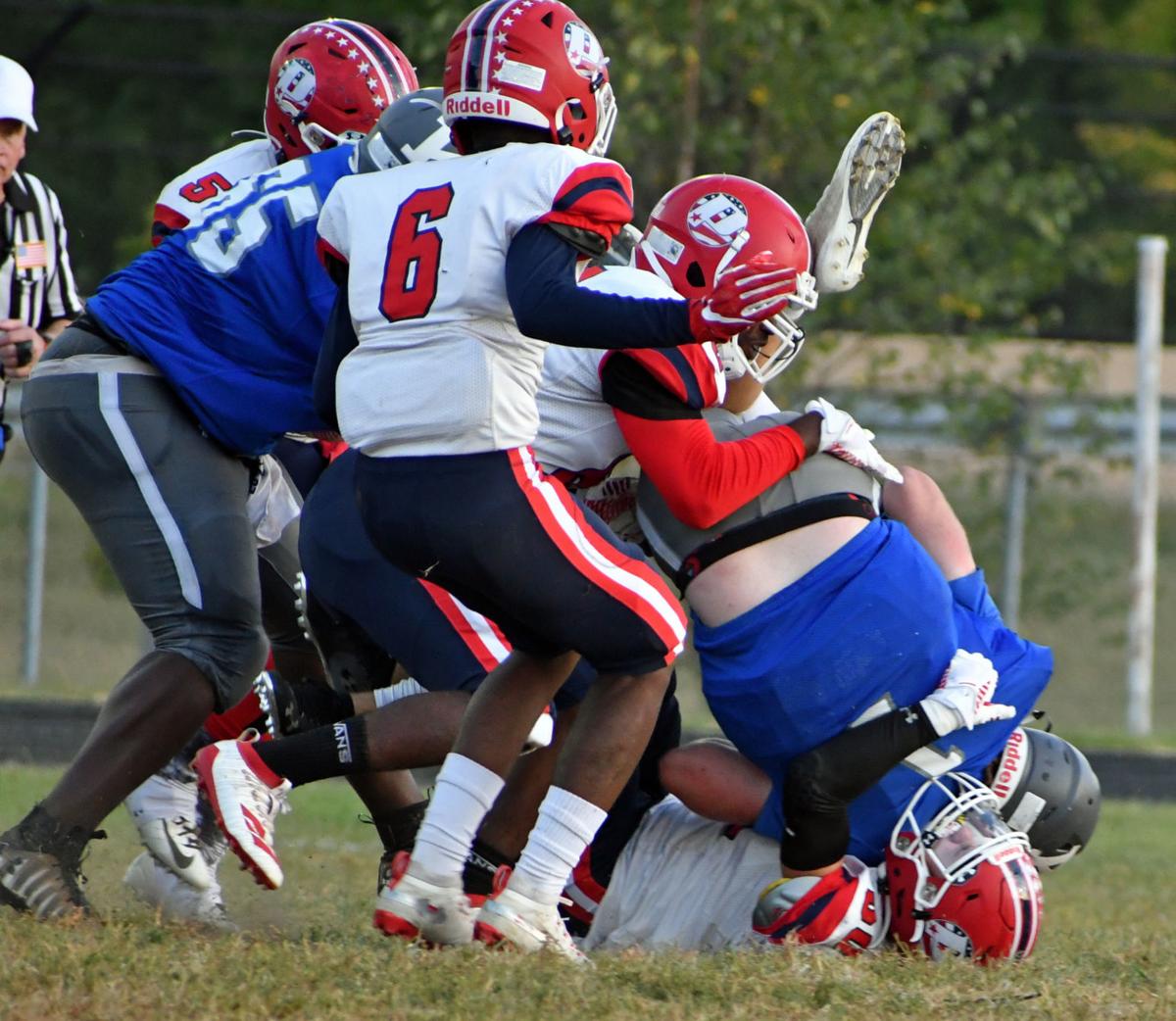 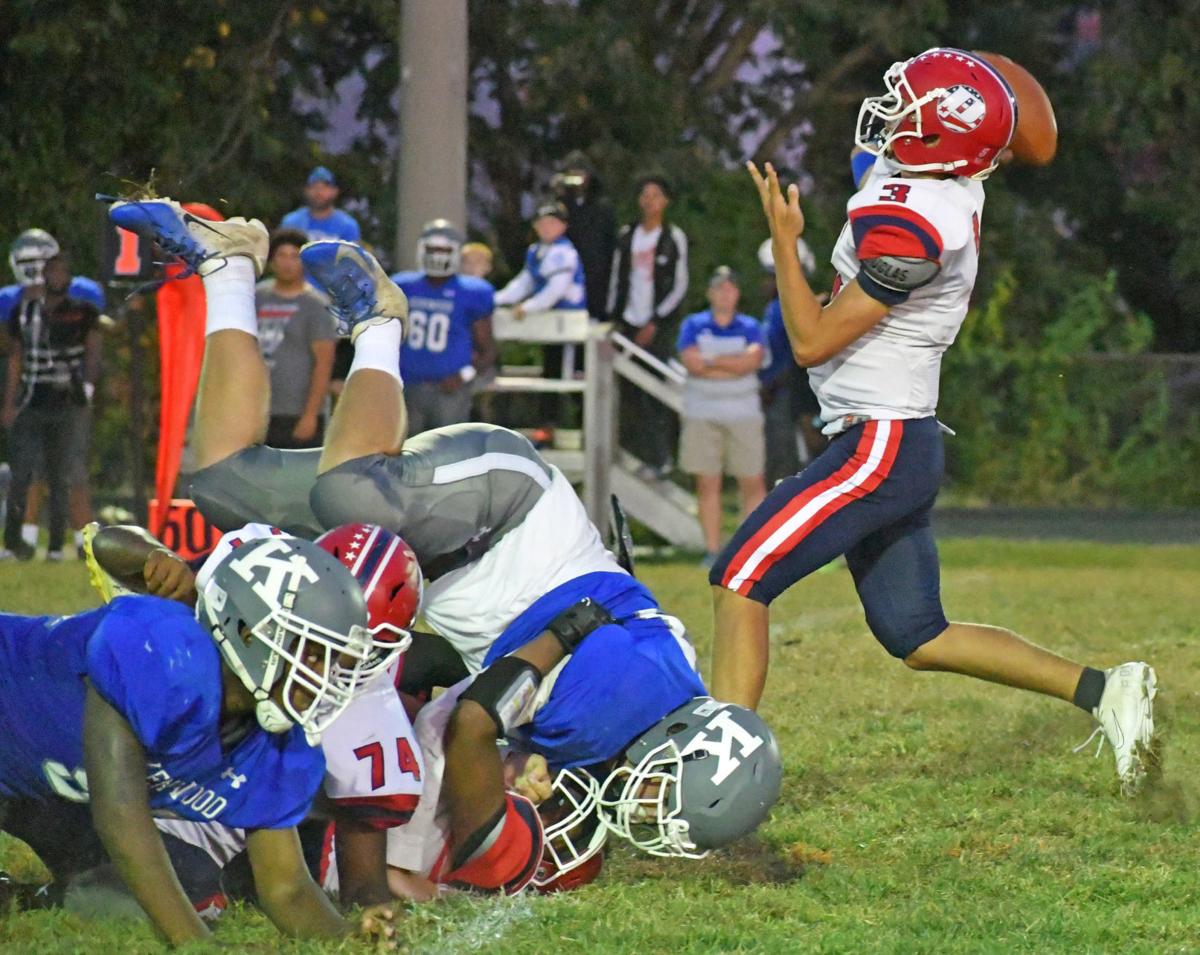 A.J. Ratliff attempts a pass while his offensive line piles up the Kenwood pass rush. 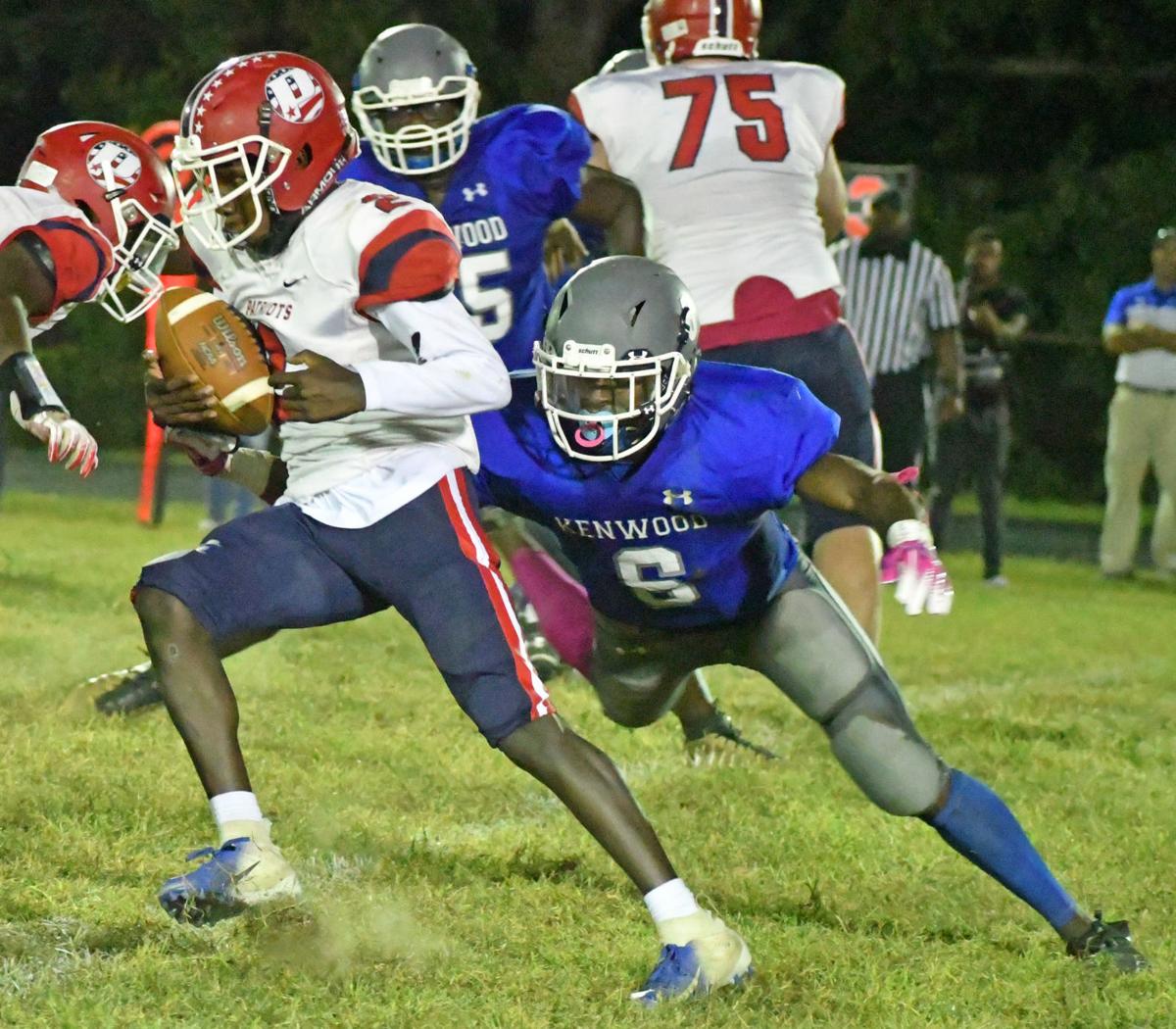 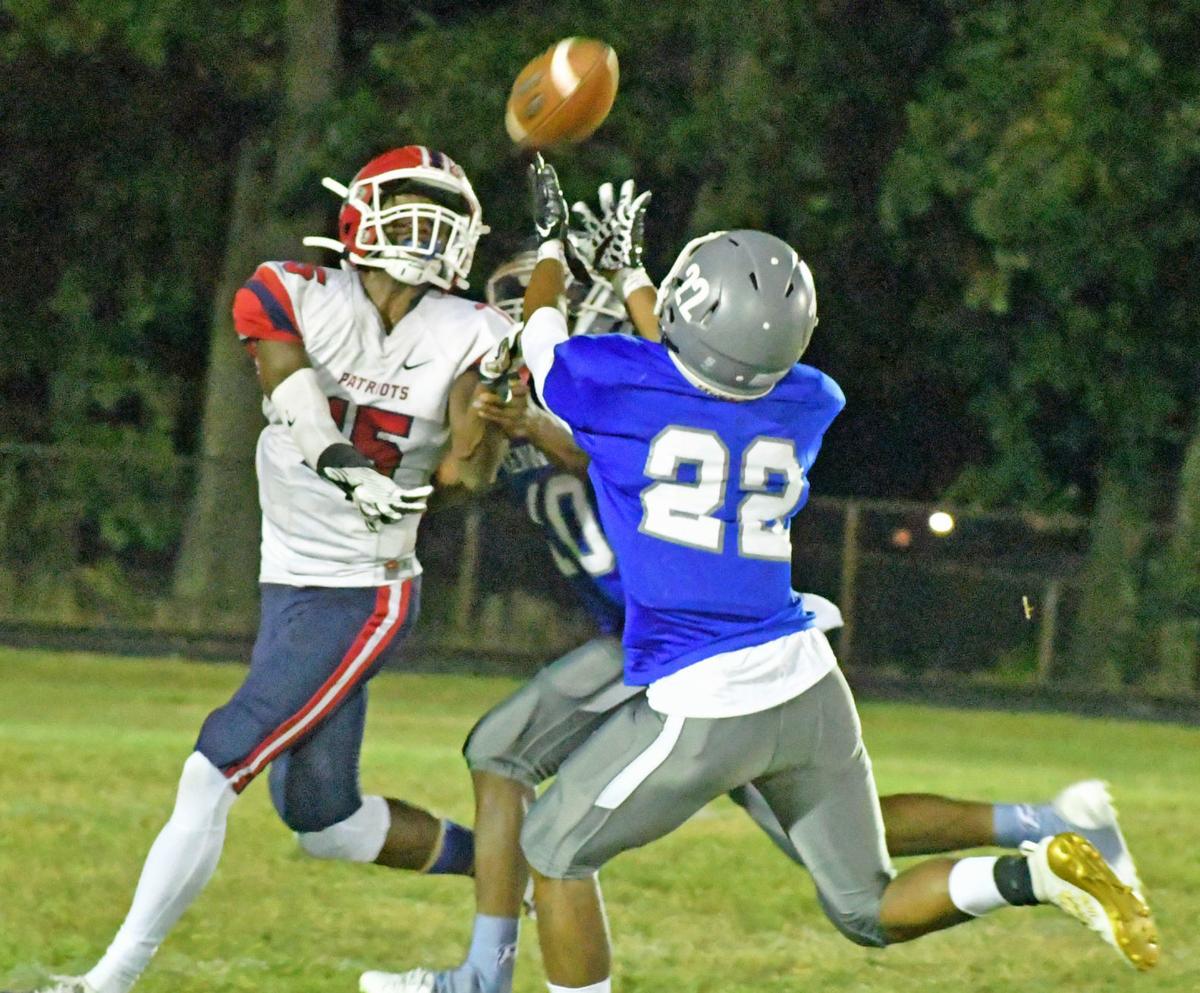 Maurice Williams catches a touchdown pass while being covered by two Kenwood defenders. 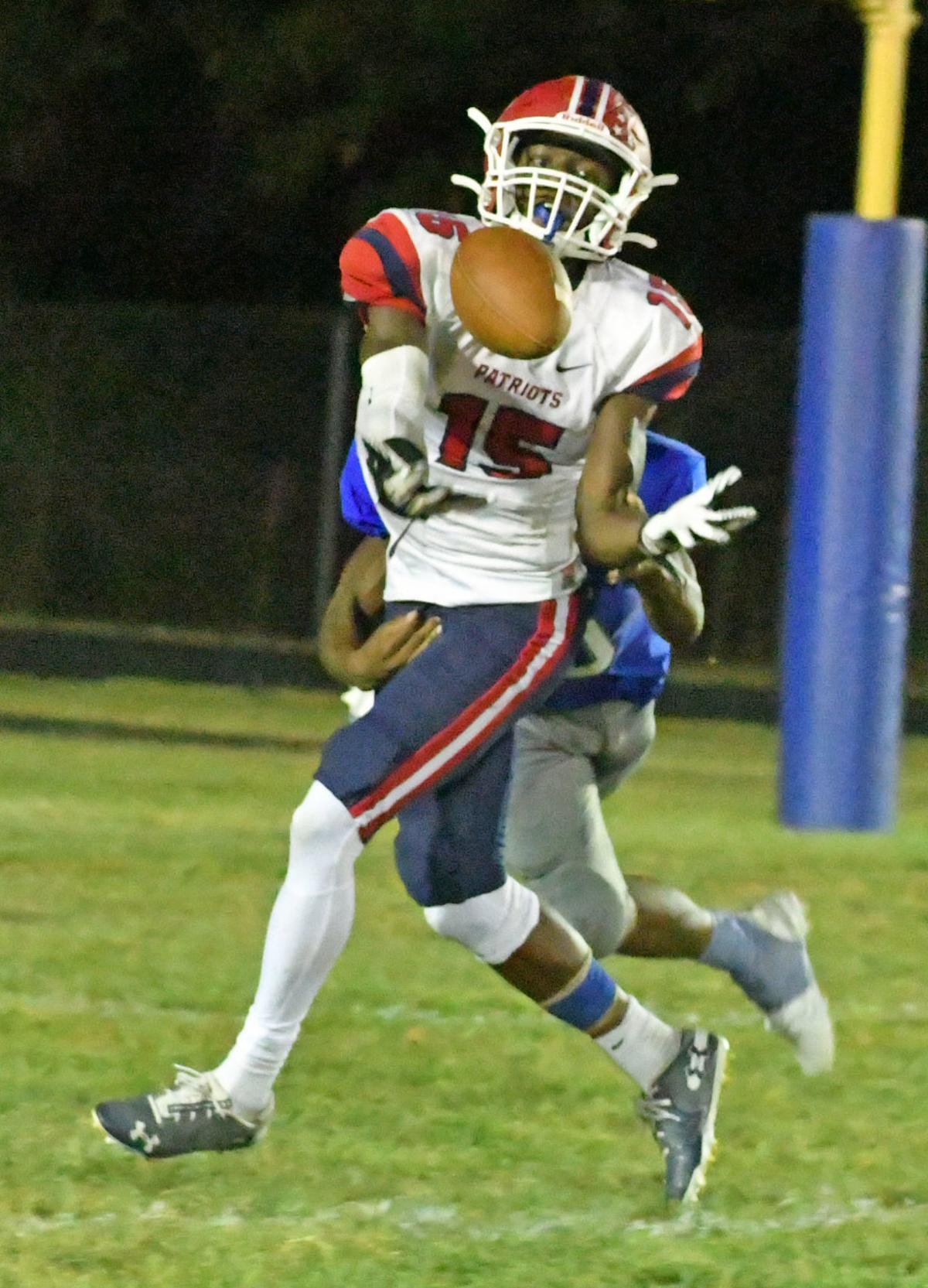 Maurice Williams bobbles the ball before securing it to complete a 39-yard touchdown pass.

A.J. Ratliff attempts a pass while his offensive line piles up the Kenwood pass rush.

Maurice Williams catches a touchdown pass while being covered by two Kenwood defenders.

Maurice Williams bobbles the ball before securing it to complete a 39-yard touchdown pass.

Patapsco was plagued by a simple progression when it played at Kenwood on Friday.

And it had all started so well ...

Patapsco blocked a Kenwood punt on the first possession of the game to start at the Bluebird 24-yard line.

Kenwood turned the ball over on downs at the Patapsco 25-yard line on its next possession, and that’s when thnigs started falling apart for the Patriots.

A blindside block penalty followed by a false start led to Patapsco punting from its own seven-yard line and Kenwood getting the ball right back at the Patriot 25.

It looked as if the punt had touched a Bluebird player and was recovered by Patapsco, but the officials ruled it had not touched any Kenwood players.

“I think the game turned on that play, but it didn’t define the game,” Patapsco coach Tyler Clough said. “It was a huge play at the time, but we had other opportunities to make plays and stop them on defense and we couldn’t do it.”

The Bluebirds scored in three plays and made the two-point conversion for an 8-6 lead.

On the ensuing kickoff, the Patriots watched as the ball seemed to be rolling out of bounds, but a Kenwood player recovered it at the Patapsco 28-yard line.

“We gave up too many short fields and got dominated in the field position battle,” Clough said. “Playing a good team like Kenwood who has athletes everywhere, you have to make them drive the field. Unfortunately, we didn’t do that enough.”

Kenwood started its next drive in its own territory after Patapsco punted from midfield.

The Bluebirds went 67 yards in four plays, scoring on a short pass over the middle that turned into a 55-yard touchdown.

A 39-yard touchdown pass from Ratliff to Williams with 24 seconds remaining in the first half made it 30-12 at halftime.

And now the Kenwood defense could pin its ears back and go after the passer, confident the pass was coming.

“When they knew we had to pass, they sent six-seven guys each time and we couldn’t pick it up,” Clough said.

Kenwood added three touchdowns in the third quarter, on a 40-yard punt return, a 49-yard drive and a 42-yard drive, to put the game under a running clock.

Patapsco (3-1) hosts Towson (2-2) on Saturday in a key game for the Patriots’ Class 3A North regional playoff hopes.

The Generals are coming off an 8-0 loss to Woodlawn, another Class 3A North team.

“We match up well with them athletically, but we have to stop their dive offense,” Clough said. “They’re so committed to what they do, they can limit you to three possessions in a half if you can’t get off the field.