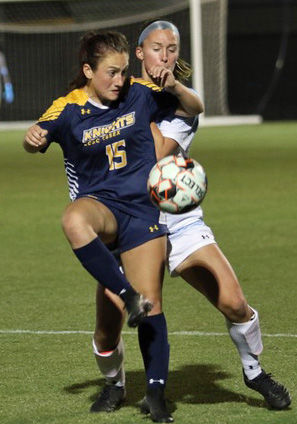 Ryleigh Fachler of CCBC Essex settles the ball during the loss to Gillette College in the NJCAA tournament. 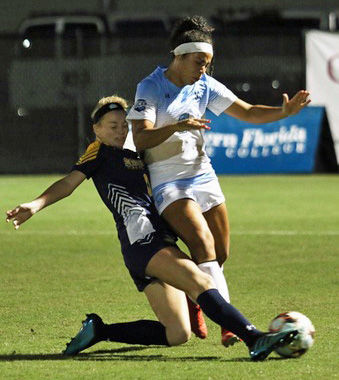 Ryleigh Fachler of CCBC Essex settles the ball during the loss to Gillette College in the NJCAA tournament.

The season ended for the CCBC Essex women’s soccer team with a 4-1 loss to Gillette (Wyoming) College in the National Junior College Athletic Association (NJCAA) tournament on November 19.

The loss left the Knights with an 0-2 record in pool play at the tournament, hosted by Eastern Florida State College.

Gillette lost to Eastern Florida State in the final game of pool play, sending the Titans to the tournament semifinals.

Essex finished with a record of 19-4. Two of their losses came against top-ranked Monroe (N.Y.) College, which fell to Tyler Junior College in the championship game, 4-1.

The Knights also lost to Eastern Florida State in the first game in pool play. The Titans were ranked second in the NJCAA, but lost to Tyler Junior College 2-1 in the national semifinals.

Essex opened the season with a loss to Monroe, then won 19 straight games before losing to Monroe in the district finals. Then came the two losses in the national tournament.

Essex opened the game with several strong looks on attack, but couldn’t convert any of its opportunities.

The Pronghorns (it’s a type of deer) extended their lead to 3-0 midway through the second half.

Kara Dietrich scored her nation-leading 52nd goal with 17 minutes remaining in the game to get Essex on the scoreboard, but Gillette added another goal with 13 minutes left to play.

Shots on goal were nearly even: 12 for Gillette to 11 for Essex. Pronghorn keeper Nia Trejo made seven saves.