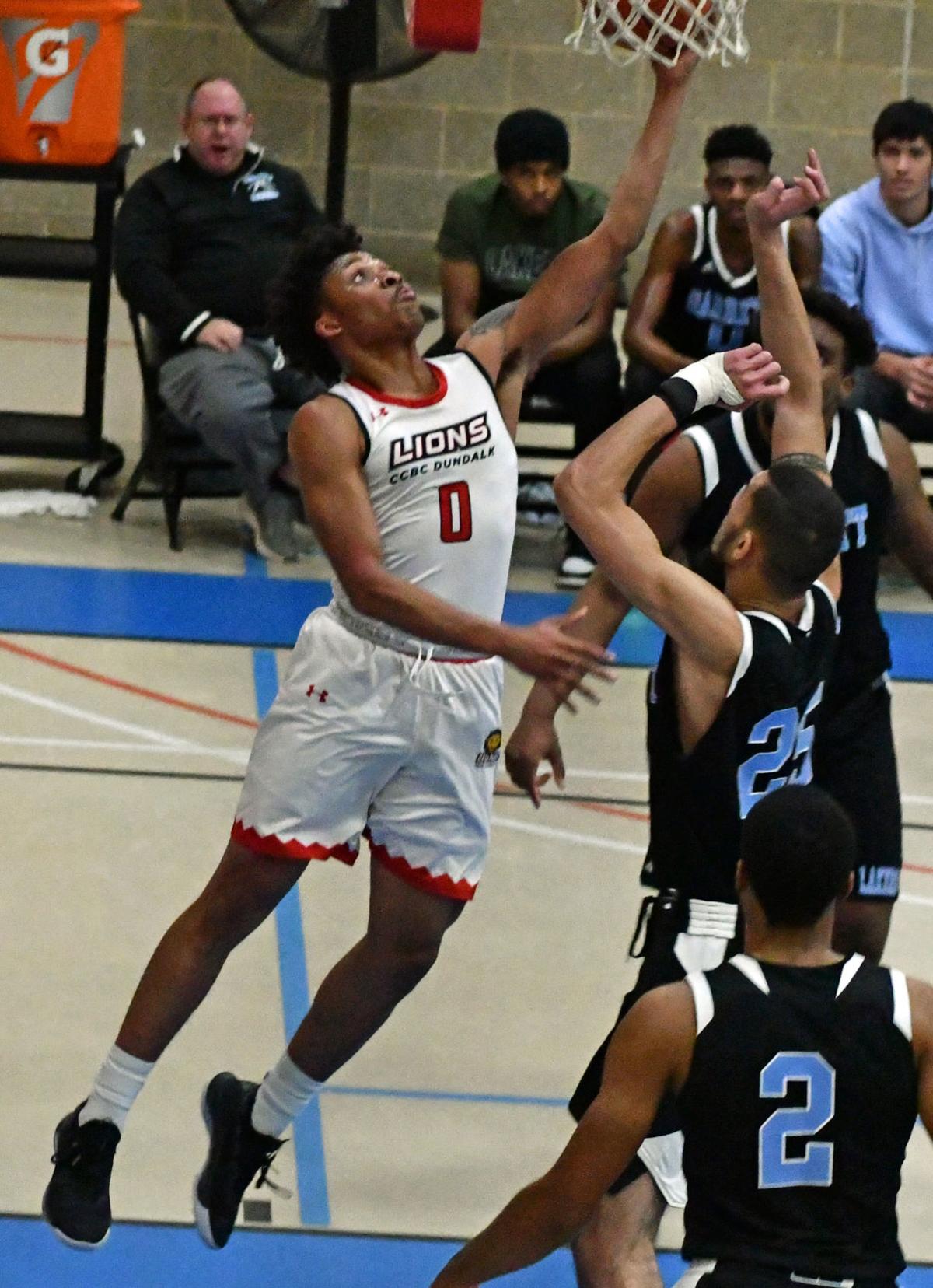 Allayassa Bray dunks the ball during the loss to Garrett County. 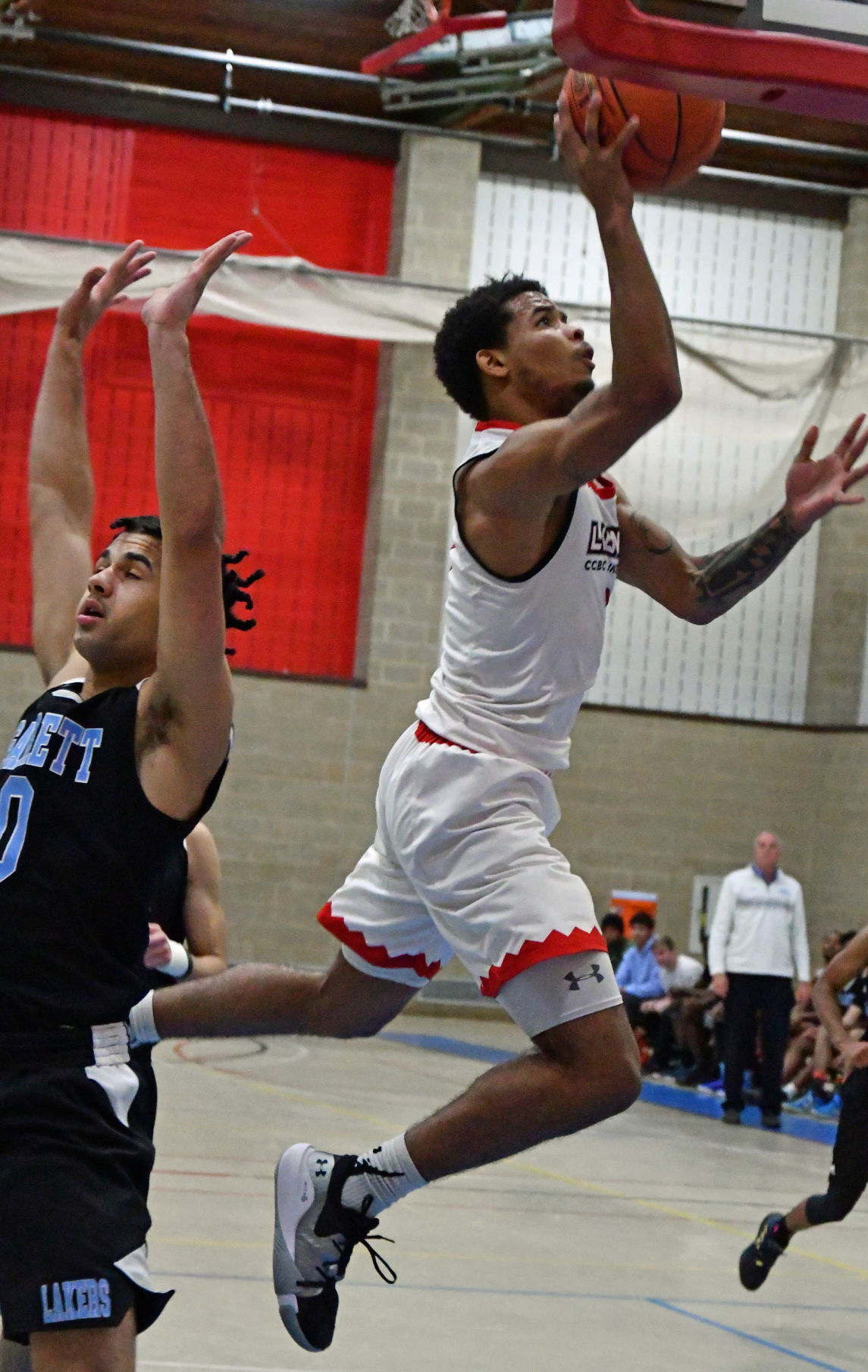 Malik McCormick drives past a Garrett County defender for two of his 13 points. 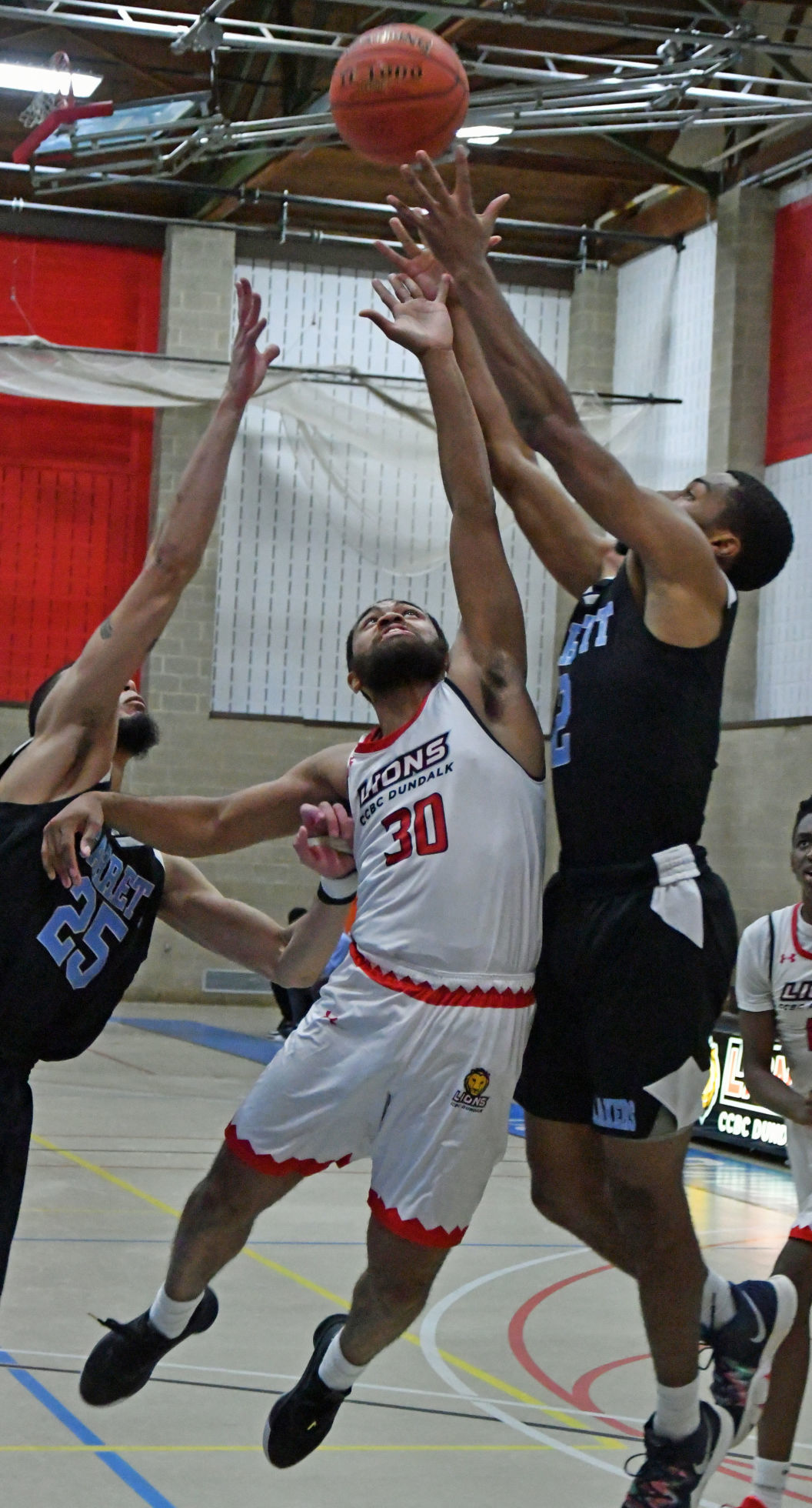 Allayassa Bray dunks the ball during the loss to Garrett County.

Malik McCormick drives past a Garrett County defender for two of his 13 points.

A scoring drought of nearly five minutes late in the second half brought an end to CCBC Dundalk’s unbeaten start on Saturday against visiting Garrett County.

The 76-68 loss brought an end to the Lions’ seven-game win streak to start the season.

Dundalk trailed 55-52 with 8:52 remaining after a layup by Christian Wright. By the time the Lions scored again, also on a Wright layup, there was 4:03 remaining in the game and the Lakers had a 69-54 lead.

The 14-0 run by Garrett (6-1) gave the visitors enough of a cushion to withstand a furious Dundalk chargewhen the Lions scored 10 points in the last miute of the game.

The Lakers’ winning surge was helped by the Lions suddenly going cold from beyond the three-point lime.

Dundalk missed six trtee-point attempts during Garrett’s 14-0 run, all of them on open shots at the basket.

Lions coach Jaron Taylor did not think his team was pressing in an attempt to make up the steadily-increasing deficit.

“We got a lot of really good looks,” Taylor said. “Christian Wright, with his driving and kicking the ball out, got us a lot of really food looks. We just didn’t knock them down.”

Taylor felt a loss was possible entering the game.

“We didn’t prepare well, practice was not the best this week,” he said. “The energy wasn’t there. We played on Tuesday up in Philadelphia, and didn’t play well.

“I thought we’d come back, regain our energy, but that wasn’t the case. Hopefully we can learn from this situation.”

After Wright’s drought-ending basket, the Lakers entered a slump of their own. Garrett went nearly three minutes without scoring, but Dundalk was only able to narrow the Lakers’ lead to 69-58 over that stretch.

Two free throws gave the Lakers a 71-58 lead with 1:45 remaining in the game. Dundalk got to within 74-68 with 19 seconds left in the game, but Garrett broke the Lions press for a layup and their first field goal in over four minutes.

Dundalk led through most of the first half, taking its largest lead of the game (22-13) with 10:46 left before halftime.

The Lions’ first seven points came at the foul line; the Lions did not get a basket until nearly four minutes into the game on a layup by Donnell Loud.

Dundalk led 29-22 with 7:38 left in the half after a three-pointer by Malik McCormick. A four-minute slump followed, during which the lakers took a 31-29 lead.

Tyshaun Walker tied the score with 3:50 remaining, then gave the Lions a 34-31 lead with a basket and a free throw.

Another Walker basket gave Dundalk a 36-33 lead at the half.

Despite the loss, Dundalk is only two wins away from matching last season’s win total (9-17).

The Lions started the season winning three games at the CCBC Dundalk mixer on November 1-3.

The Lions followed that by winning two games during a tournament at Patrick Henry Community College from November 9-10: a 94-82 victory over Cape Fear Community College, and an 84-71 win over the host school.

Dundalk won at Cheyney University of Pennsylvania 80-69 on November 19.

Against Garrett, Walker led the Lions with 19 points. McCormick and Wright each scored 13.

“We’ve been waiting for our defense to catch up with our offense,” Taylor said. “We’ll have lapses like today, and we still should have won this game. We had too many unnecessary fouls, guys out of position on defense in the second half.”

In a pre-season poll, Maryland JuCo coaches had Garrett and Montgomery tied for fifth in the 15-team league, with Dundalk 11th.

Taylor feels the Lions are as good as their 7-1 start and will be competitive in the league and the region.