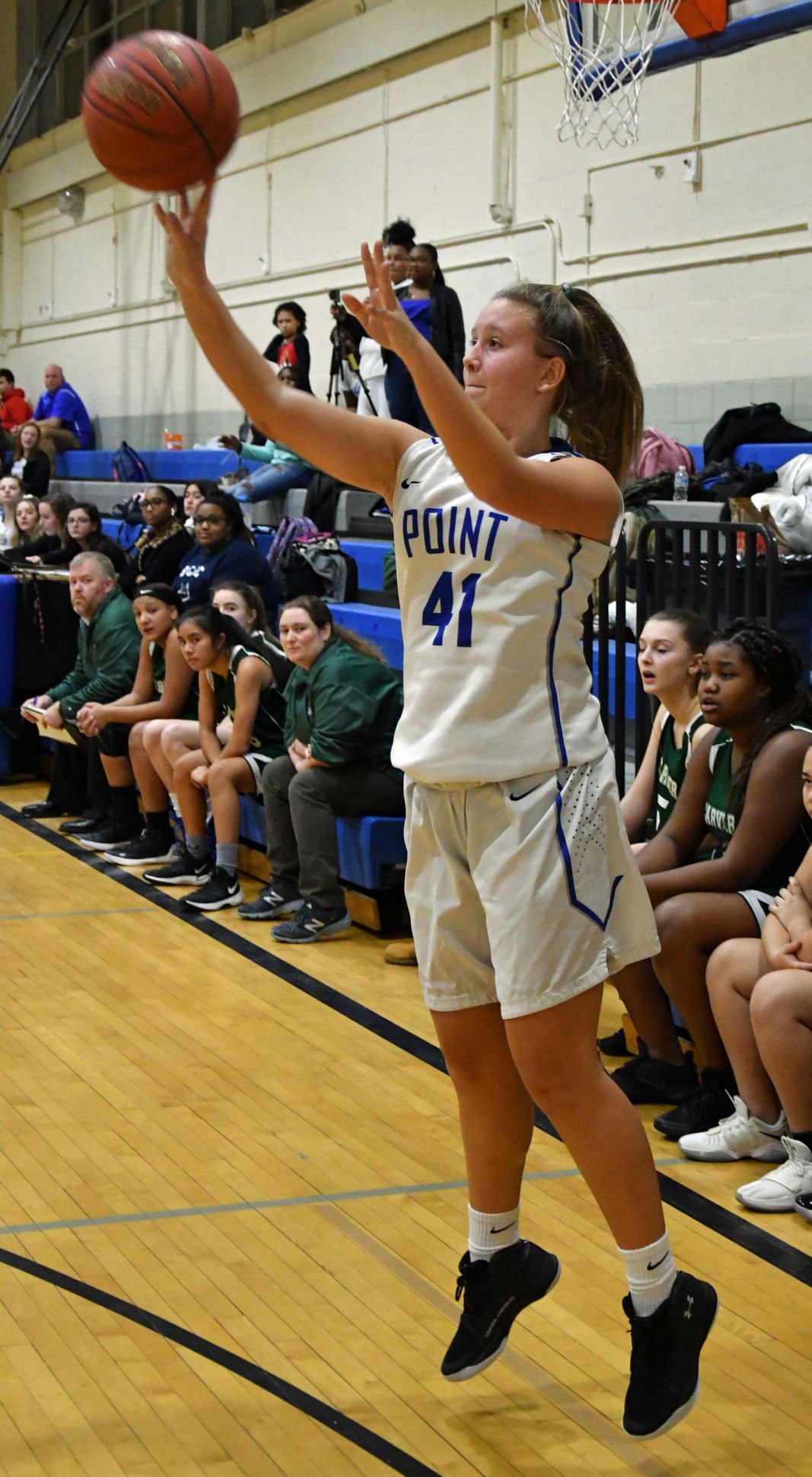 Mackenzie Lookingland puts up a shot during the loss to Carver A&T. 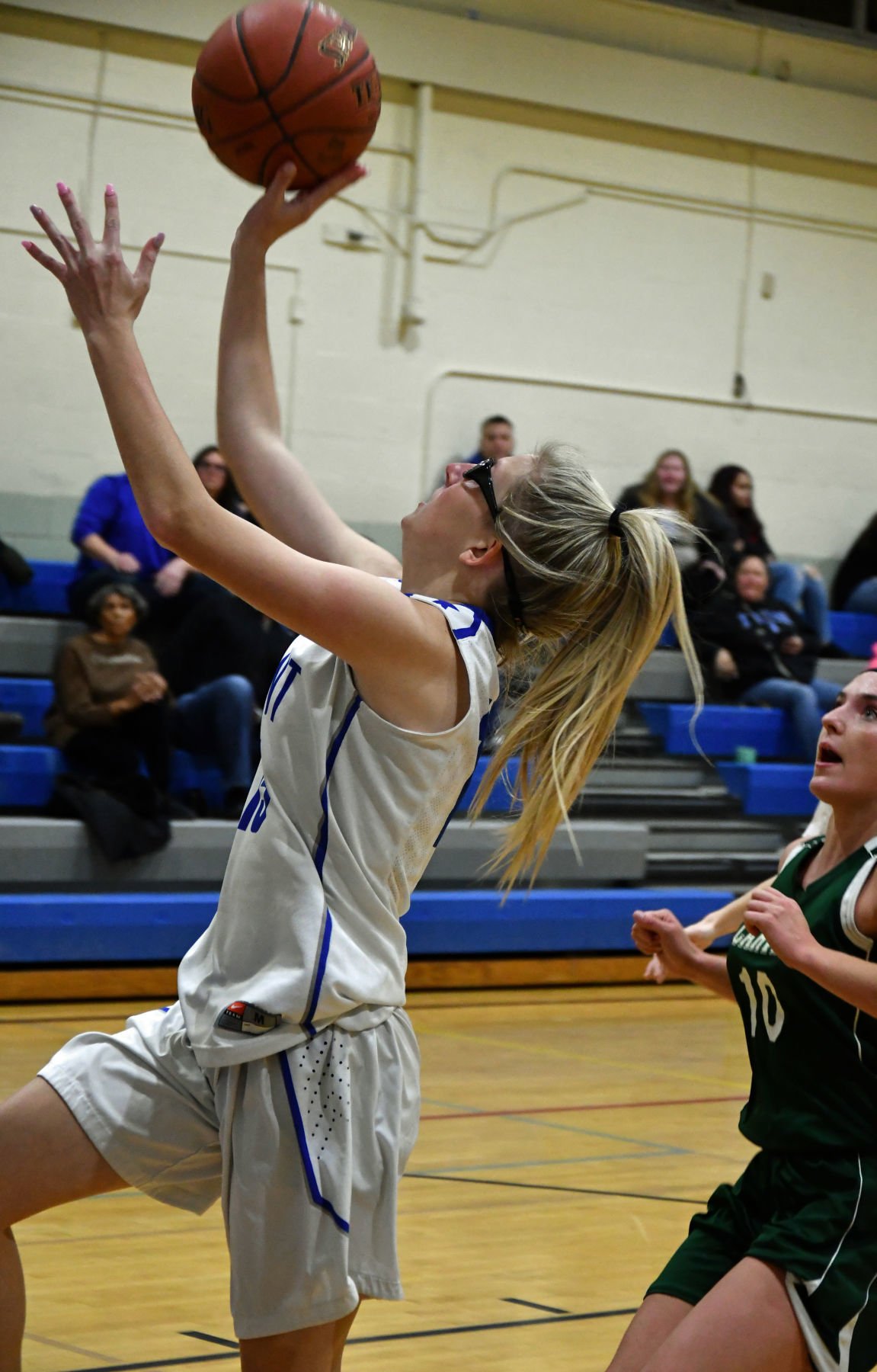 Bailey Arnett drives to the basket against Carver A&T. 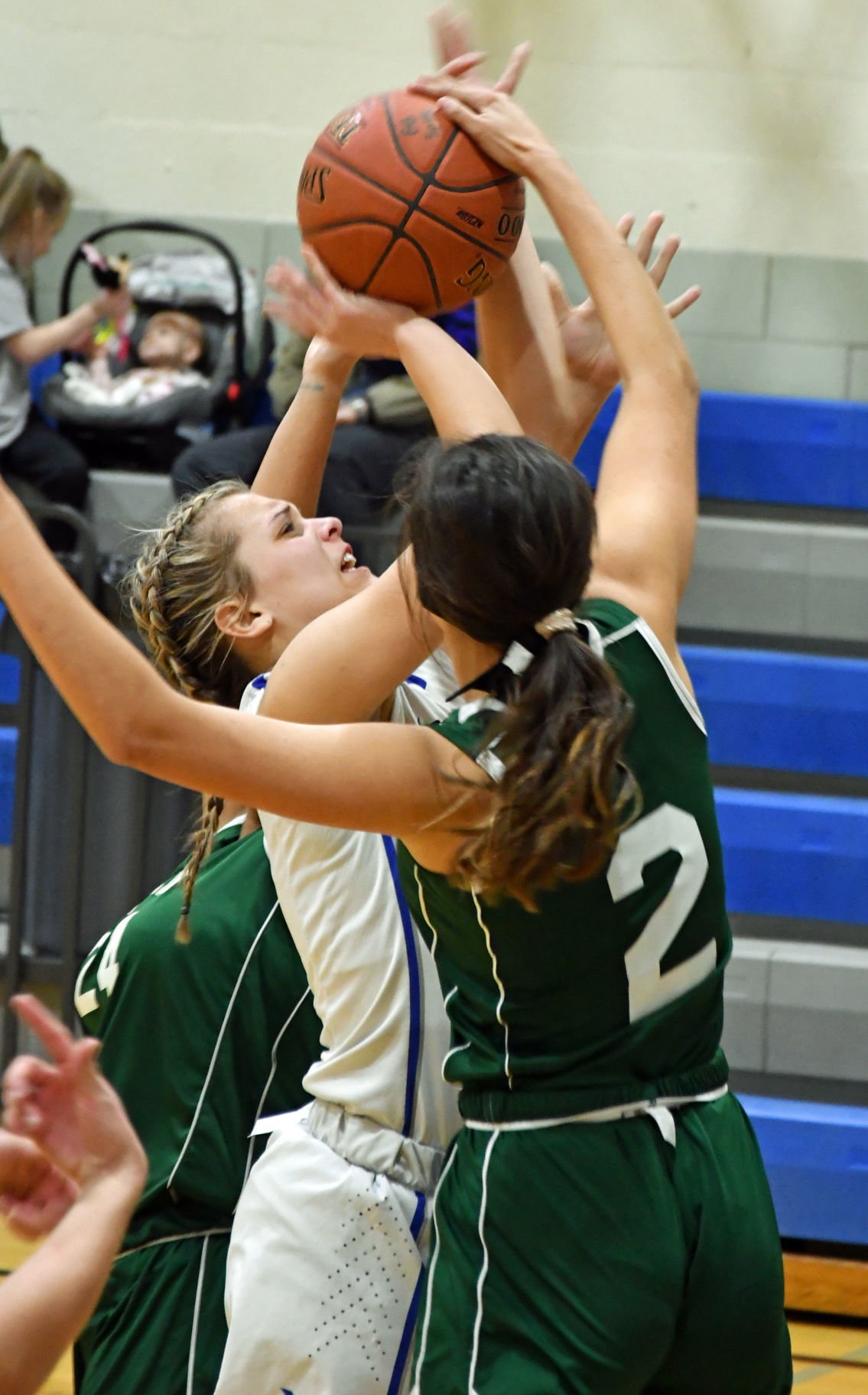 Ava Johnson meets some resistance from the Carver A&T defense. 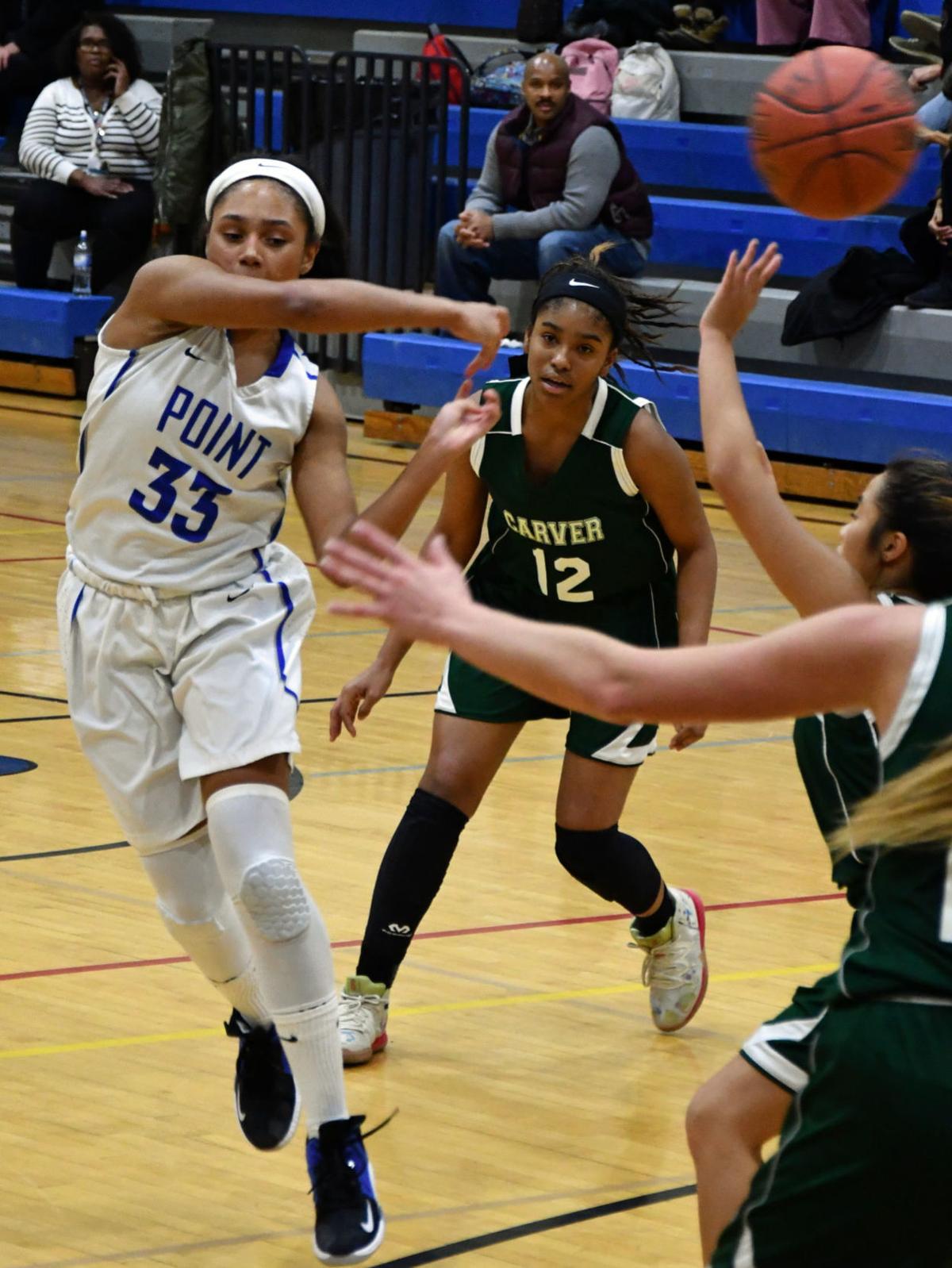 Jordan Wood makes a ‘no-look’ pass during the loss to Carver A&T. 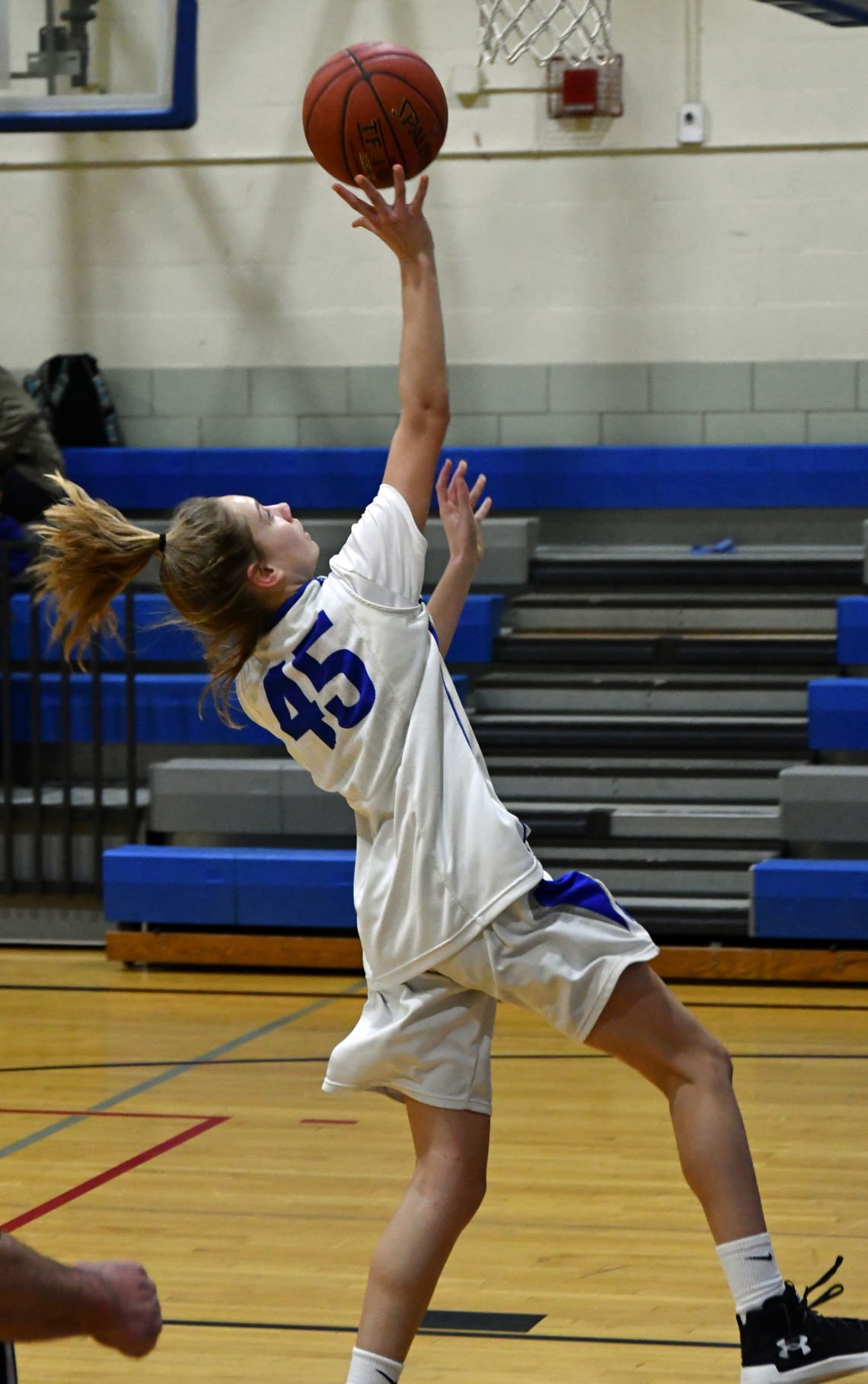 Mackenzie Lookingland puts up a shot during the loss to Carver A&T.

Bailey Arnett drives to the basket against Carver A&T.

Ava Johnson meets some resistance from the Carver A&T defense.

Jordan Wood makes a ‘no-look’ pass during the loss to Carver A&T.

The Sparrows Point girls basketball team had its first victory of the season within its grasp – and then it lost its touch.

Its shooting touch, to be precise. The Pointers did not have a field goal for the final nine minutes of the game against visiting Carver A&T on Friday, letting a six-point slip away to a six-point loss, 40-34.

Sparrows Point (0-11) led throughout the game until Carver A&T took the lead with four minutes remaining and steadily pulled away.

All four points came on free throws. The Pointers missed all 17 of its shots in the fourth quarter and were four-for-12 from the foul line.

A six-point lead seemed secure against a team that scored 24 points in the game’s first 24 minutes — providing you maintained your scoring pace.

Of particular frustration for the Pointers: many of the missed shots came from near the basket. They also had seven turnovers in the fourth quarter.

Shooting has been a problem for the young Pointer team all season, with Sparrows Point not yet reaching 40 points in a game this season.

(Sparrows Point has no seniors; seven juniors, three sophomores and a freshman.)

But after finishing the first three quarters with 30 points, Sparrows Point was on pace to reach 40 until everything seemed to go wrong in the last eight minutes.

Sparrows Point led by six and eight several times over the first three quarters but just couldn’t get the surge it needed to pad its lead.

The last one hurt. The basket by Jayda Robinson that gave the Pointers that 30-22 lead with a little more than a minute remaining in the third quarter was Sparrows Point’s last basket of the game.

The Pointers missed their last three shots of the quarter, ending the game on an oh-for-20 streak. A couple of those shots go in, and the losing streak likely ends.

The Pointers were to play at two-win Patapsco on Wednesday. After playing at New Town on Friday, the Pointers host winless Dundalk on Feb. 5.

After playing Sparrows Point, the Patriots play at Hereford and at Carver A&T before hosting Milford Mill on Feb. 7.