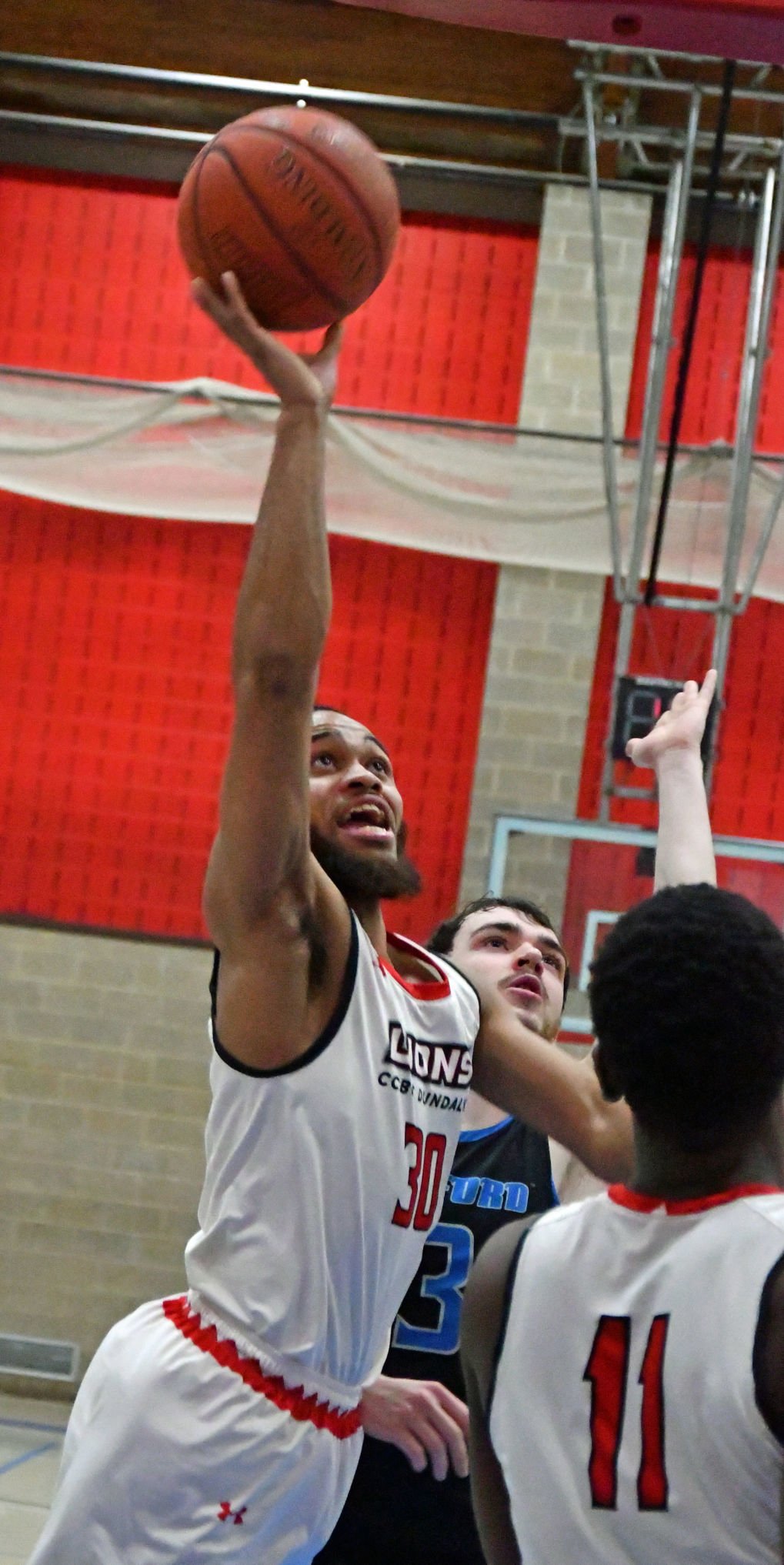 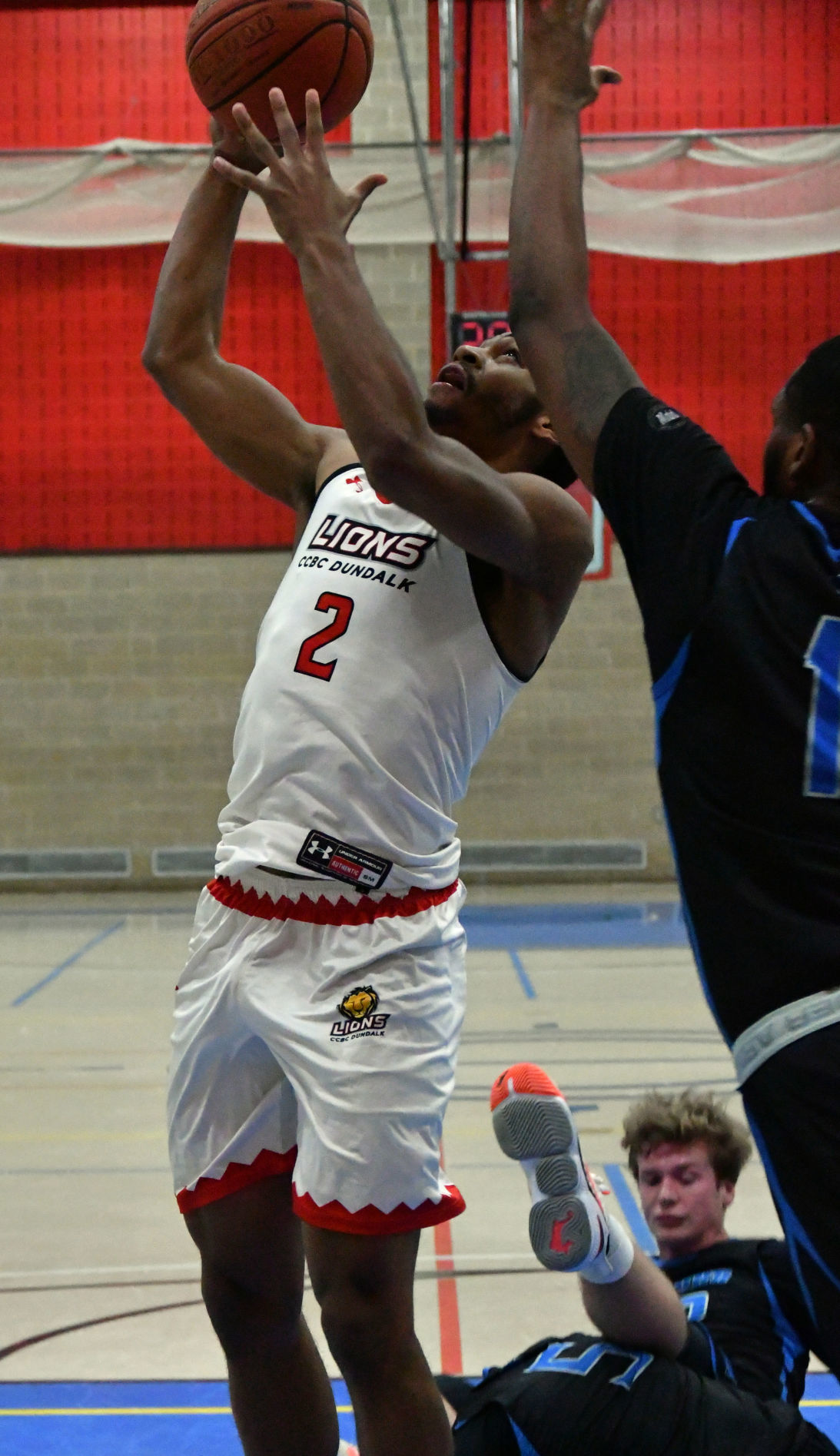 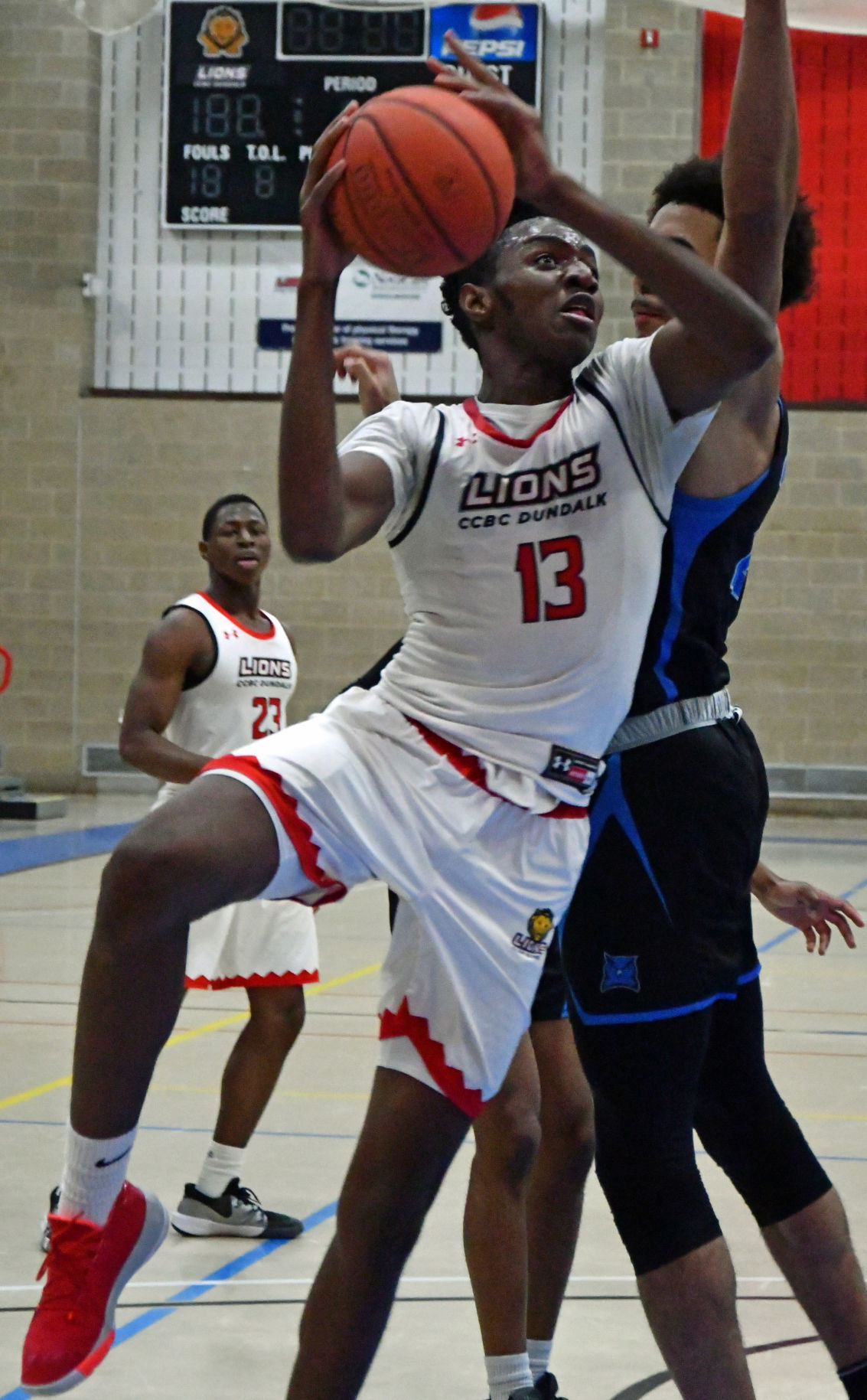 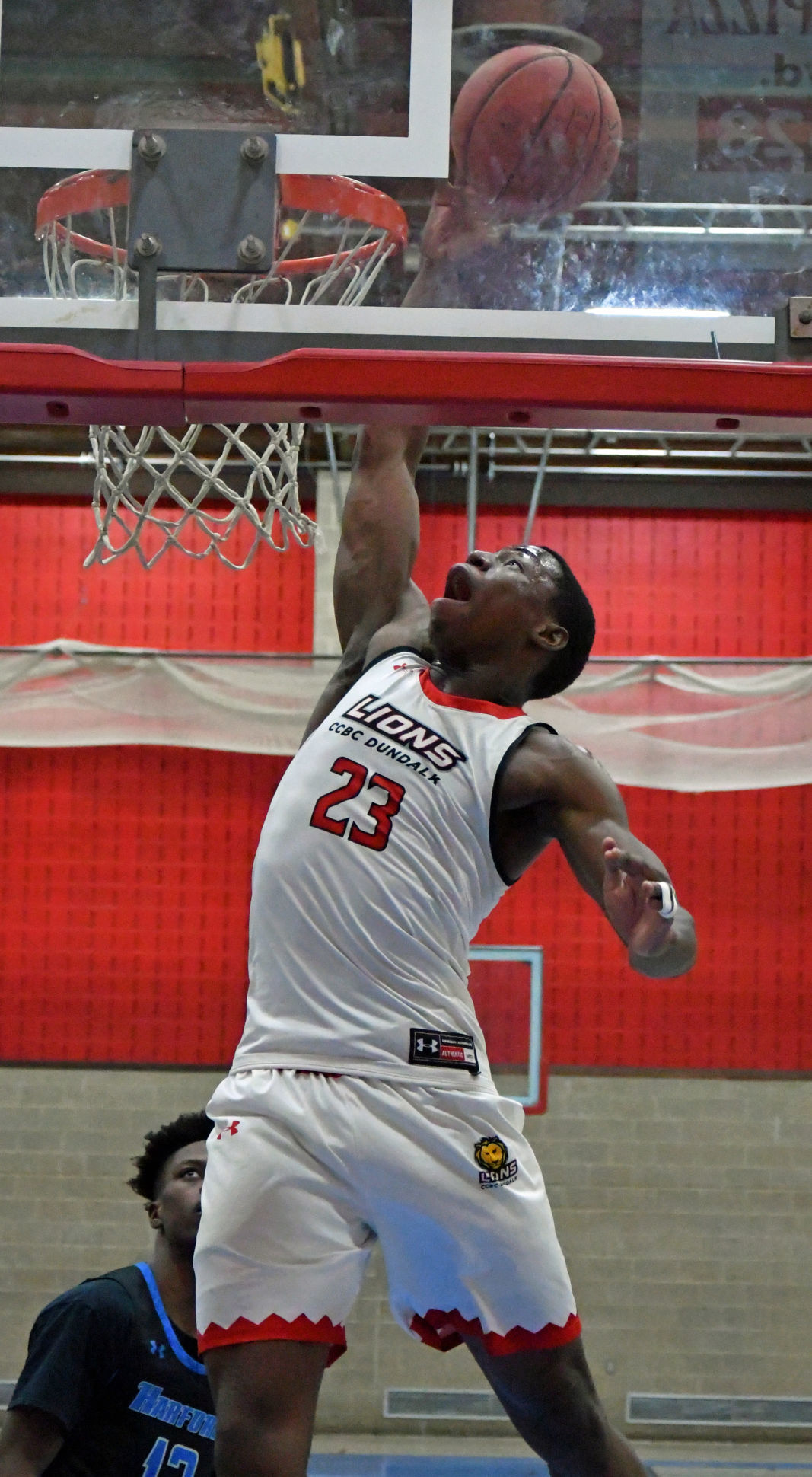 Ibraheem Bundu scores on a layup during the win over Harford. 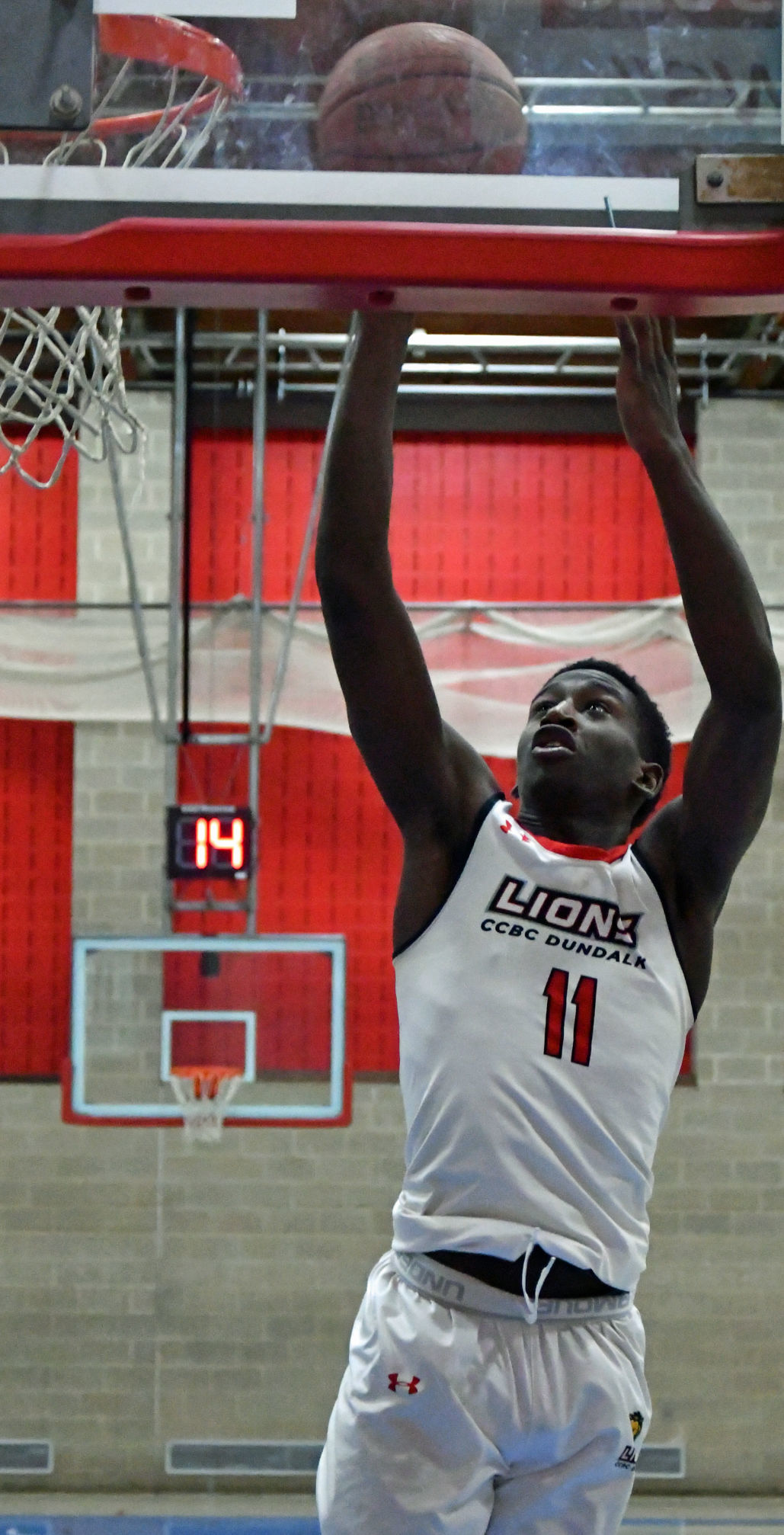 Allayassa Bray beats the Harford defense for an uncontested layup.

Ibraheem Bundu scores on a layup during the win over Harford.

Allayassa Bray beats the Harford defense for an uncontested layup.

The CCBC Dundalk men’s basketball team started the new year with five straight wins against Maryland JuCo League opponents before falling by one point at Cecil County on Monday.

That left the Lions with a 14-6 record, and in fourth place in the conference with a 6-2 mark.

Dundalk had handed Howard County (15-4) its first conference loss on Saturday, 83-82, on a last-second score by Dana Strothers.

The game was close from start to finish. The Dragons led by six several times early in the first 12 minutes of the game, but was unable to extend it any further.

The Cecil County finish wasn’t quite as dramatic. The score was tied 72-72, until Cecil made a three-pointer with 1:05 remaining in the game.

A Wright layup got Dundalk to 75-74 with 35 seconds remaining, but another game-winning shot in the final second didn’t happen as the Lions didn’t get off another shot.

An 80-74 Lions win over visiting Harford County on Jan. 22 almost had some unwanted drama for Dundalk.

Dundalk appeared to have the game well in hand, leading 71-58 with 2:30 left to play. But with the help of a trio of three-pointers, Harford cut its deficit to 77-74.

Fortunately for the Lions, only seven seconds remained in the game. Jayson Mouzon was fouled and made both free throws, Harford missed a three-pointer, and Wright added another free throw for the final margin.

Walker and Wright finished with 20 points each, while Bundu had 15. He also had 22 rebounds and three blocks.

McCormick led the scoring against Howard with 20 points. Wright scored 18, while Strothers and Ibraheem Bundu each scored 11 and Mohamed Bundu added 10.

Malik McCormick and Christian Wright made three-pointers during the Lions’ run. Dana Strothers added a layup.

The Lions maintained their lead through much of the second half, with a high point of 59-48 near the midway point.

Trailing 82-77 with 50 seconds left to play, Wright converted a three-point play to make it a one-possession game, 82-80.

A missed free throw on the front end of a one-and-one by Howard gave the Lions an opportunity with 35 seconds remaining after Tyshaun Walker grabbed the rebound.

The Dragons missed the front end of another one-and-one with 21 seconds left, with Strothers controlling the rebound.

Wright was fouled with 16 seconds left, made the first, missed the second, but rebounded his own miss.

Dundalk held the ball for the last shot, missed, and Wright tipped it in at the buzzer for the win.