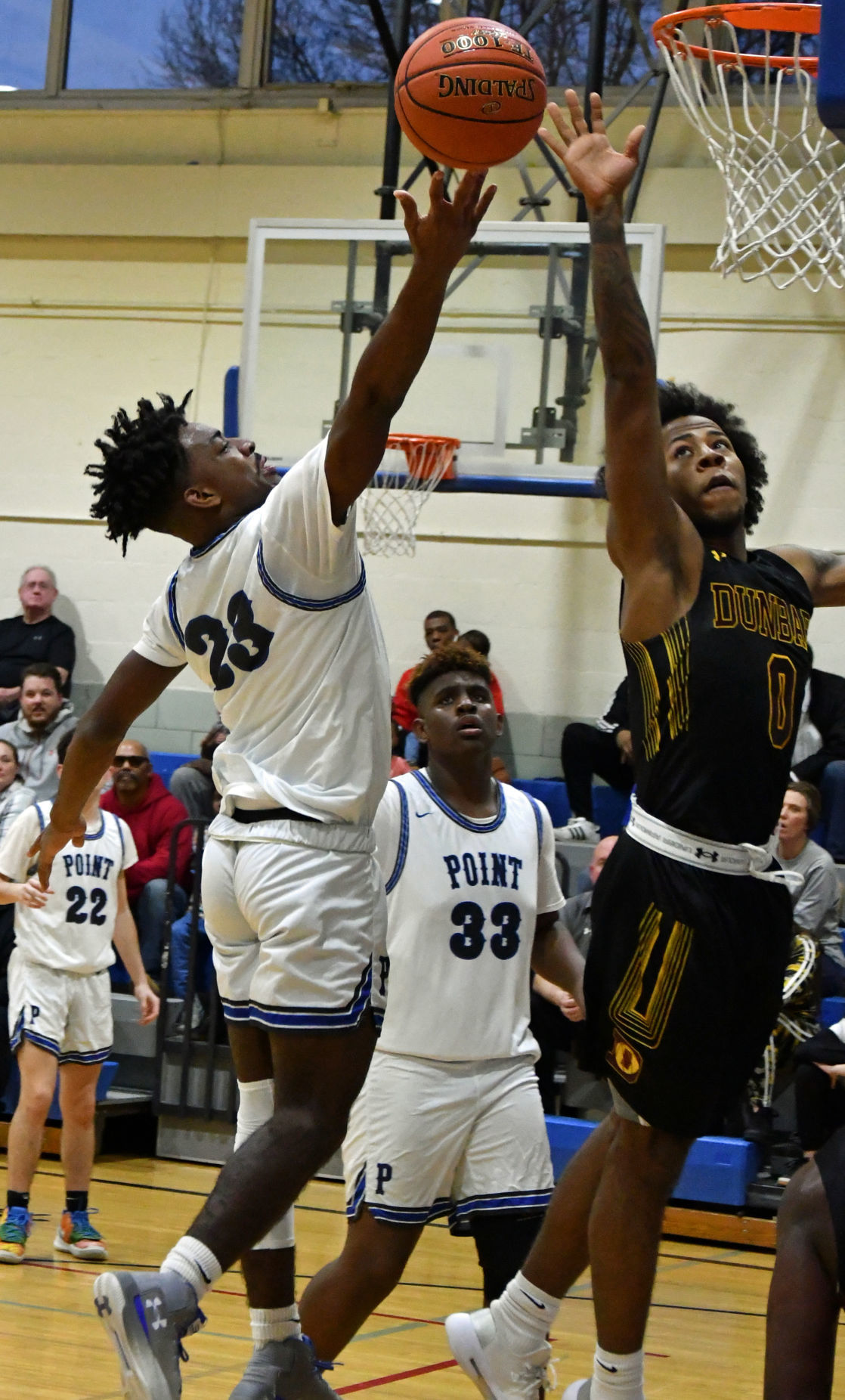 Jermaine Smith tries to get a shot past a Dunbar defender. 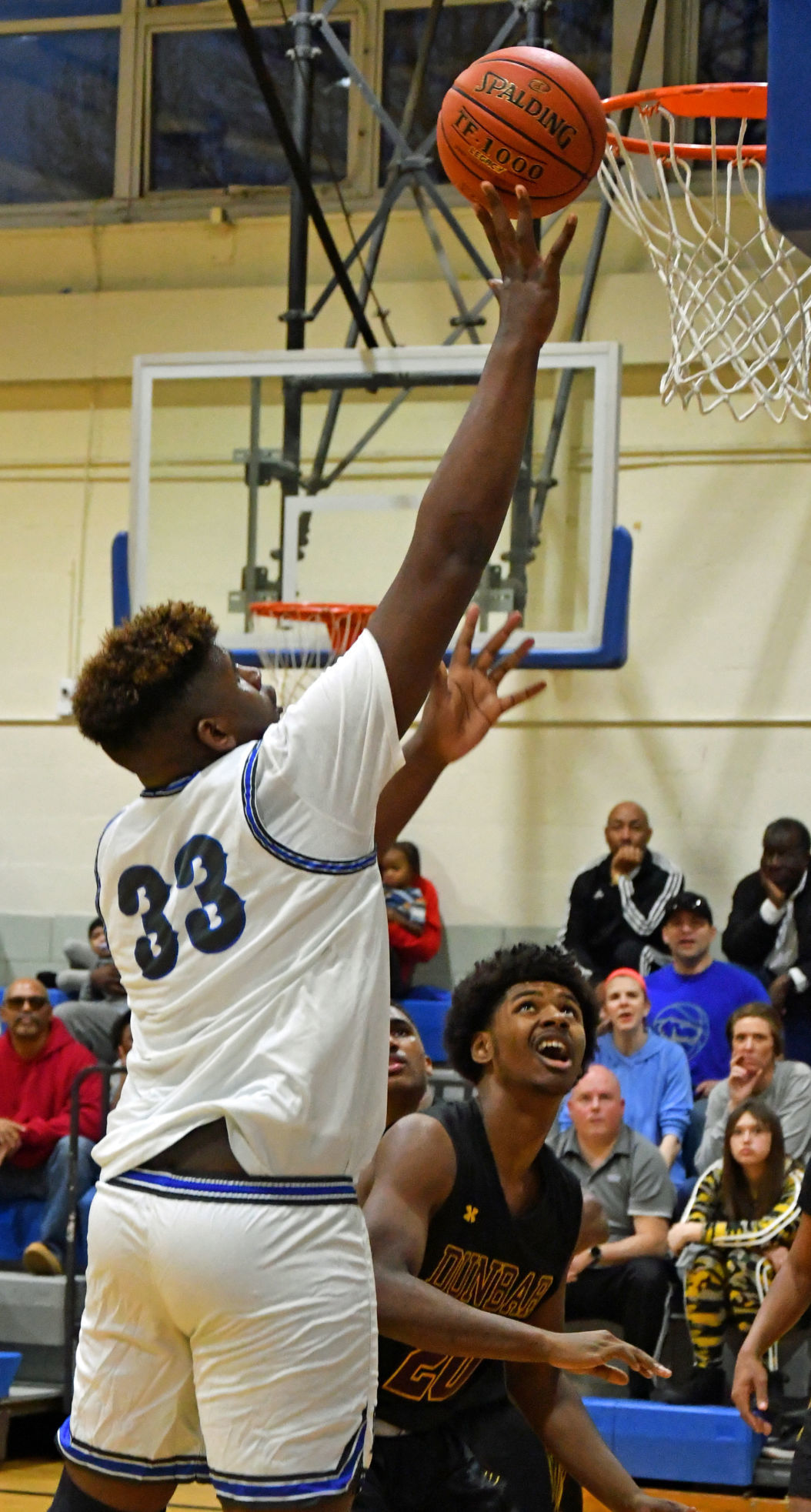 Omar Reid scores on a layup during the playoff loss to Dunbar. 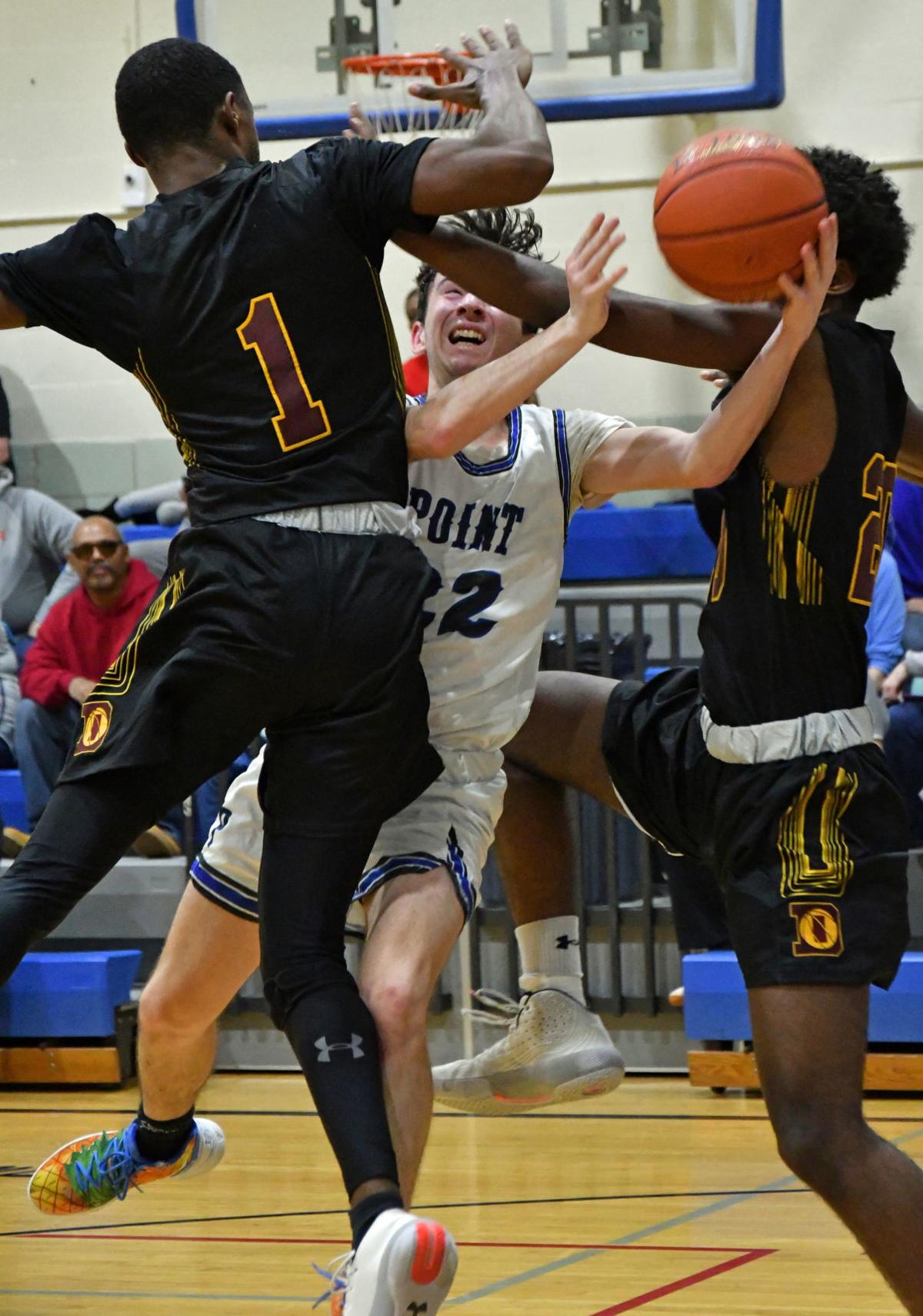 Peyton Conn is fouled while attempting to drive to the basket against Dunbar. 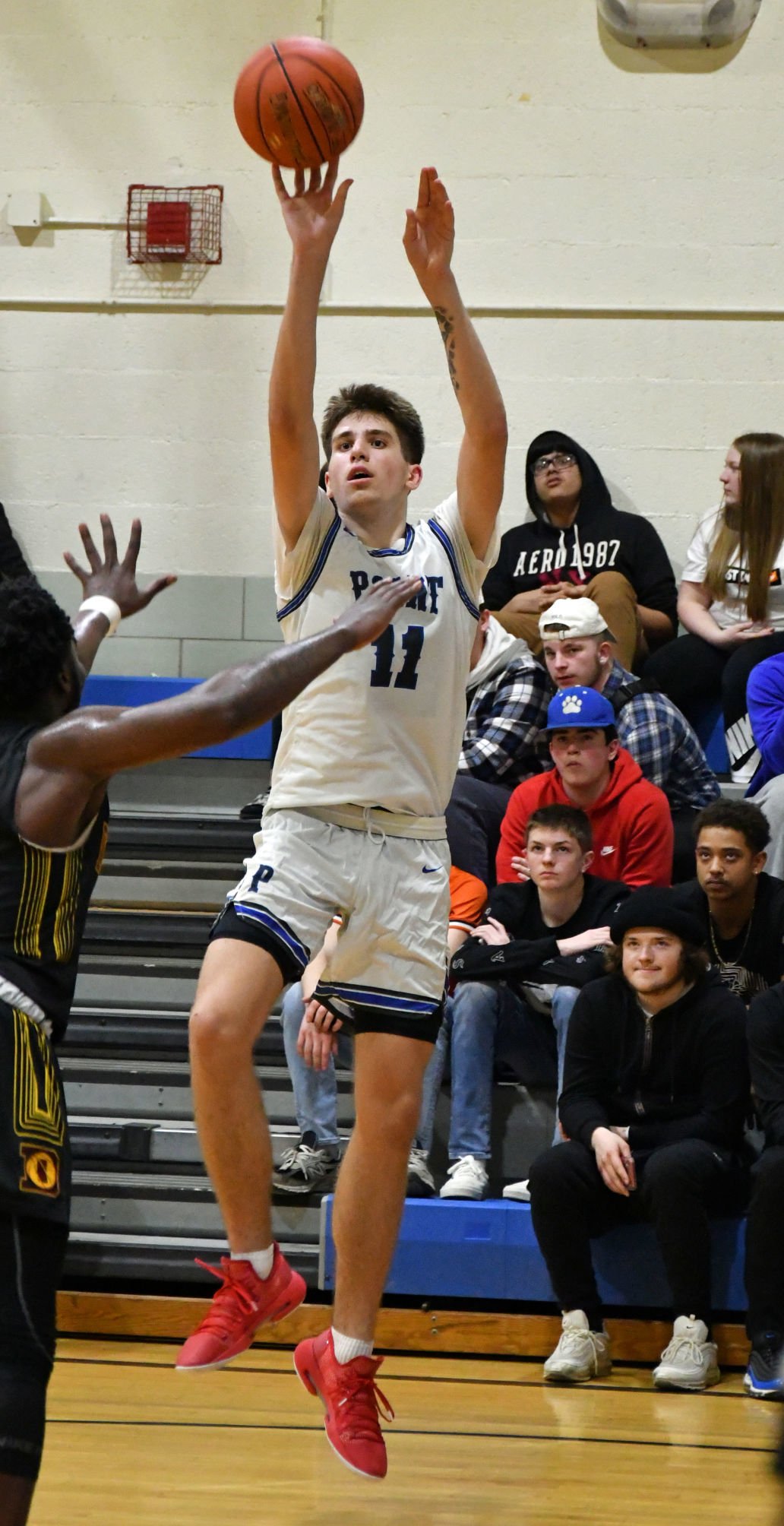 Ramon Villanueva puts up one of his six three-pointers against Dunbar.

Jermaine Smith tries to get a shot past a Dunbar defender.

Omar Reid scores on a layup during the playoff loss to Dunbar.

Peyton Conn is fouled while attempting to drive to the basket against Dunbar.

Ramon Villanueva puts up one of his six three-pointers against Dunbar.

As the Class 2A North Region II semifinal approached halftime, it appeared Sparrows Point would only be trailing visiting Dunbar by seven points.

Then, in the last seven-tenths of a second of the first half, the entire game changed.

The Poets scored seven points with under a second remaining in the first half to take a 34-18 lead into halftime.

Sparrows Point, which had hung with Dunbar through the first half, never recovered and eventually lost 73-52.

“That had a major impact on the game,” Sparrows Point coach Marcel Marshall said. “Coming at the end of the first half, that caused a shift in momentum for our entire team.”

With seven-tenths of a second left in the first half, Dunbar attempted a three-pointer, missed, but drew a foul.

Protesting the foul, a Sparrows Point player slammed the ball to the court and drew a technical foul.

Dunbar was successful on four of the five foul shots. Then, retaining possession due to the technical foul, the Poets managed to inbounds the ball and attempt another three-pointer before time expired.

The ball hit the rim, bounced high in the air, and dropped through the hoop.

Prior to that last second, Sparrows Point had seven possessions with an opportunity to make the score 27-20. On the seventh, a Pointer driving to the basket was fouled while being stripped of the ball.

The foul wasn’t called, the steal stood, and led to the game-altering sequence.

Prior to that last second, Dunbar had not scored in three minutes and had not had a field goal in over four minutes.

“They are a speed team, and we waned to slow down the tempo,” Marshall said. “They get rebounds, push the ball upcourt, get a lot of second-chance opportunities.

“We were definitely hanging with them. That last second going into halftime just changed the whole dynamic if the game for us.”

The Poets opened the third quarter with a 13-2 run, and suddenly the Pointers were trailing 47-20 and the game was sprinting out of their reach.

During one stretch of the Dunbar surge, the Poets stole the ball on four straight Pointer possessions.

Sparrows Point held its own against the Poets for the rest of the game, but more was needed to cut into a 27-point deficit.

A 6-0 run at the end of the third quarter was the Pointers’ longest scoring surge of the game — and was promptly followed by a 9-3 Dunbar run.

Ramon Villanueva led Sparrows Point with 26 points; 18 points came on three-pointers as the Pointers struggled to score inside due to the Poets’ swarming defense.

Sparrows Point went scoreless for the first four minutes of the game, during which Dunbar went ahead 7-0.

A three-pointer by Villanueva got Sparrows Point on the board.

A follow-up by Reid and another Villanueva three made the score 13-8, Dunbar, at the end of the quarter.

Smith opened the second quarter with a three-pointer to cut Dunbar’s lead to 13-11, but that was as close as Sparrows Point would get for the rest of the game.

A Conn three-pointer kept the Pointers within 21-16 with 4:36 left in the half, but the Poets immediately answered with a three of their own.

That would be Dunbar’s last basket until that last seven-tenths of a second. Unfortunately for the Pointers, they only had two Villanueva free throws during that span.

Sparrows Point (10-9) had been the top seed. Fourth-seeded Dunbar (10-10) went on to beat third-seeded Patterson for the Region II title 61-50 before losing to top-seeded Wicomico in the state quarterfinals 67-58.