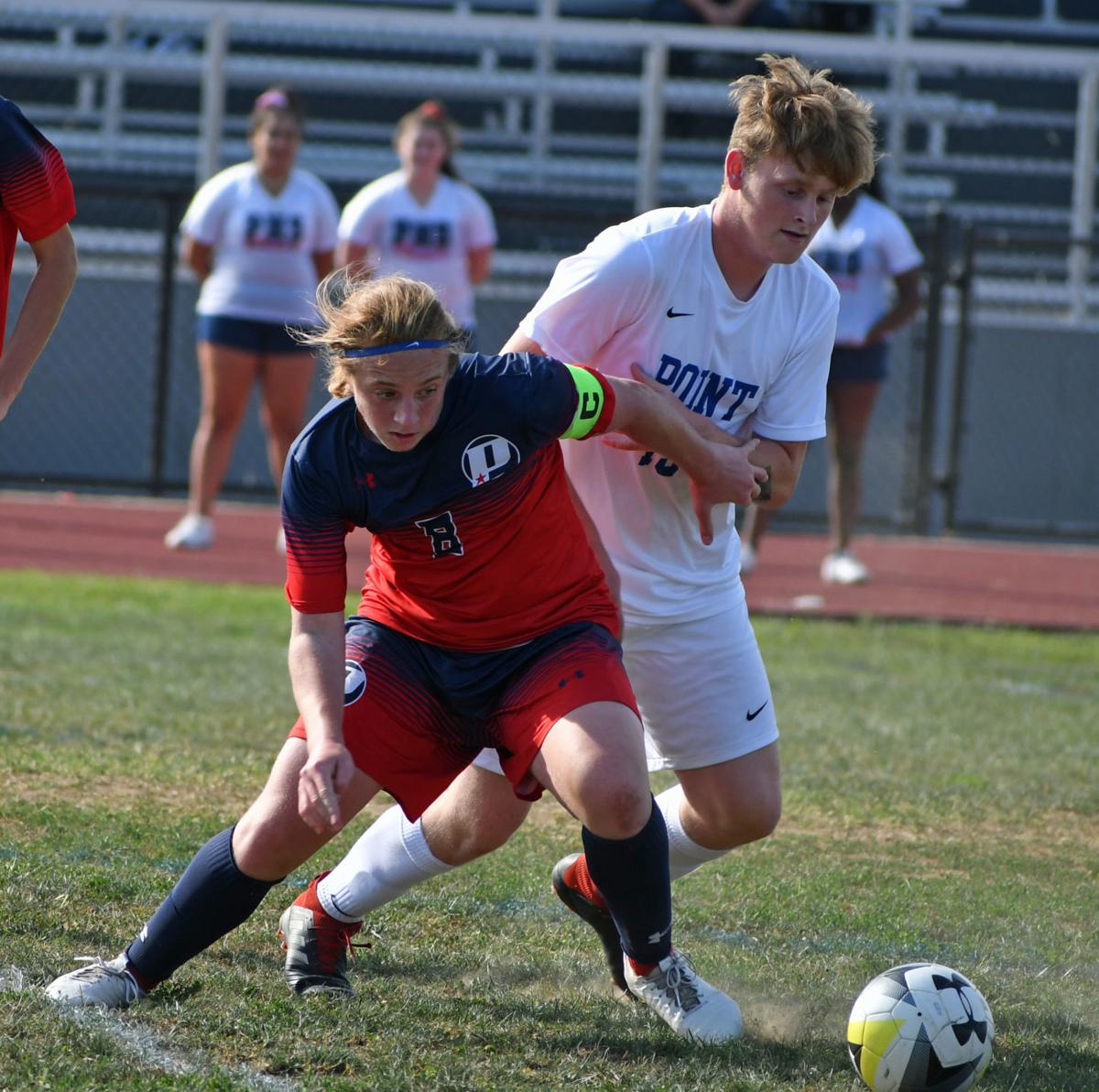 Steven Fulton of Patapsco and Sparrows Point’s Josh Lynch battle for possession of a loose ball. 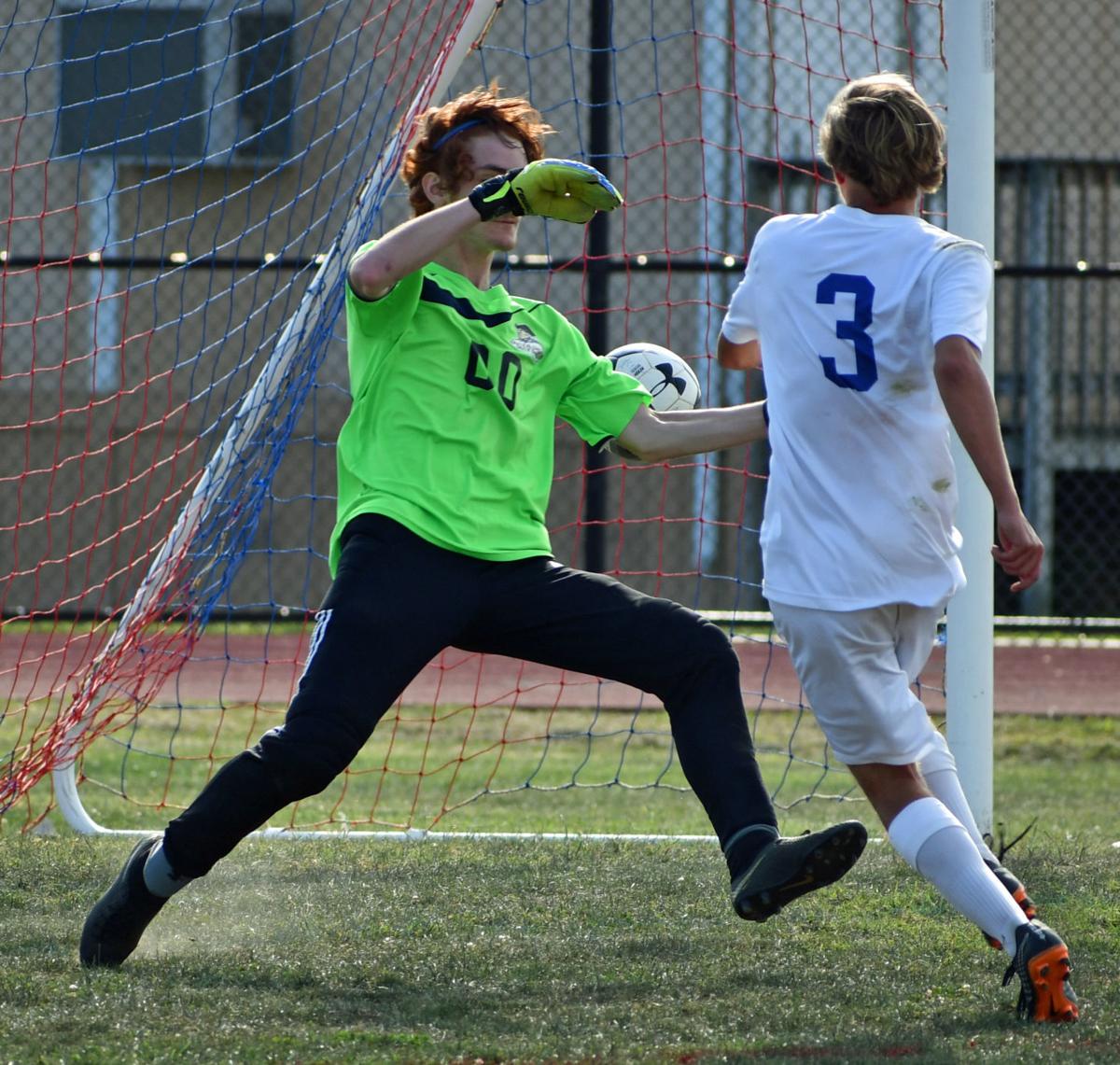 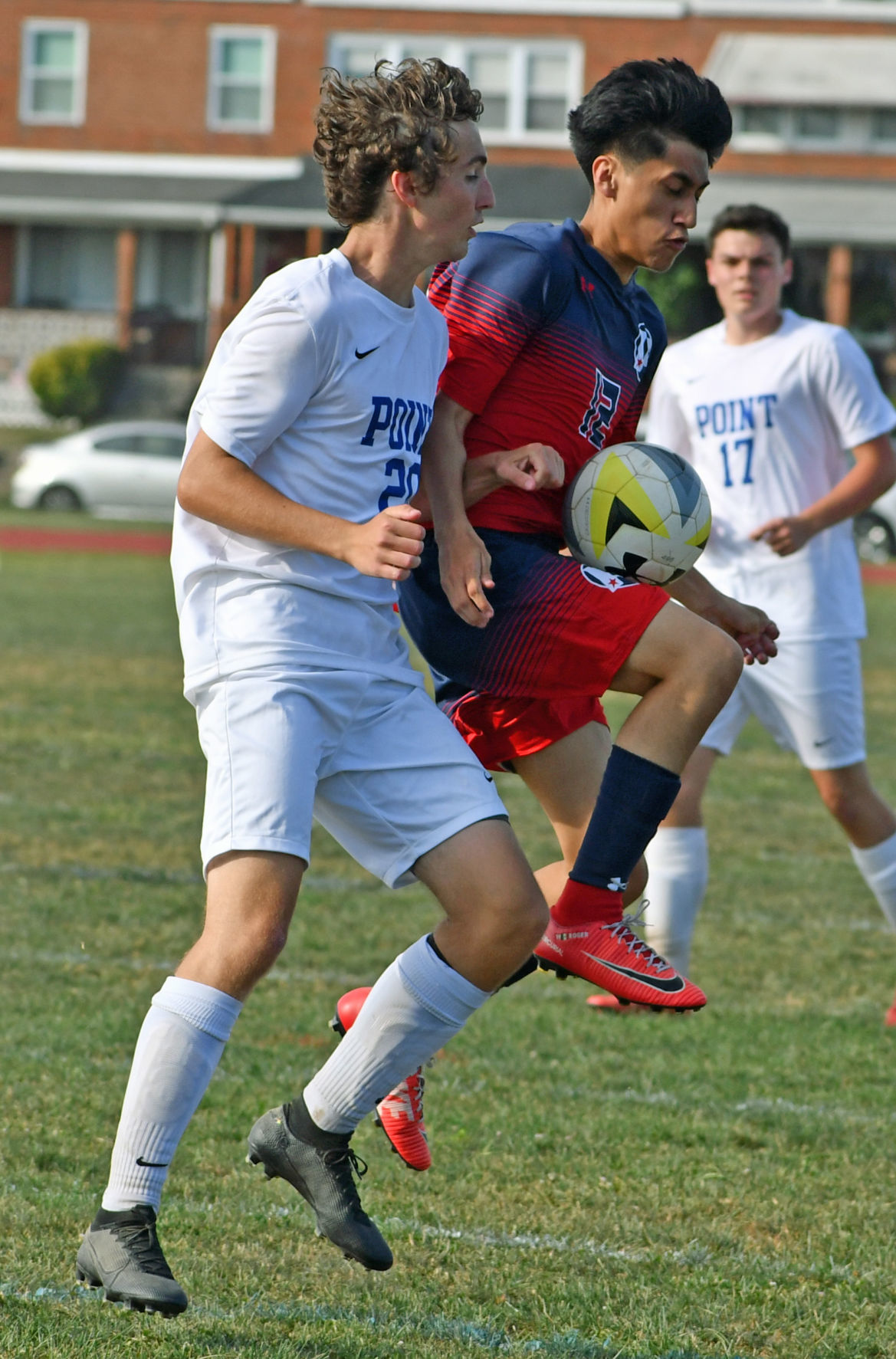 Roger Lopez of Patapsco settles the ball while being defended by Hunter Goldberg of Sparrows Point. 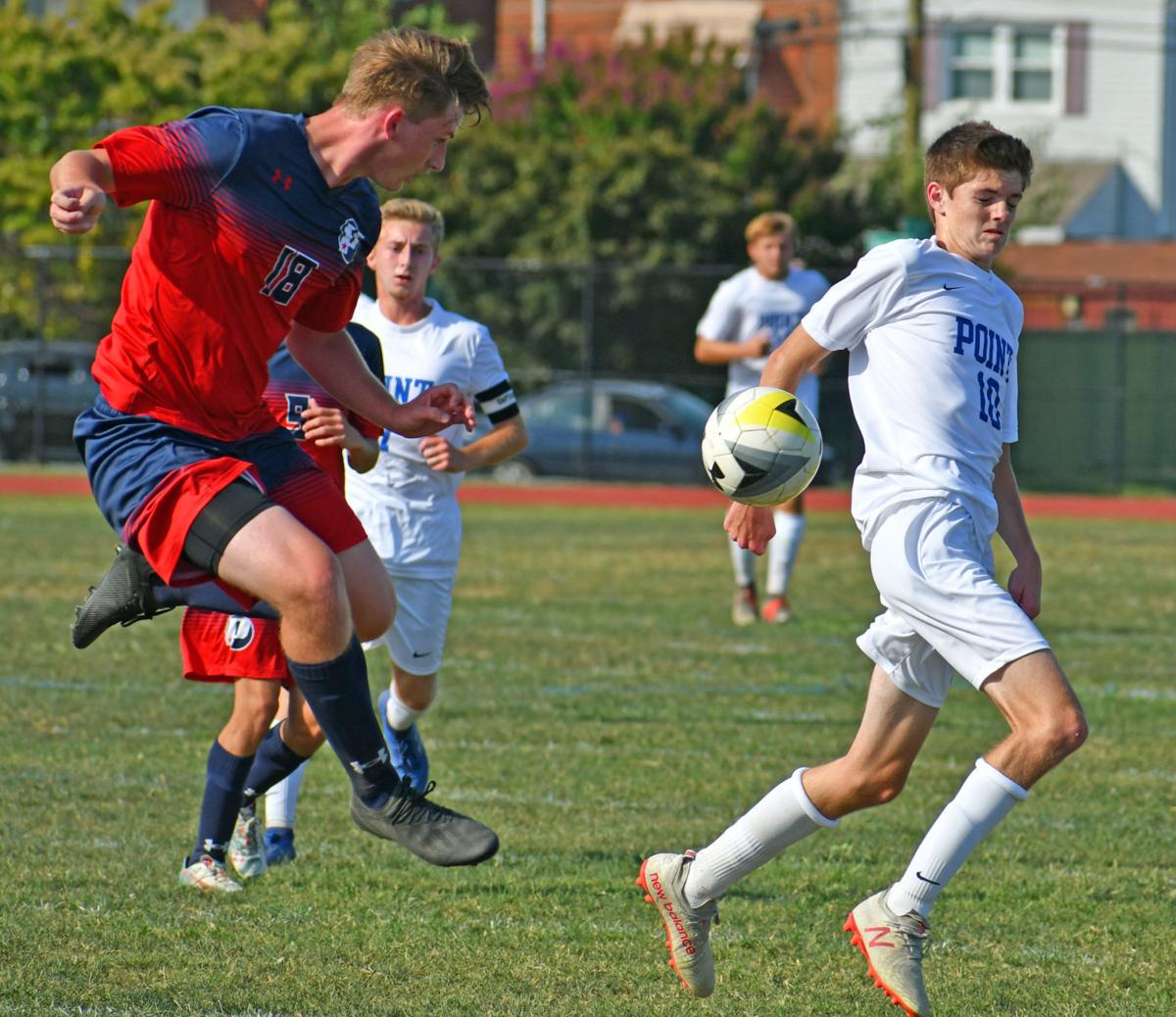 ryan baxter of Patapsco knocks the ball past Zach Lambert of Sparrows Point. Lambert had three goals in the Pointers’ 5-0 win. 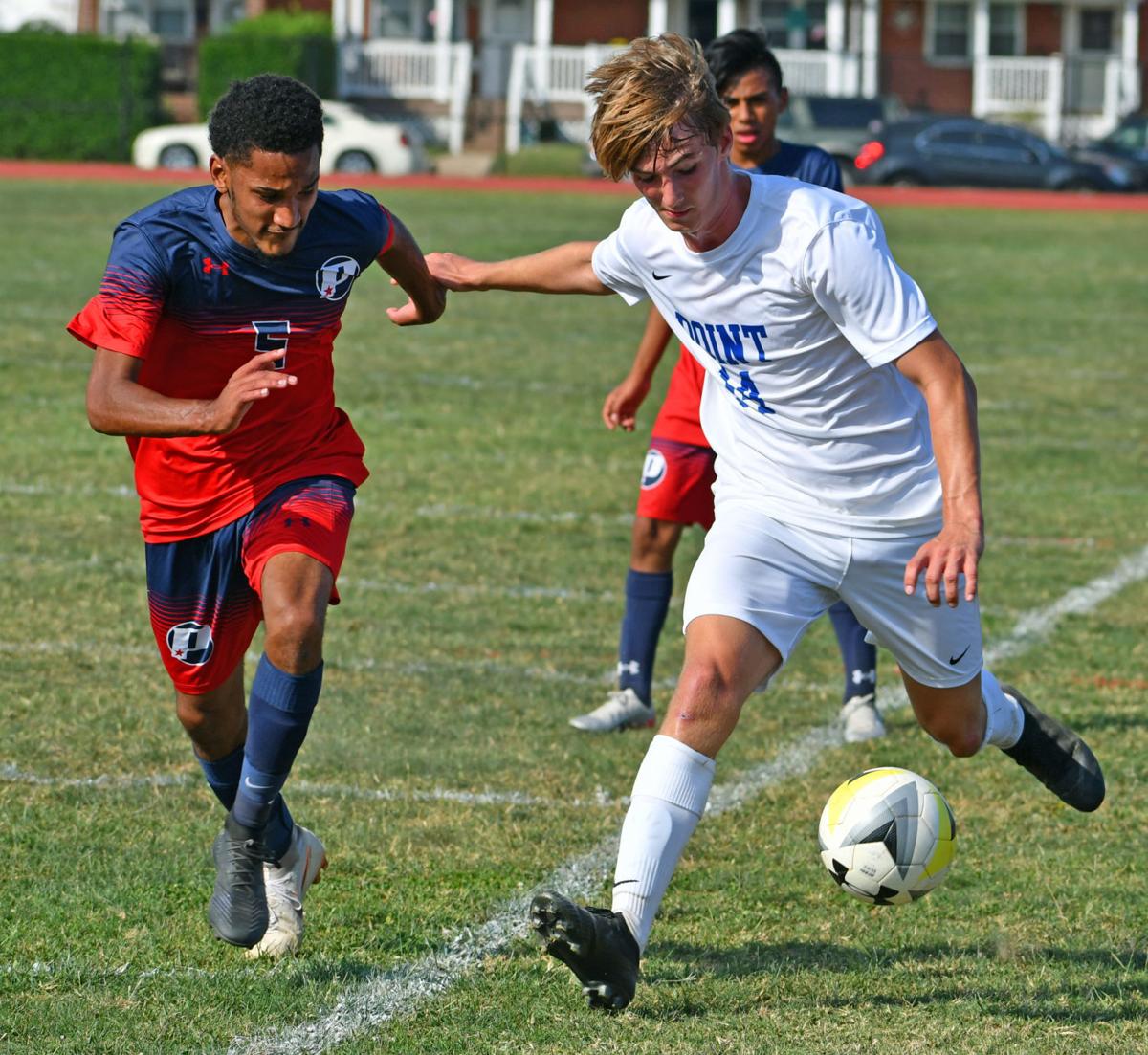 D’Marco Watkins of Patapsco moves in to cut off Sparrows Point’s Gavin Howell.

Steven Fulton of Patapsco and Sparrows Point’s Josh Lynch battle for possession of a loose ball.

Roger Lopez of Patapsco settles the ball while being defended by Hunter Goldberg of Sparrows Point.

ryan baxter of Patapsco knocks the ball past Zach Lambert of Sparrows Point. Lambert had three goals in the Pointers’ 5-0 win.

D’Marco Watkins of Patapsco moves in to cut off Sparrows Point’s Gavin Howell.

The Sparrows Point boys soccer team continued its strong start with a 5-0 victory over rival Patapsco on Sept. 9.

The Pointers struck early, taking a 1-0 lead on a penalty kick by Zach Lambert.

It was the first of three goals Lambert scored in the first half to give Sparrows Point a 3-0 halftime lead.

Brian Billings and Gavin Howell added goals in the second half got the Pointers.

“You never know what to expect when you’re playing a local rival,” Sparrows Point coach Joe Lambert said. “A lot of the guys know each other and nobody wants to lose to their friend.

“I don’t think either team had an edge; guys always get up for games like this.”

The Patriots had a poor turnout this season and were unable to field a junior varsity team.

The day before playing Patapsco, Sparrows Point travelled to Franklin and defeated the host Indians 10-1.

Sparrows Point (4-0) has given up one goal this season.

“We have very solid defenders, and center midfielders like Josh Mustachio and Justin Chmielewski sit in front of them and bust up the other team’s play,” Joe Lambert said.

Sparrows Point had a long break after the Patapsco game and does not play again until it hosts Loch Raven on Friday.

The Raiders stunned the then-defending state champion Pointers in overtime last year in the second round of the regional playoffs.

Sparrows Point, with an entire roster of juniors and seniors, remembers that game.

“I’ve had some of these guys for three years now,” said Joe Lambert, who is in his thrd year coaching the Sparrows Point boys after leading the Pointer girls to three state titles. “We have guys from our state championship team [in 2017] still here.

“They are comfortable with each other and they all understand how we want to play.”

Patapsco was to host Franklin on Sept. 17, play at Baltimore Poly on Thursday and at Winters Mill on Friday.

“We outshot them by a lot, but just couldn’t score,” Patapsco coach Larry Fulton said.

Dundalk (0-2) was to host Pikesville on Tuesday and Chesapeake on Thursday.