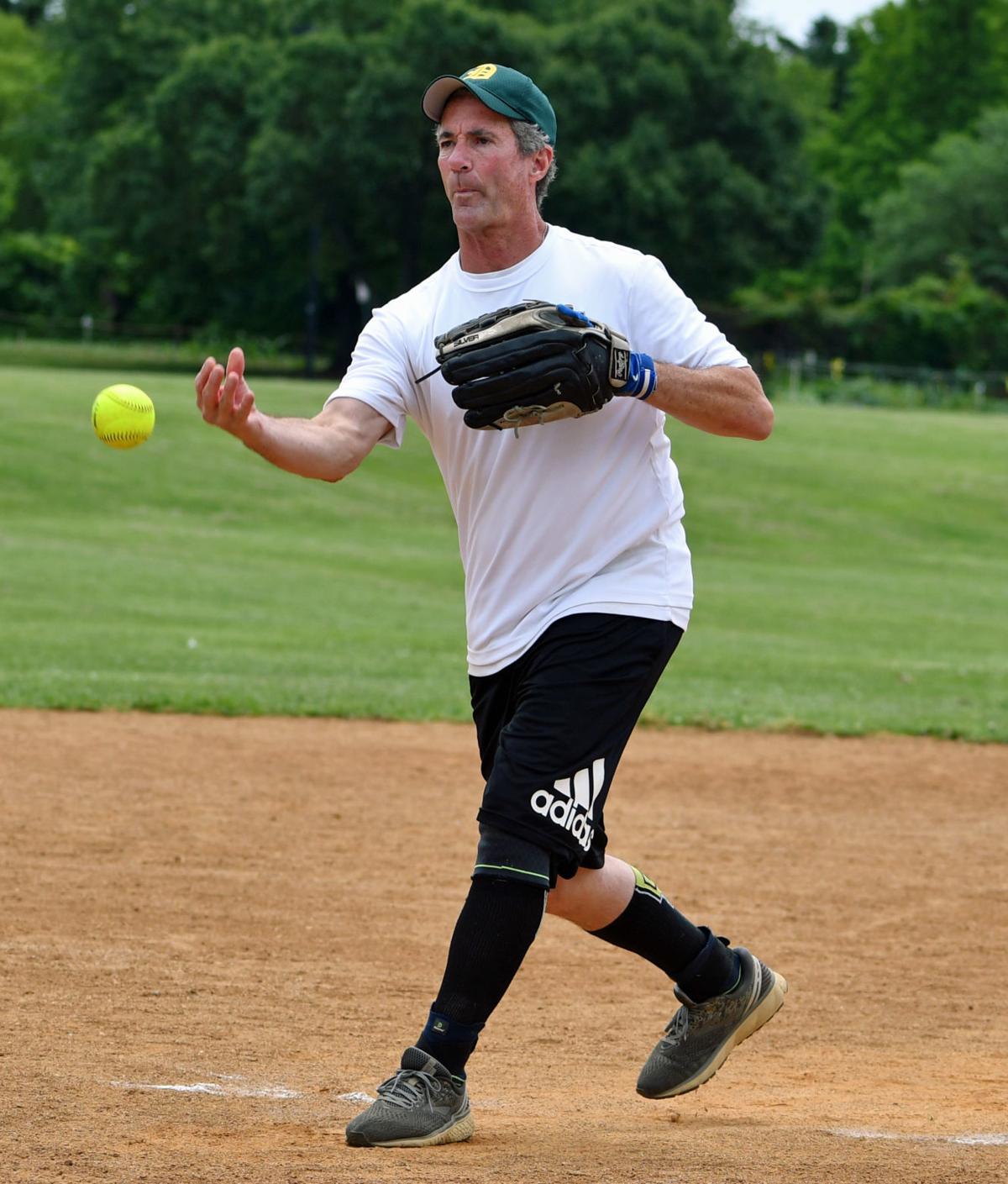 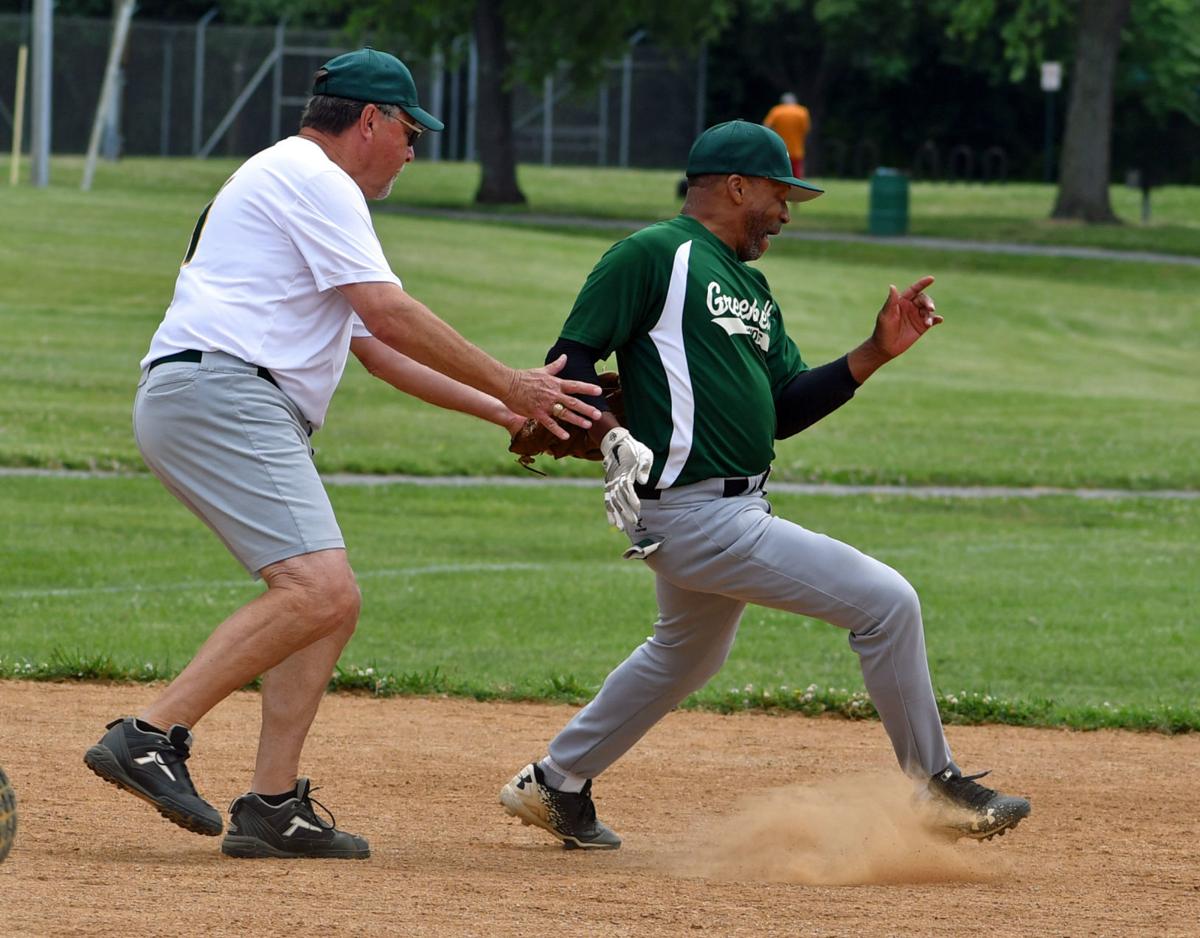 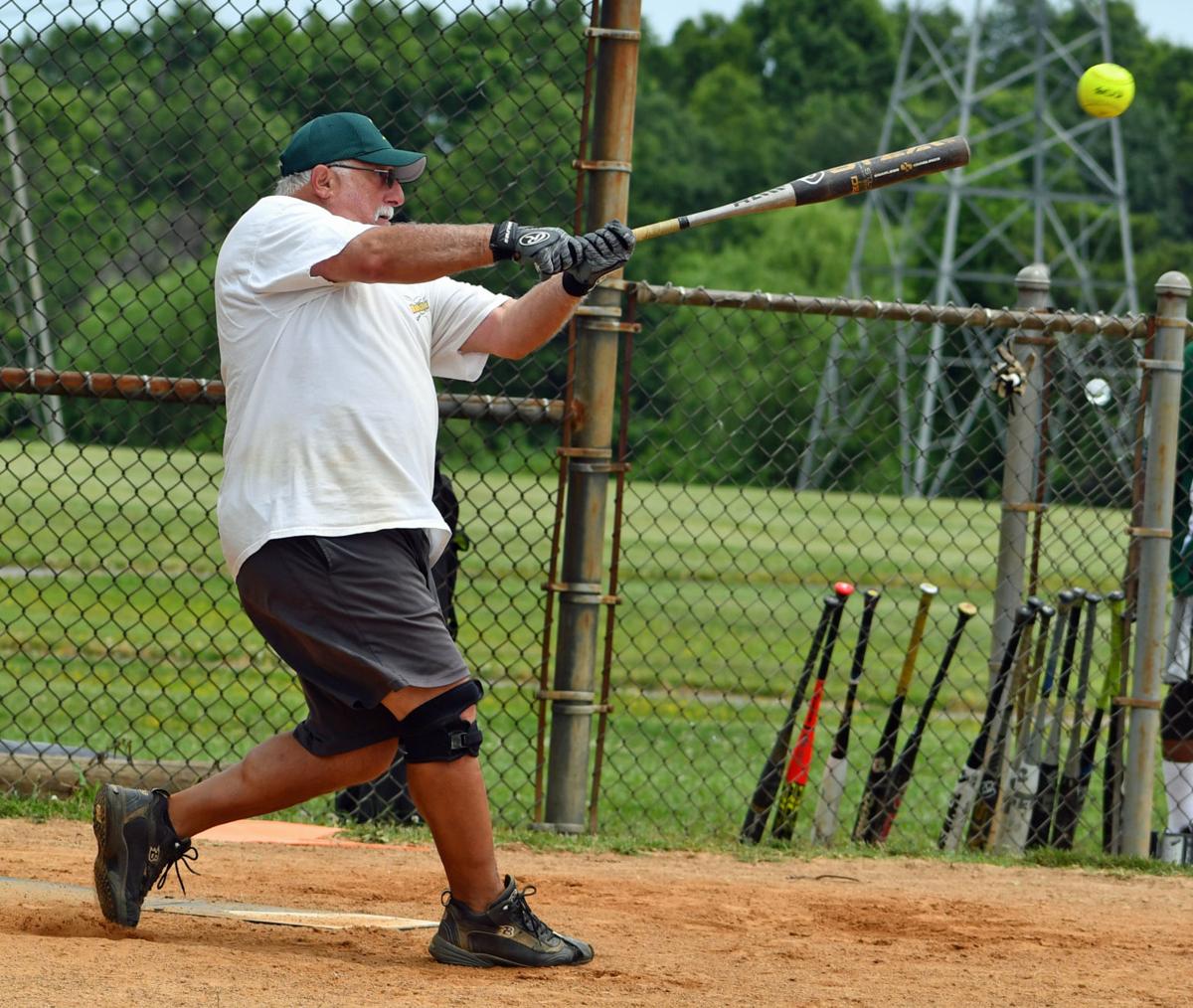 Jimmy Antonakis drives the pitch for a base hit against Greenbelt. 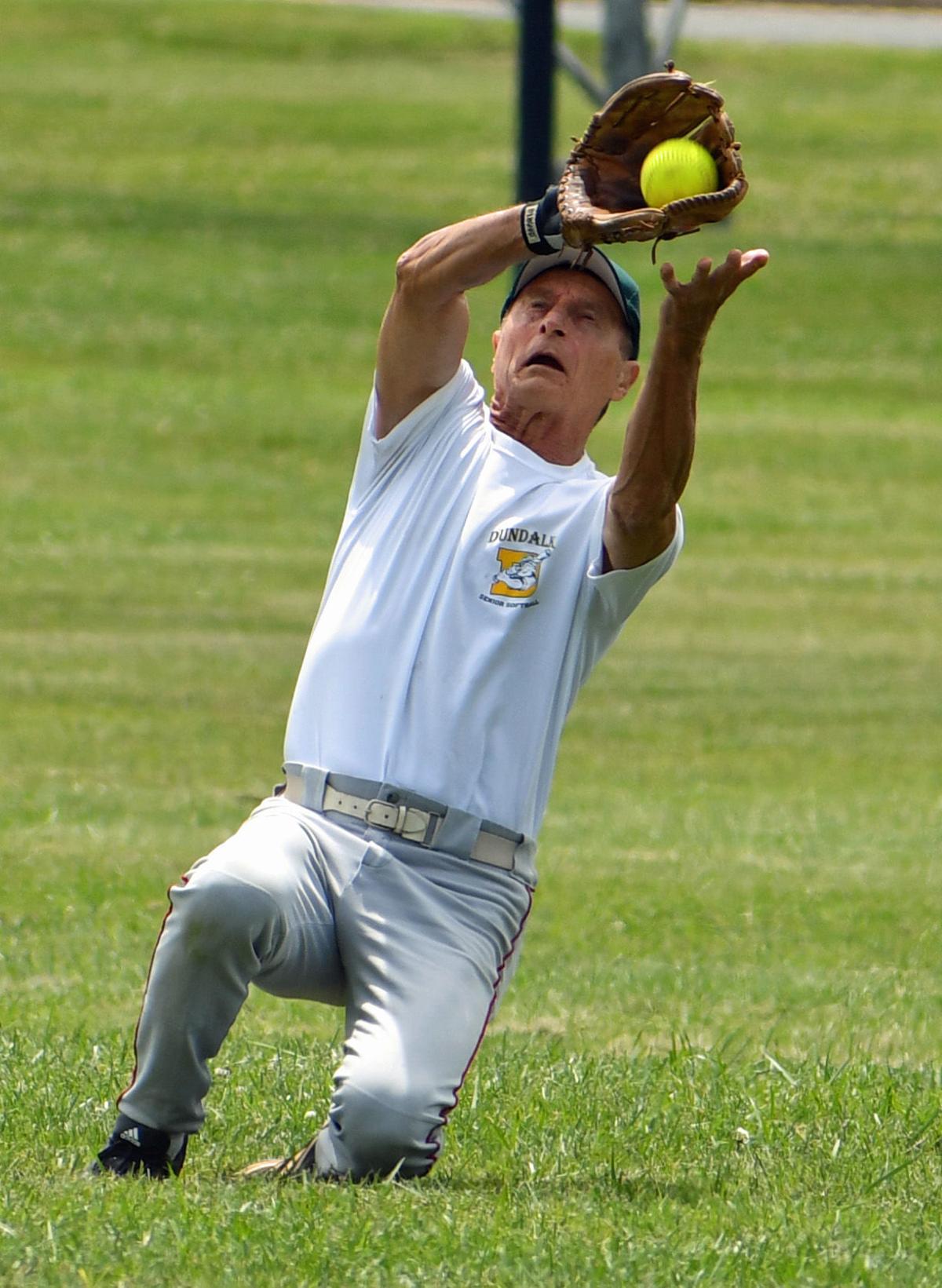 Phil Biedronski snags a fly ball during the sweep of Greenbelt. 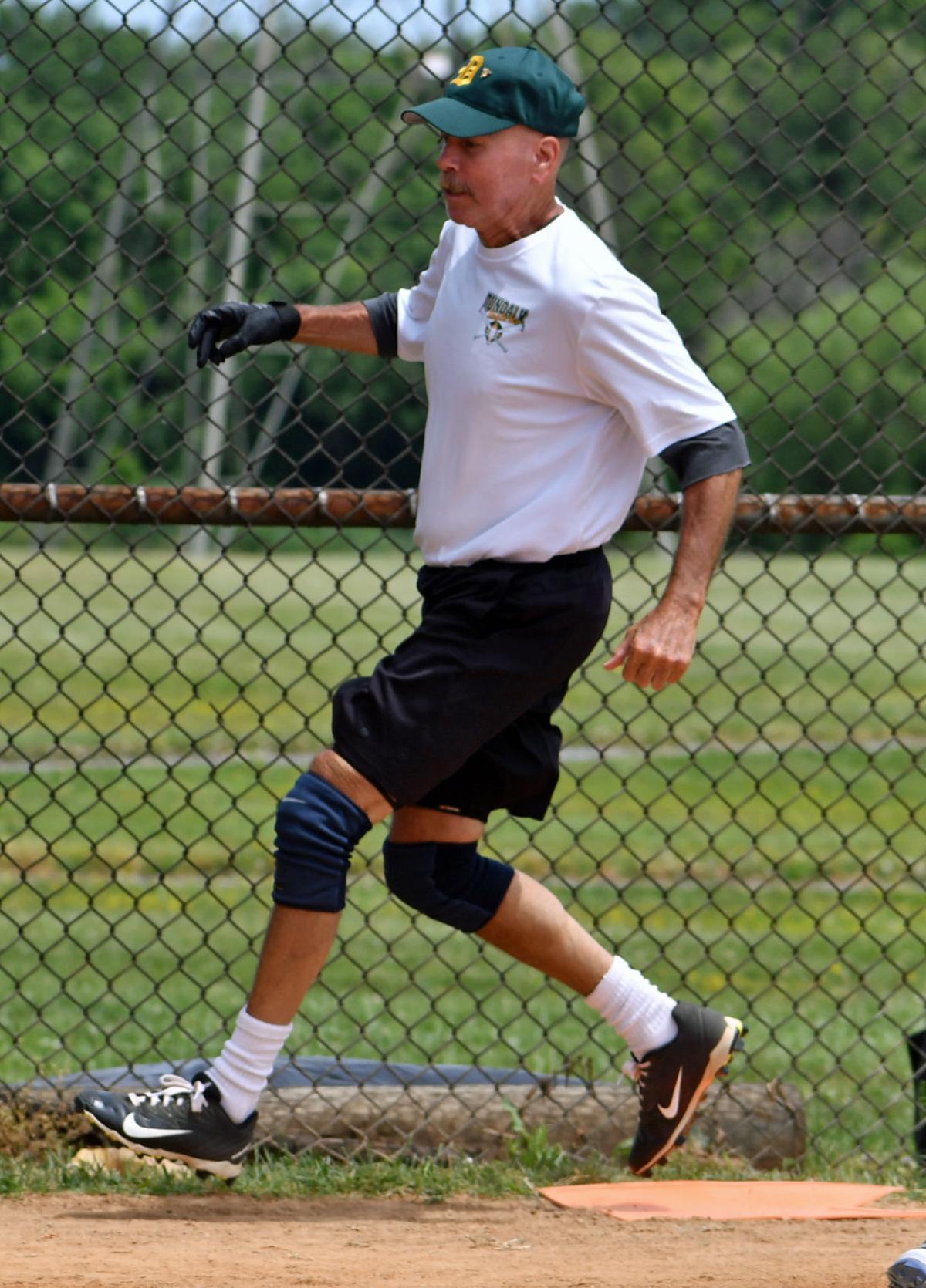 Bobby Carpenter crosses the plate with the winning run as Dundalk rallies to beat Greenbelt with three runs in the bottom of the seventh.

Jimmy Antonakis drives the pitch for a base hit against Greenbelt.

Phil Biedronski snags a fly ball during the sweep of Greenbelt.

Bobby Carpenter crosses the plate with the winning run as Dundalk rallies to beat Greenbelt with three runs in the bottom of the seventh.

DUNDALK — A bizarre game-winning rally in the bottom of the seventh inning against visiting Greenbelt last week gave the Dundalk Senior Softball team an outcome it dearly needed: a doubleheader sweep.

It had been over a month since Dundalk swept an opponent (May 8 against the Howard Shockers). Since then, Dundalk had been swept twice and split four doubleheaders.

(Every meeting between teams in the Baltimore Beltway Senior Softball League is a doubleheader.)

After outslugging Greenbelt 18-12 in te first game on June 12, Dundalk rallied for three runs in the bottom of the seventh to win the second game 10-9.

It was the third sweep this season for Dundalk (10-12). Dundalk has been swept four times; hence being two games under .500.

The team is in fourth place in the A Division, nine games behind the Howard Reds (19-3). The Old Liners (13-7) are in second place, followed by the Howard Shockers (12-8.

Dundalk trailed 9-7 in the bottom of the seventh with two outs and Terry Cook on second with a one-out double.

Drew Martin kept Dundalk alive by drawing a walk. Bobby Carpenter singled to drive in a run and move Martin to third place.

Jimmy Antonakos hit a ground ball to second. The tying run scored when the ball got through the infield, and Carpenter scored the winning run after a throwing error.

Dundalk has struggled this season because “our defense isn’t what it used to be,” Wamsley said. “We’ve been giving teams our, five and six outs an inning.”

Dundalk still has the same core of players who went unbeaten four years ago. But those players are now four years older in an over-60 league.

Trailing 4-3 entering the bottom of the second, Dundalk scored three runs to take a 6-4 lead.

Albie Cole put Dundalk ahead with a two-run double and scored on Dan Bandy’s single.

But with the bases loaded and one out, Dundalk was unable to expand upon its lead after two groundouts.

James Barnes drove in a run in the bottom of the third to make it 7-4.

Dundalk scored in every inning of the first game, highlighted by a five-run fourth and a five-run sixth.

(Five runs is the maximum number a team can score in every inning prior to the seventh.)

Dundalk trailed 8-7 entering the bottom of the fourth when the five-run outburst gave it the lead for good.

Home games are at Stansbury Park. Games are played on Mondays and Wednesdays and begin at 10 a.m.