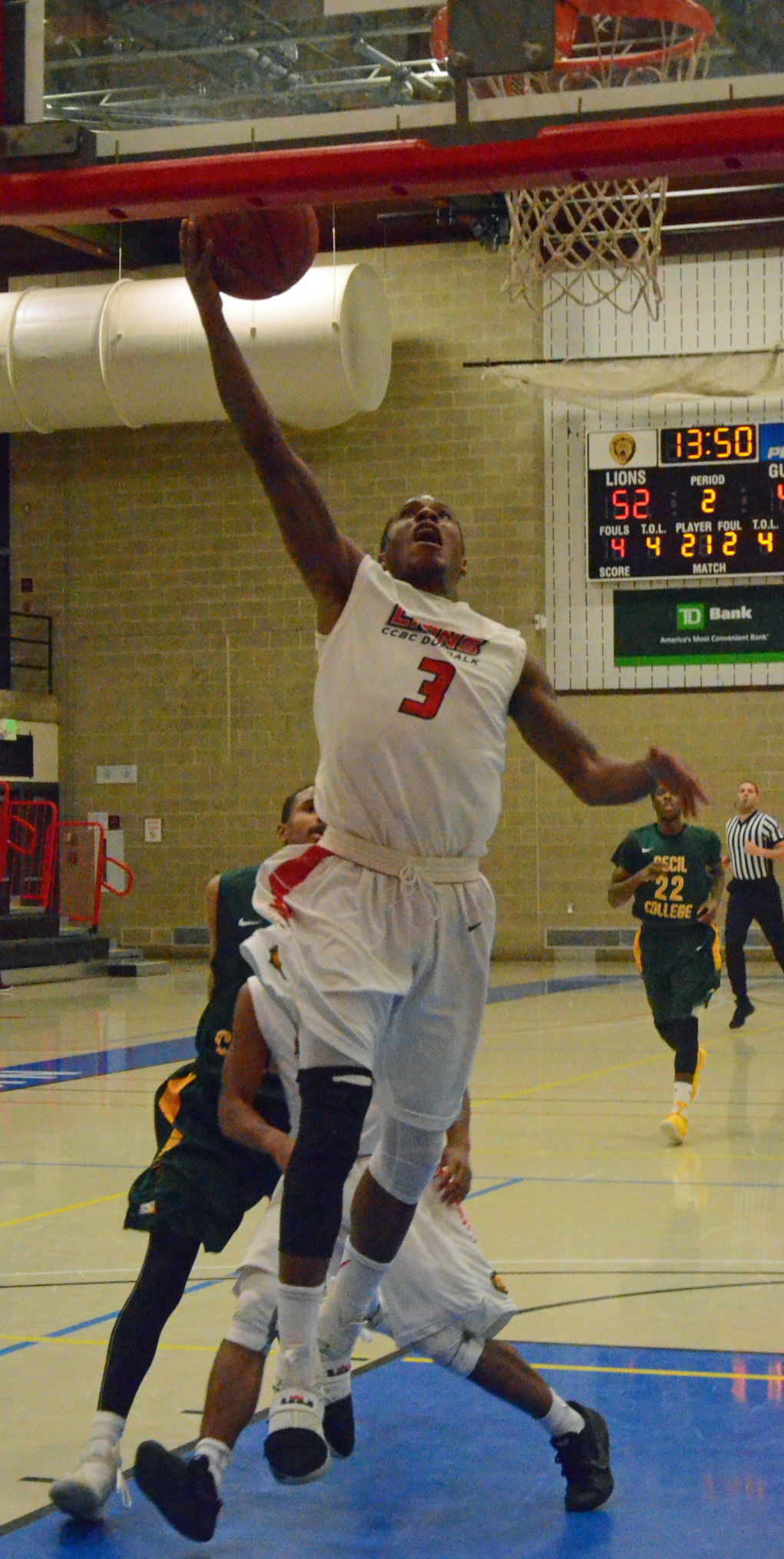 Brandon Johnson of CCBC Dundalk finishes off a fast break against Cecil College. 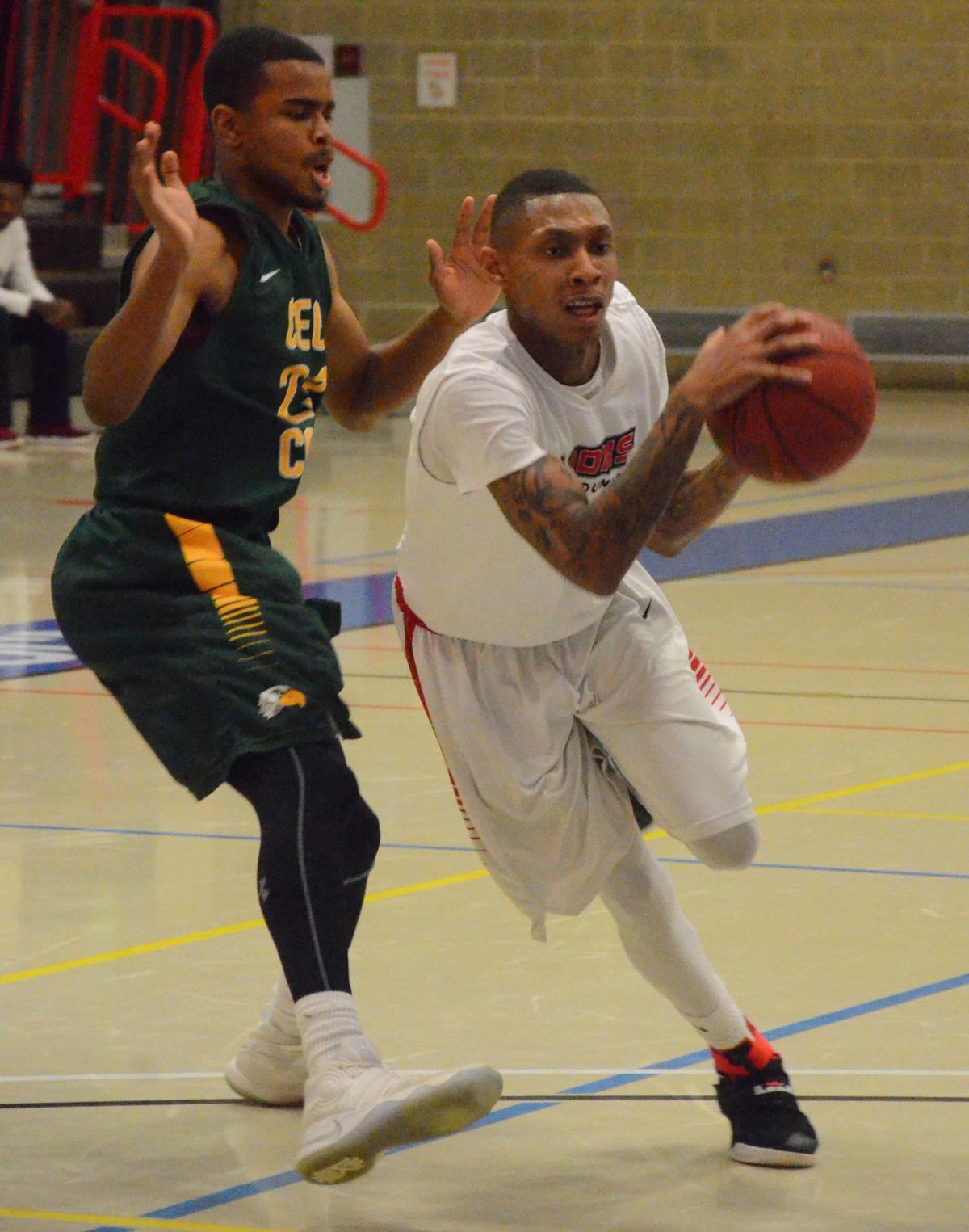 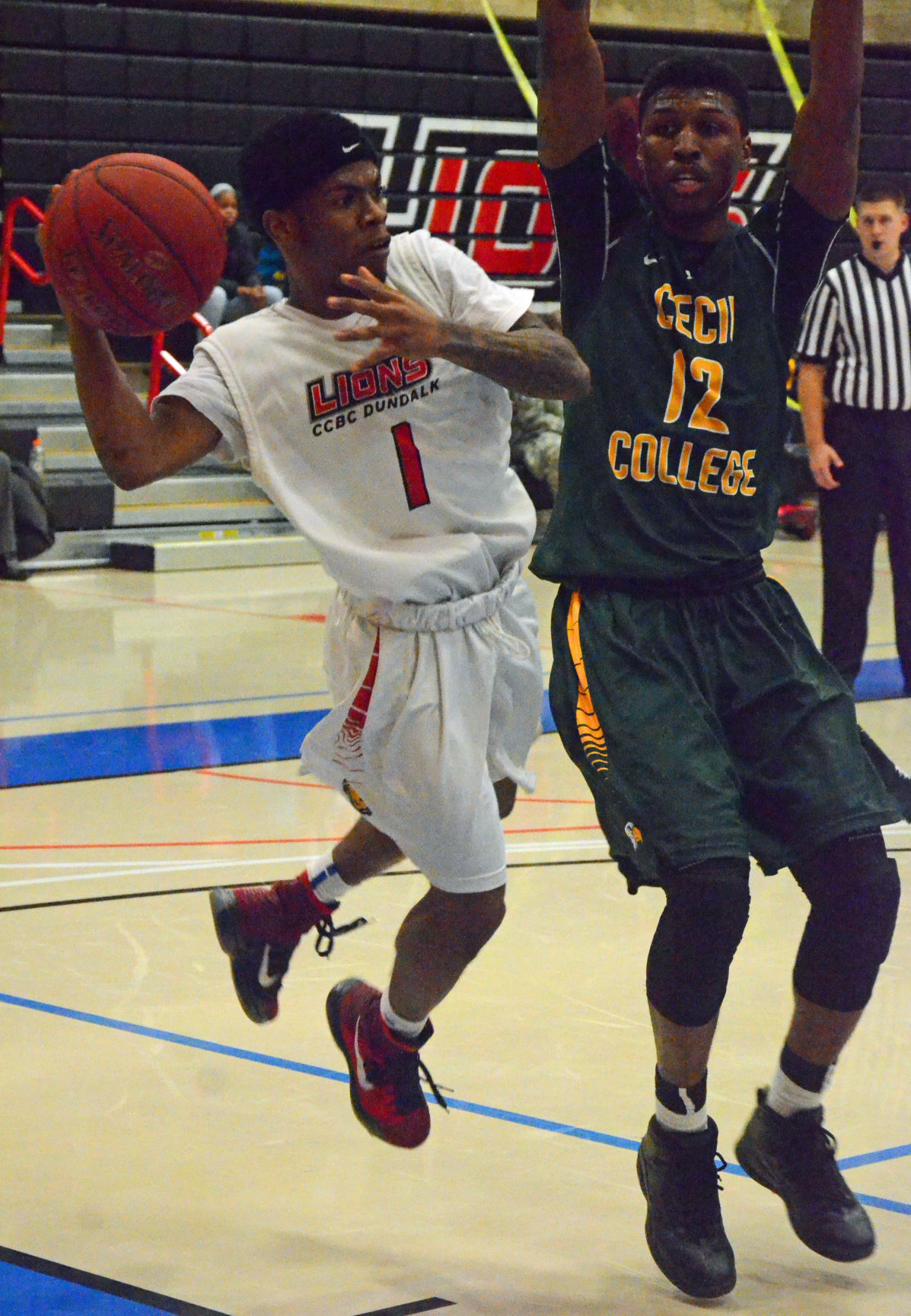 Mike White of CCBC Dundalk passes to a teammate while driving the baseline. 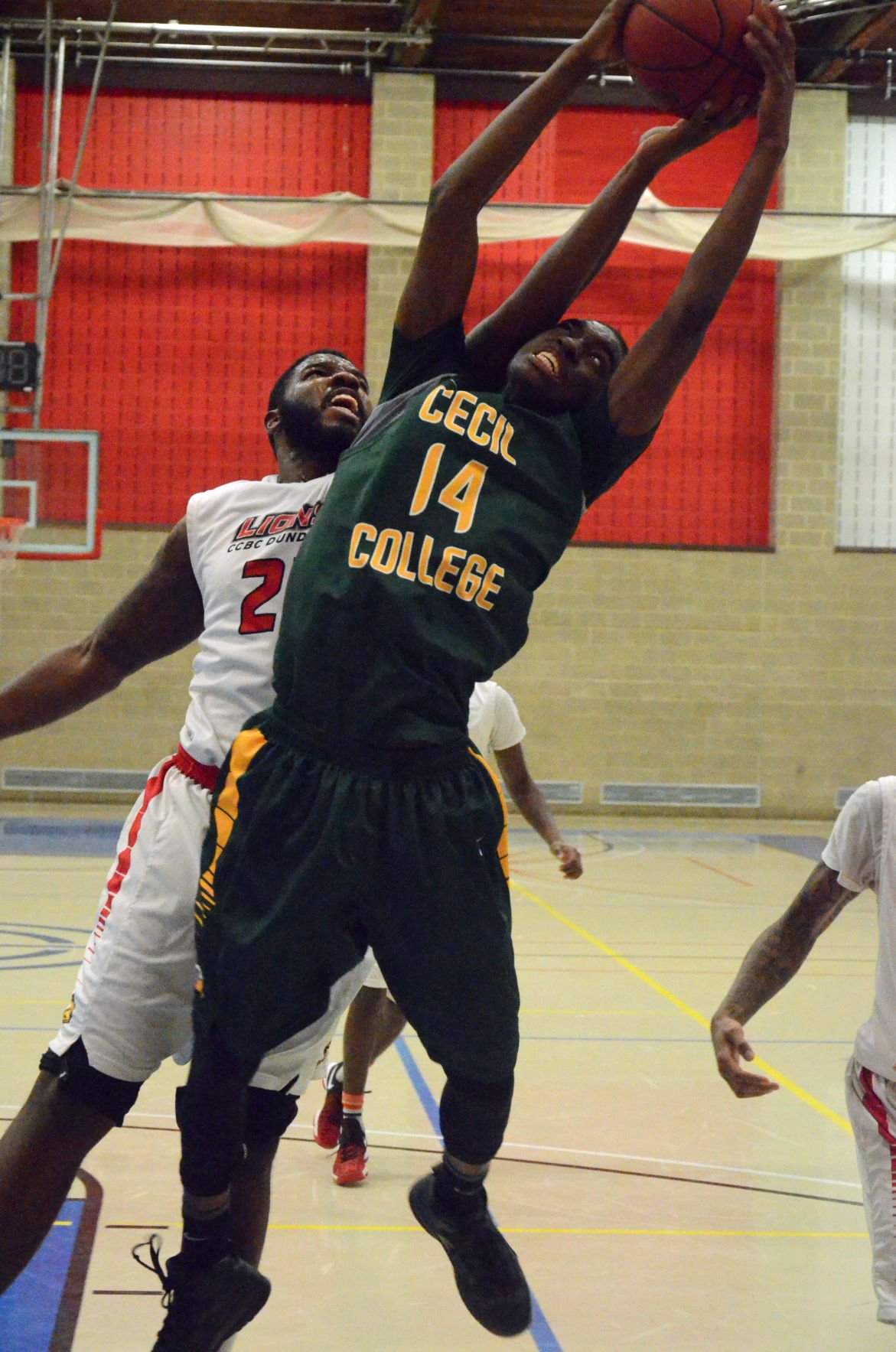 Rodney Christian of CCBC Dundalk fights for a rebound. 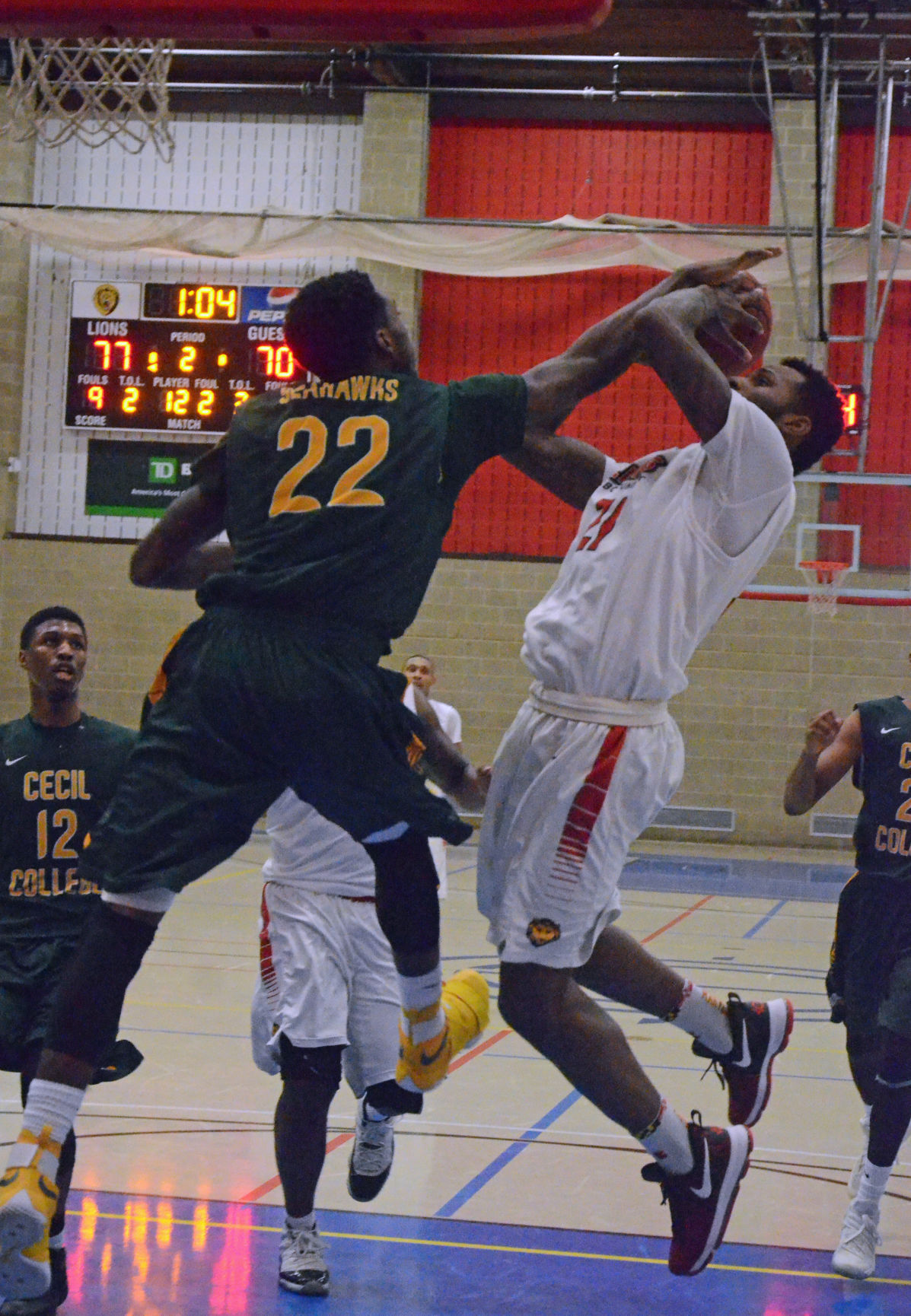 Brandon Johnson of CCBC Dundalk finishes off a fast break against Cecil College.

Mike White of CCBC Dundalk passes to a teammate while driving the baseline.

Rodney Christian of CCBC Dundalk fights for a rebound.

It’s been a season of roster turmoil thus far for the CCBC Dundalk men’s basketball team, and the Lions seem to be thriving on it.

The Lions defeated Cecil 82-77 with only eight players dressing for the game, and held off Montgomery 73-70 with only nine players available.

“This has been the craziest season, in terms of numbers, in four years,” Dundalk coach Jaron Taylor said. “We started the season with 14, and we’re down to eight.

“Only four guys have played all 15 games. We’ve had no continuity. We’ve played some strong programs, and when you have no continuity, it’s tough.”

Dundalk started the season 4-0, then lost four of five before the current stretch of five wins in six games.

And only three of their first 14 games were at home. The Lions now finish the season with five home games in their last seven.

“Our best all-around player has only played in four games,” Taylor said. “But now we’re at the point where I know who we have for the rest of the season.”

The Lions led Cecil College 36-30 at halftime and weathered several Seahawk runs during the second half.

The Seahawks, helped by three steals, scored on five of their next six possessions to get to within 79-77 with 15 seconds remaining in the game.

Dundalk was able to inbounds the ball, and the Seahawks were forced to foul Brian Jefferson. He made both free throws with 11 seconds left in the game.

Cecil then turned the ball over on an errant pass, and Epenetus Heriques made one of two foul shots to clinch the win.

Dundalk managed to win despite being outrebounded 45-34. Both teams made 29 field goals, but the Lions had two more three-pointers (eight to six) and were 16-for-21 from the foul line while the Seahawks were 13-for-19.

Against Montgomery on Saturday, Mike White had 22 points and Heriques had 13 points. Rodney Christian and Robert Goodwin each had 10.

The Lions shot 46 percent from the floor, making 24 of 52, and sank 10 of 27 three-point attempts while Montgomery 23-for-54 from the floor but attempted only six three-pointers, making one.

“We have our nine players now,” Taylor said. “Everybody plays. Everyone knows to be smart, be careful and no bad fouls.

“We’re moving in the right direction. We got handled pretty well at garrett College [losing 93-57], but other than that we feel the conference and regional titles are up for grabs. It will come down to who comes to play, who brings their best game.”

Dundalk has a 6-2 record in the Maryland JuCo League. Harford County (7-1) and garrett (6-1) lead the conference, while baltimore City is 4-1and CCBC Catonsville is 7-2.

The Lions were to play at Harford County on Wednesday, and then have three straight home games: Prince Georges on Saturday, Allegany on January 25 and Baltimore City on January 28.

The Maryland JuCo tournament is scheduled to run from February 17-19, while the Region XX Tournament begins on March 7.