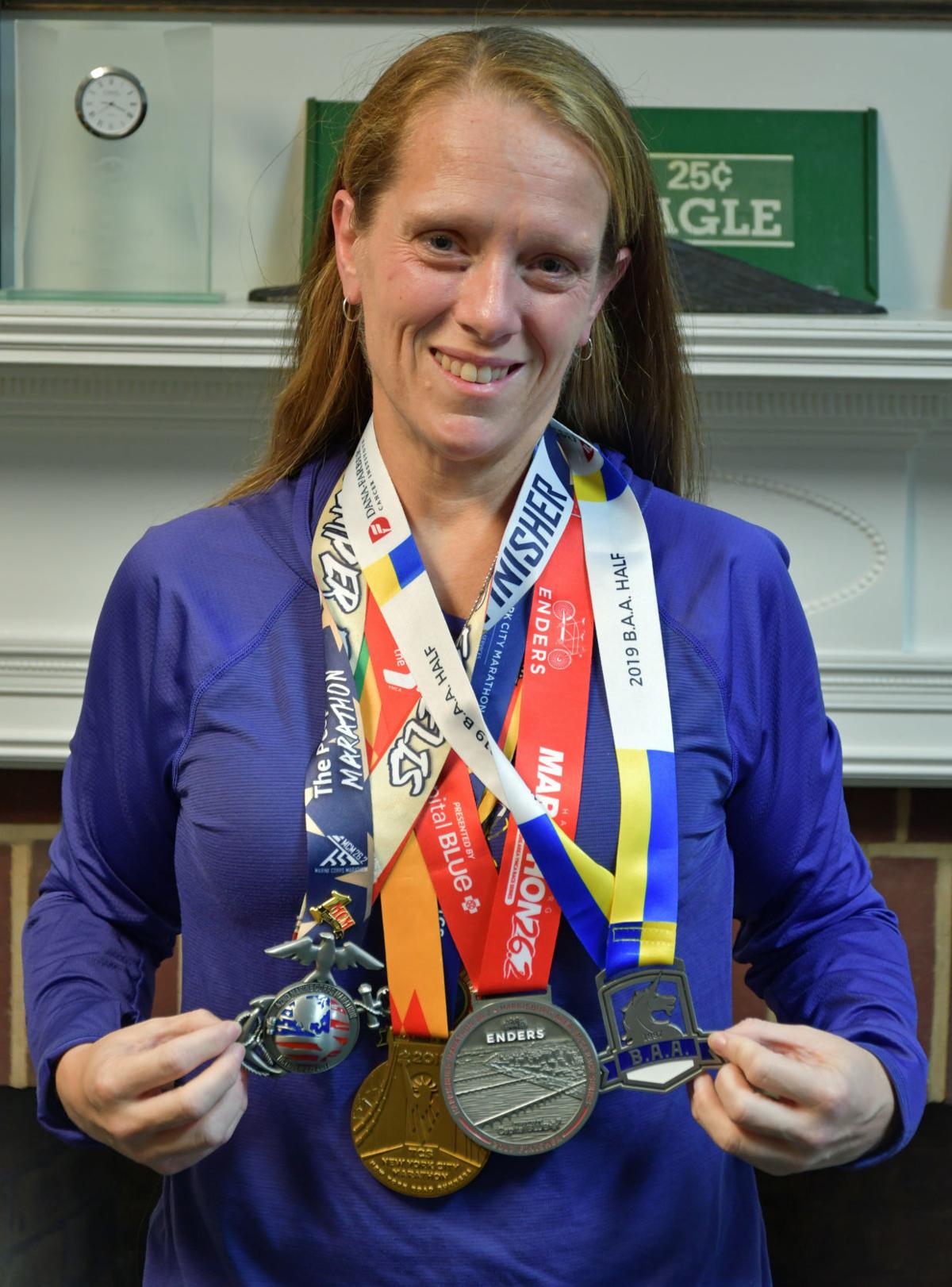 Kim Morrison displays the medals she has earned from running half-marathons and marathons. 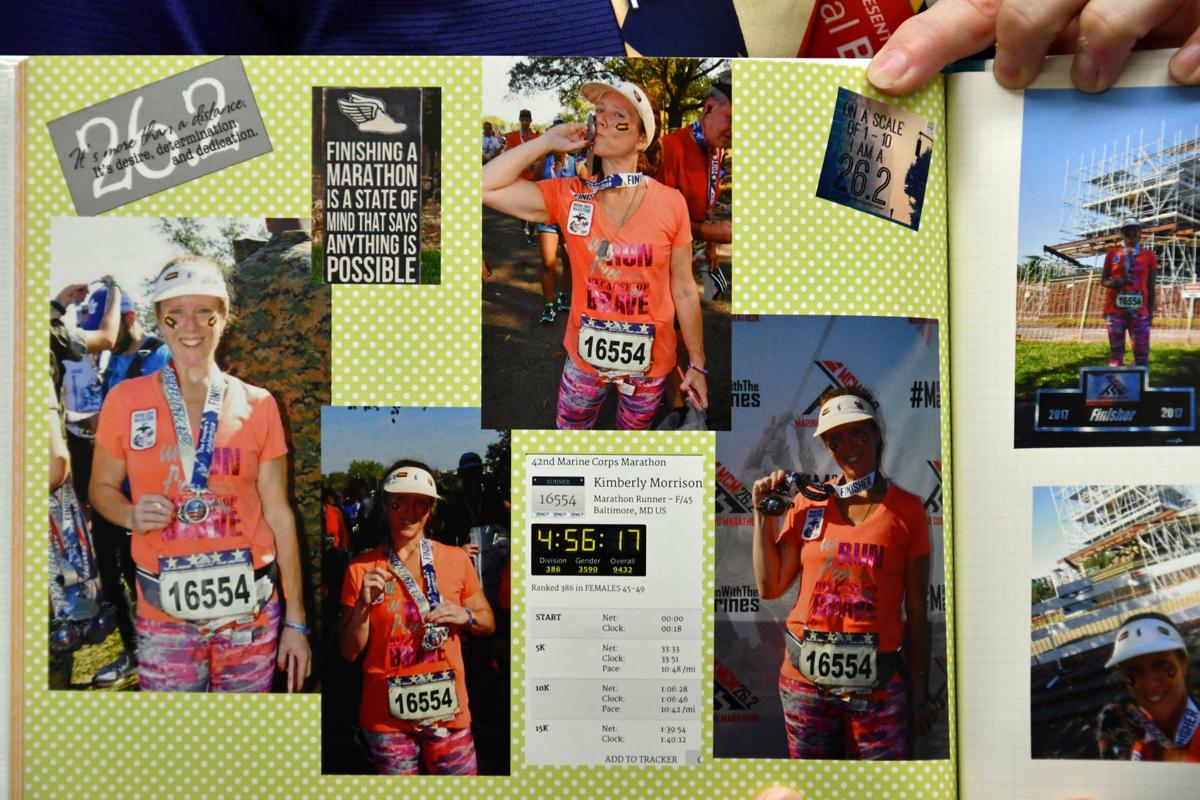 A page from one of the photo books Kim Morrison creates for every half-marathon and marathon she has entered. 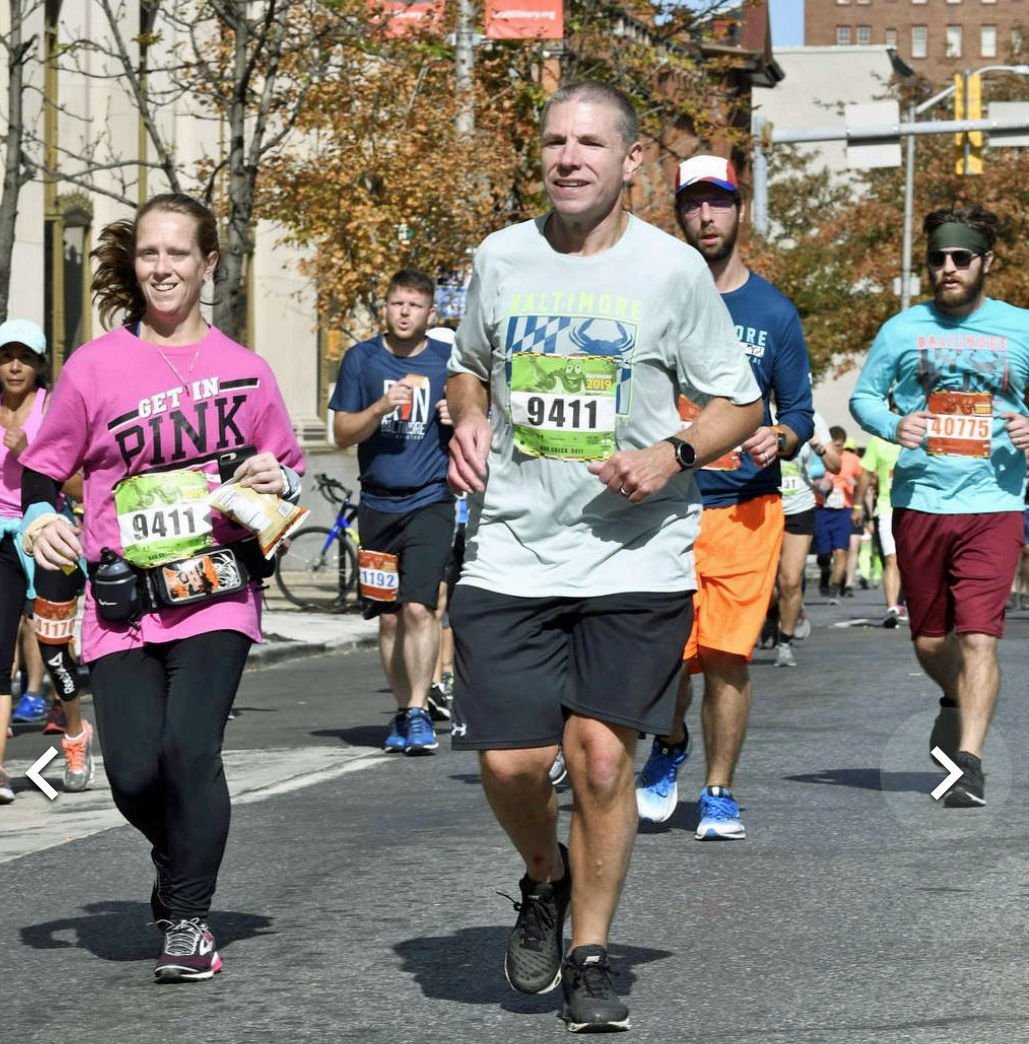 Kim Morrison runs the Baltimore half-Marathon with her brother-in-law, Kirk Marzec. Morrison is wearing a pink shirt to honor her sister, a breast cancer survivor.

Kim Morrison displays the medals she has earned from running half-marathons and marathons.

A page from one of the photo books Kim Morrison creates for every half-marathon and marathon she has entered.

Kim Morrison runs the Baltimore half-Marathon with her brother-in-law, Kirk Marzec. Morrison is wearing a pink shirt to honor her sister, a breast cancer survivor.

Not just anyone can enter the Boston Marathon.

Even posting a qualifying time sometimes isn’t enough. For the 2018 marathon, the Boston Athletic Association (BAA) had to turn away 7,384 of 30, 348 qualifiers because of limitations on the size of the field.

That made it difficult for Kim Morrison, 47, a former Charlesmont resident who wanted to enter the Boston Marathon. Her marathon time is 4:35.

“The Boston Marathon has always been my running dream,” Morrison said. “I tried to qualify last but didn’t make the time. Then they [lowered] the time again.”

But she still found a way.

Morrison has only been distance running since 2012. Before then, Morrison said, she “was not an athlete.” She took up road racing after undergoing a gastric bypass operation to help her lose weight.

Her way to the starting line of the Boston Marathon came from helping others like she helped herself.

“I decided to join a charity team,” she said. “You raise money to support the charity, and they give you a race bib for the marathon.

“Now I’m running the marathon to help others, not just running it just to run it.”

The charity Morrison will be supporting is one supervised through the BAA that promotes a healthy lifestyle, mainly through running.

Morrison, who once weighed 240 pounds and is 5-foot-2, the gastric bypass surgery required she adopt a healthy lifestyle, which she is achieving through running.

“Once you have the surgery done, experience the weight loss, start a regular exercise routine, you never want to go back,” Kim said. “You really watch everything you do and eat.”

Morrison was inspired by her brother-in-law, Kirk Marzec, who also had a gastric bypass and took up distance running.

She had initially been against the surgery, but “when I saw Kirk go through it, I thought maybe it will work. It was a total lifestyle change.”

Morrison attended Patapsco High (where she never ran track or cross country) before moving to Middle River and graduating from Kenwood (where she also never did any sports) in 1990. She attended the then-Dundalk Community Colege.

She presently works for Medstar.

After she decided to take up running, Morrison started working out on a treadmill before entering a 5k race in 2013. Then Marzec talked her into entering the Baltimore half-Marathon in 2014.

“I hemmed and hawed, decided to do it, loved it,” she said. “I haven’t turned back since. Once you cross that finish line, get that first medal, you never want to stop.”

Now she looks for half-marathons to enter, having run races in Hershey, St. Michael’s, Frederick and Annapolis.

Morrison stepped up to marathons in 2017, starting with the Marine Corps Marathon in D.C. She ran the race wearing her father’s dog tags.

“I kept thinking I would never [run a marathon] again,” Kim said. “Then, just a few weeks later I ran the Harrisburg Marathon.”

(She still runs the occasional 5k race, as part of the Medstar running team.)

Kim ran the New York Marathon in 2018. Considered the largest marathon in the world, with a 52,812 finishers in 2018, it is the hardest marathon in which to earn a spot at the starting line.

One way to get in the race is to enter a drawing. Kim entered, and her name was among those drawn.

(Kim also must pay her entry fee and travel arrangements to Boston.

To raise the money, Morrison opened a GoFundMe page through the BAA and is accepting donations through PayPal and Venmo. She’ll be holding fund-raisers at Pizza John’s on Back River Neck Road in January, and at the Texas Roadhouse.

Kim will be part of a ceramic painting event in Essex, where people pay an entry fee (which will go to Kim’s fund-raising) in order to paint (and keep) ceramics.

“I also have a huge change jar, and my family is helping out,” Morrison said. “It’s a team effort.”

The Boston Marathon, as most people know, was the victim of a terrorist bombing attack in 2013 that killed three people and injured hundreds, with 16 people losing limbs.

Kim competed in the Boston Half-Marathon on Oct. 13.

“I visited the memorial [to the victims of the bombing,” she said. “I put my hand on the finish line and made a wish. Three weeks later, the BAA contacted me and told me I had been accepted for the charity team.

“The symbol for the Boston Marathon is a unicorn. I’ve been calling myself a ‘half-a-corn.’ Now I can be a full unicorn.”