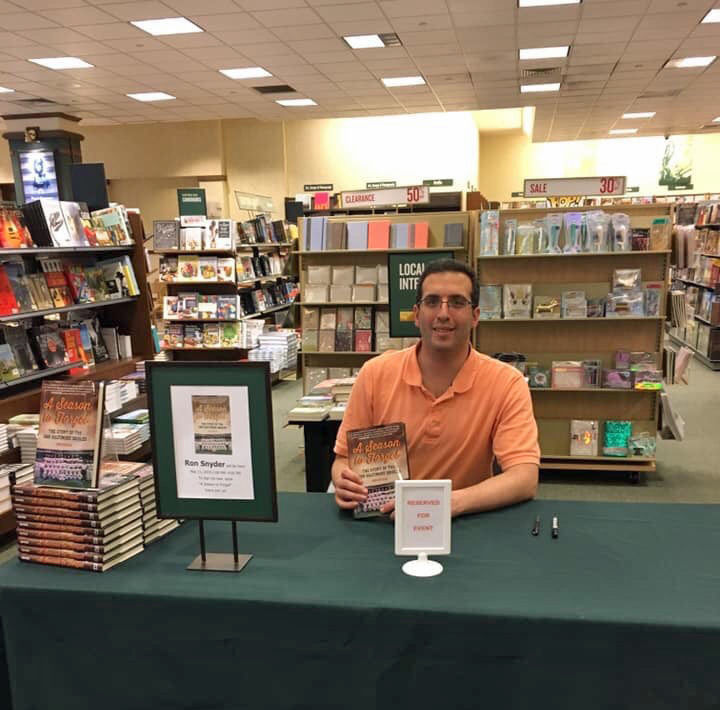 Middle River resident Ron Snyder prepares for a book signing for his book about the 1988 Baltimore Orioles. 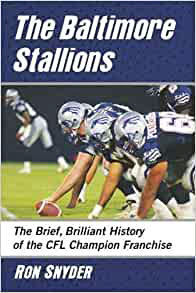 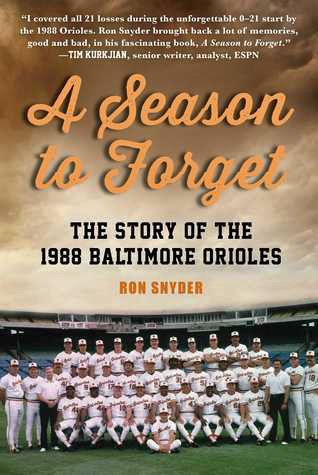 Local writer Ron Snyder has published two books during the past year: one about a season most Baltimore sports fans would like to forget; the other about a team and season few remember.

“A Season to forget: The Story of the 1988 Baltimore Orioles” hit bookshelves last year. It examines the season the Orioles started 0-21 en route to finishing with a record of 54-107, the worst record in franchise history (not counting the St. Louis Browns era) until the past two seasons.

Being released this month is “The Baltimore Stallions: the brief, brilliant history of the CFL champion franchise.”

The Stallions were a Canadian Football League expansion team that played in Baltimore for the 1994-95 seasons. The team made the Grey Cup in both seasons, becoming the first (and thus far only) United States-based team to win the Grey Cup in the 1995 season.

The team came to Baltimore soon after the city had been snubbed by the NFL when it added two teams. Despite having made what many believed was the best presentation for an expansion team, the NFL put teams in Charlotte (the Carolina Panthers) and … the Jacksonville Jaguars.

Baltimore fans were enthusiastic about the team, with the Stallions leading the league in attendance in 1994 (over 37,000 per game) and finishing second in the league in 1995 (over 30,000 a game).

Yet, after winning the league title, “the players left the Grey Cup knowing their future was likely not going to be in Baltimore,” Snyder said. The Cleveland Browns had announced they were moving their franchise to Baltimore, “and almost all agreed at the time there just wasn’t enough fan interest and sponsorships available to support two professional football teams.

The Stallions finished 12-6 in the regular season in 1994, which remains a record for a CFL expansion team. They defeated the Toronto Argonauts 34-15 and the Winnipeg Blue Bombers 14-12 to reach the Grey Cup.

The Stallions started the 1995 season 2-3, then finished on a 16-game winning streak.

After a 15-3 record in the regular season, Baltimore beat Winnipeg 36-21 and the San Antonio Texans 21-11 to earn a spot in the Grey Cup against the Calgary Stampeders.

Calgary, which also had a 15-3 regular-season record, was quarterbacked by Doug Flutie. But it was Baltimore quarterback Tracy Ham who was named the game’s MVP after leading Baltimore to a 37-20 win.

A title that has become something of a trivia question to younger Baltimore sports fans.

“Those that lived through the loss of the Colts and the failed event to win an expansion franchise look back fondly on the Stallions,” Snyder said. “After Baltimore lost out to Charlotte and Jacksonville, many people in Baltimore were done with the NFL.

“Many were tired of being led along with false hope only to see the NFL go in another direction.”

Snyder was six-years-old when the Colts left town in March 1983 and headed to Indianapolis, and 18 when the Ravens arrived in 1996.

“I basically went my whole childhood without a football team to call my own,” Snyder said. “The Stallions were that first team to me. It wasn’t the NFL, but it was football and the team was fun to watch.

“I always felt those players never got the celebration — outside of a small gathering at the Inner Harbor — they deserved. The team did everything we asked only for the city to turn away once the NFL came back,”

Snyder is glad to have an NFL team in the city, but “I wish there could have been a way to support both teams. The [Stallions story] would make a great “30-for-30” on ESPN.

A 1996 graduate of Pikesville High and a 2000 grad of Towson University, Snyder has lived in the Essex/Middle River area for 20 years. He’s married (Lori) and has three children: William, 16; and Megan and Marissa, both 13.

Snyder has worked in local media for 20 years: sports and news reporter for the Annapolis Capital; sportswriter for the Baltimore Examiner; and on the digital desks at WMAR and WBAL.

Snyder’s books can be found at Barnes and Noble, Amazon and other online booksellers.

Now — writing about a championship team that didn’t get its due is one thing; but why dredge up memories of the season that marked the end of an era of Orioles’ dominance?

(From 1963 through 1987, the Orioles had one losing season — 1967. They had five 100-win seasons over that span, won eight division titles, eight American League pennants and four World Series. Since 1998: two division titles, three wild card berths, no pennants.)

“I was nine when that 1988 season took place,” Snyder said. “I remember watching the games I could on TV and listening to the others on the radio, believing that game would be the one where they would finally win.

“It’s easy to write a book about a World Series team. It’s a lot harder to write about a team that started 0-21. Surprisingly, almost all of the players I connected with, including Cal [Ripken Jr.], were more than willing to talk about the season.”

Snyder said his inspiration for the book wasn’t so much the train wreck of the 1988 season, but the “Why Not?” season that followed.

“That season in 1989 would not have been as special without the pain the team and city went through in 1988,’ he said.

That cut the Orioles lead to 2.5 games. They held on to first place for the whole of August, then dropped to second on the first day of September.

The Orioles trailed Toronto by one game with three games remaining: three games in Toronto.

The Blue Jays won the first game 2-1 in 11 innings; Toronto had tied the score in the bottom of the eighth.

Toronto clinched the division title with a 4-3 win in the second game. The Orioles again led entering the bottom of the eighth, when the Blue Jays scored three runs.

“Ironically, I started writing this book after the 2016 season when the Orioles were coming off a wild card appearance,” Snyder said “My belief was there was no way the Orioles would ever have a worst season than 1988.”

What was difficult to believe was the 1988 season was just five years after the Orioles last World Series championship in 1983.

“This was just a poorly-constructed team,” was Snyder’s assessment of the 1988 squad. “[It was a] combination of poor drafting, poor player development, bad decisions on free agents and the decision to hold on to some players who were key to their past success for too long.

“It’s hard to believe a team that had a lineup with Cal Ripken Jr., Eddie Murray and Fred Lynn couldn’t luck into a win [in the first 21 games]. Very few of those losses were blowouts.”

Ten of the 21 losses to open the season were by two or fewer runs. Three other losses were by three runs.

“None of the players I spoke with were obviously about being part of that infamous team. Many look to that experience as a teaching moment for younger players … they have tried to point to that season as a way to deal with adversity and point to 1989 as to how quickly things can turn around for you.”