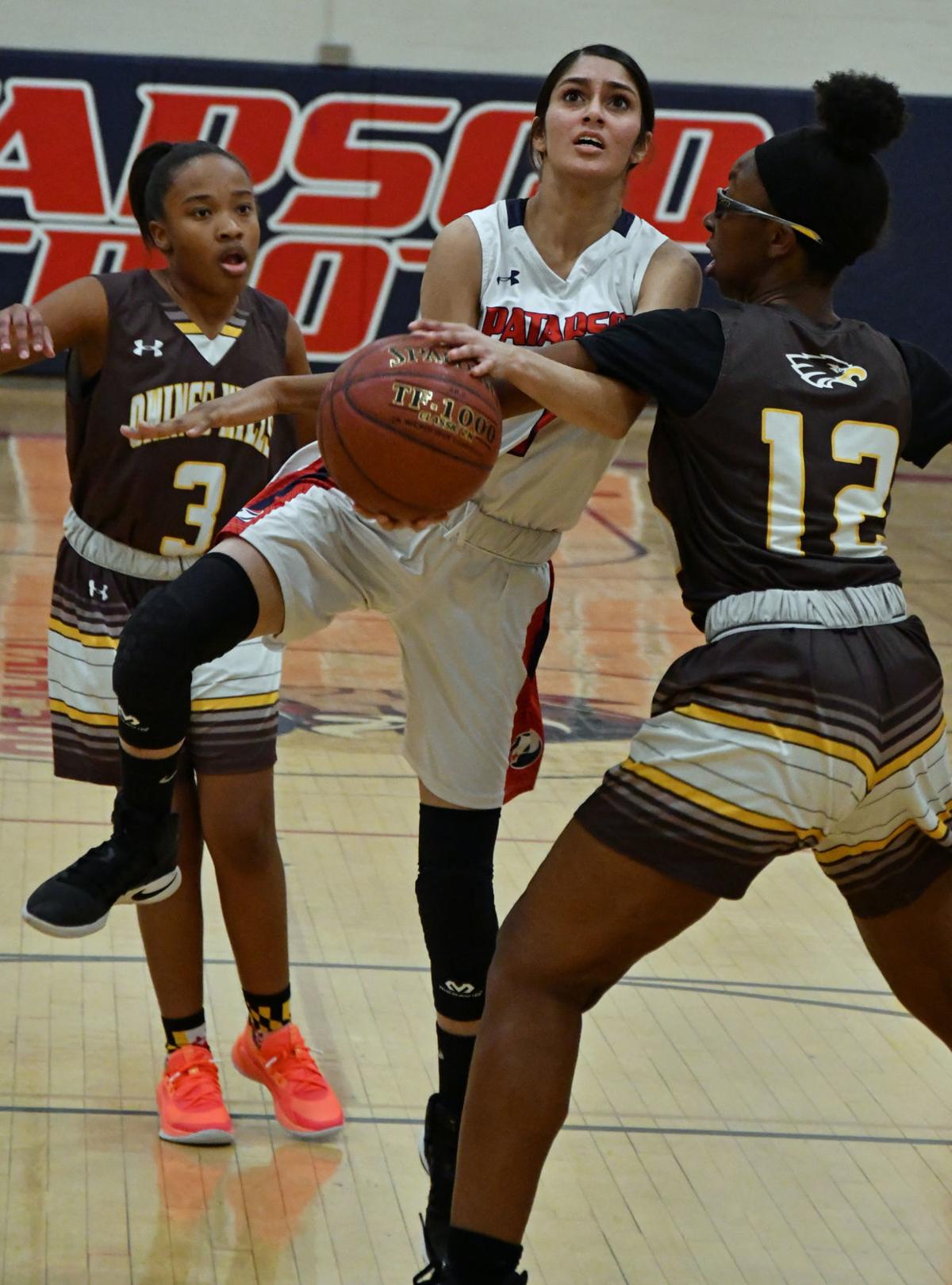 Jesse Kaur draws a foul while driving to the basket against Owings Mills. 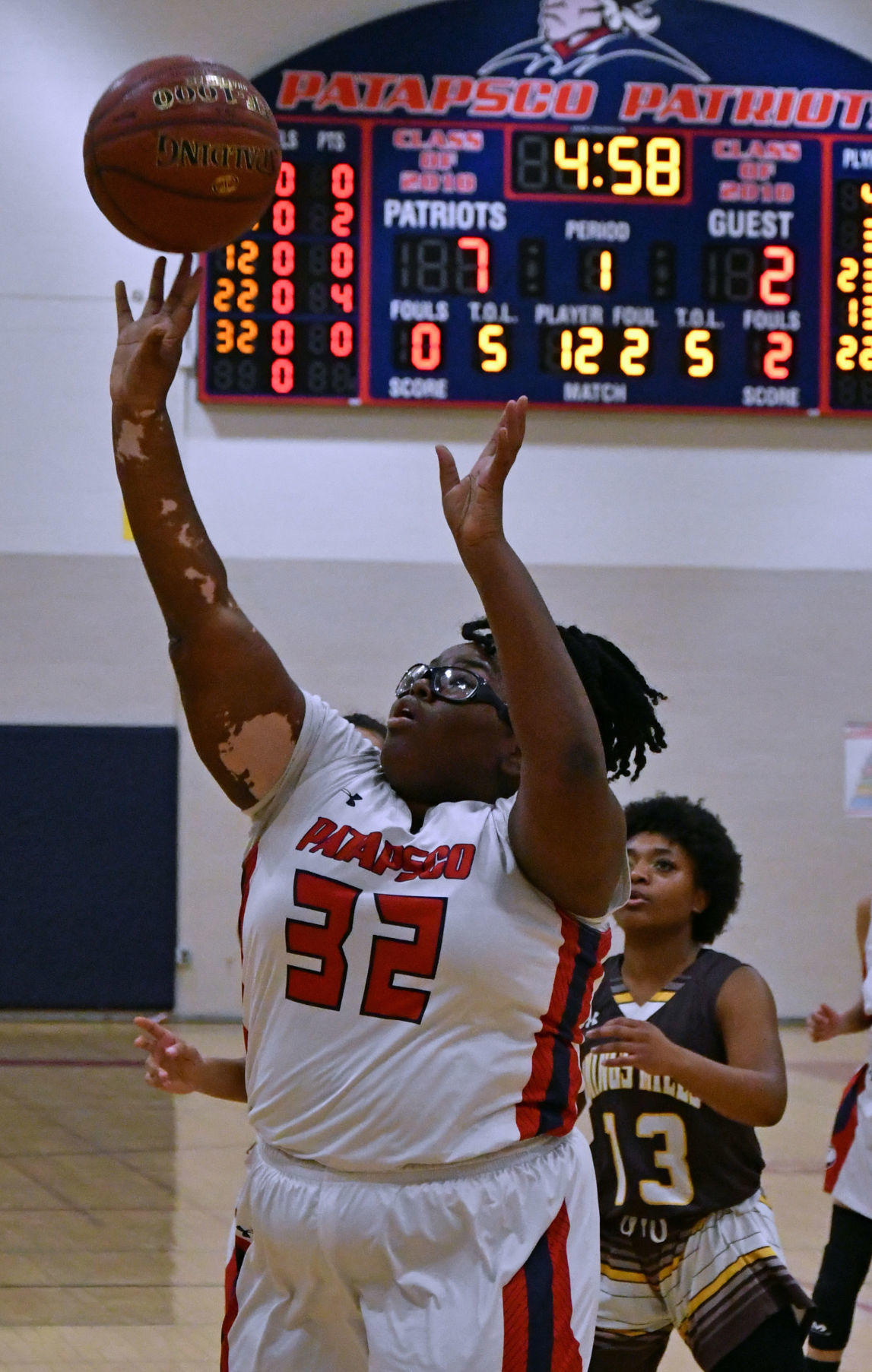 Madina Diallo hits a short jumper during the win over Owings Mills. 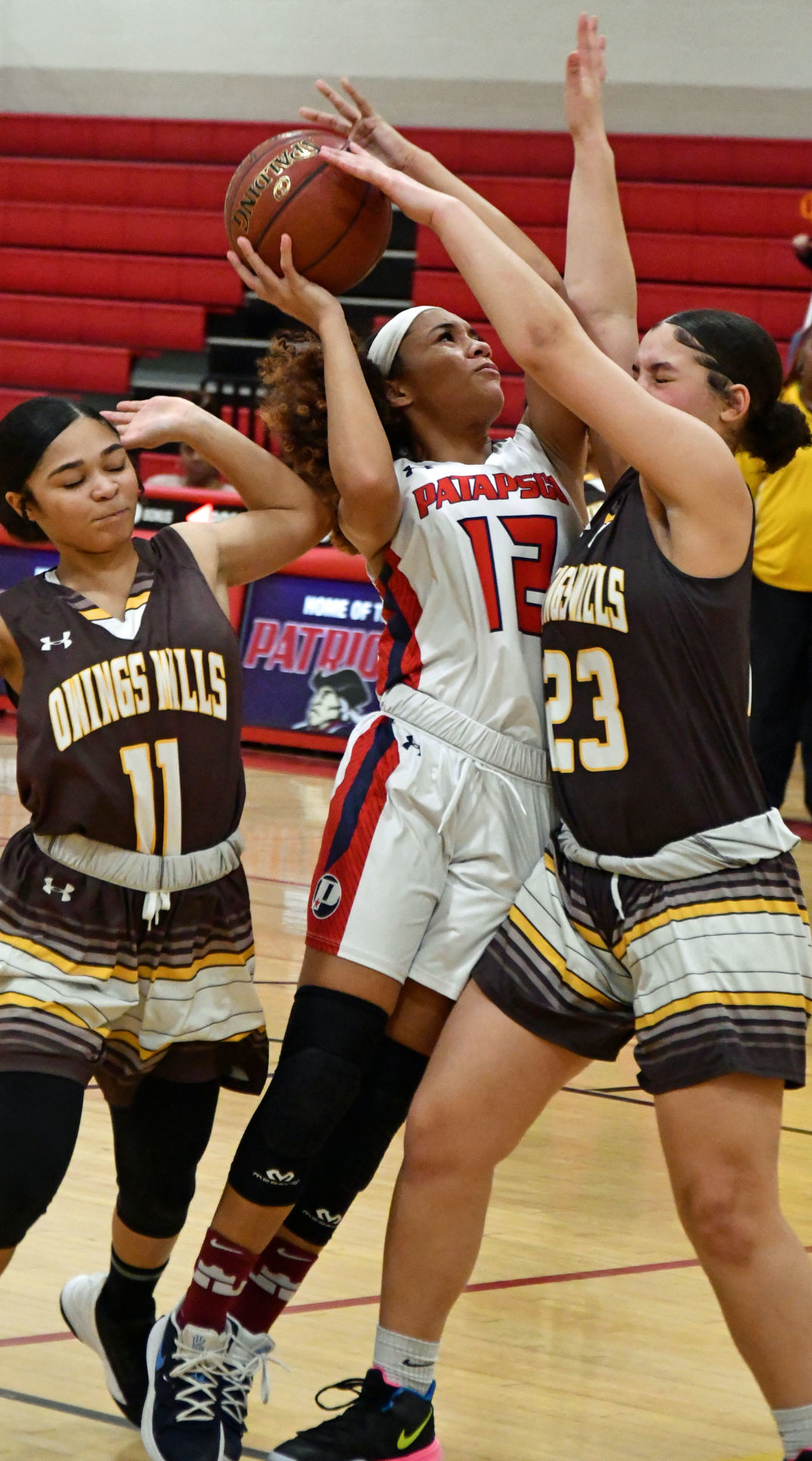 Kayla Santiago takes on a pair of Owings Mills defenders. 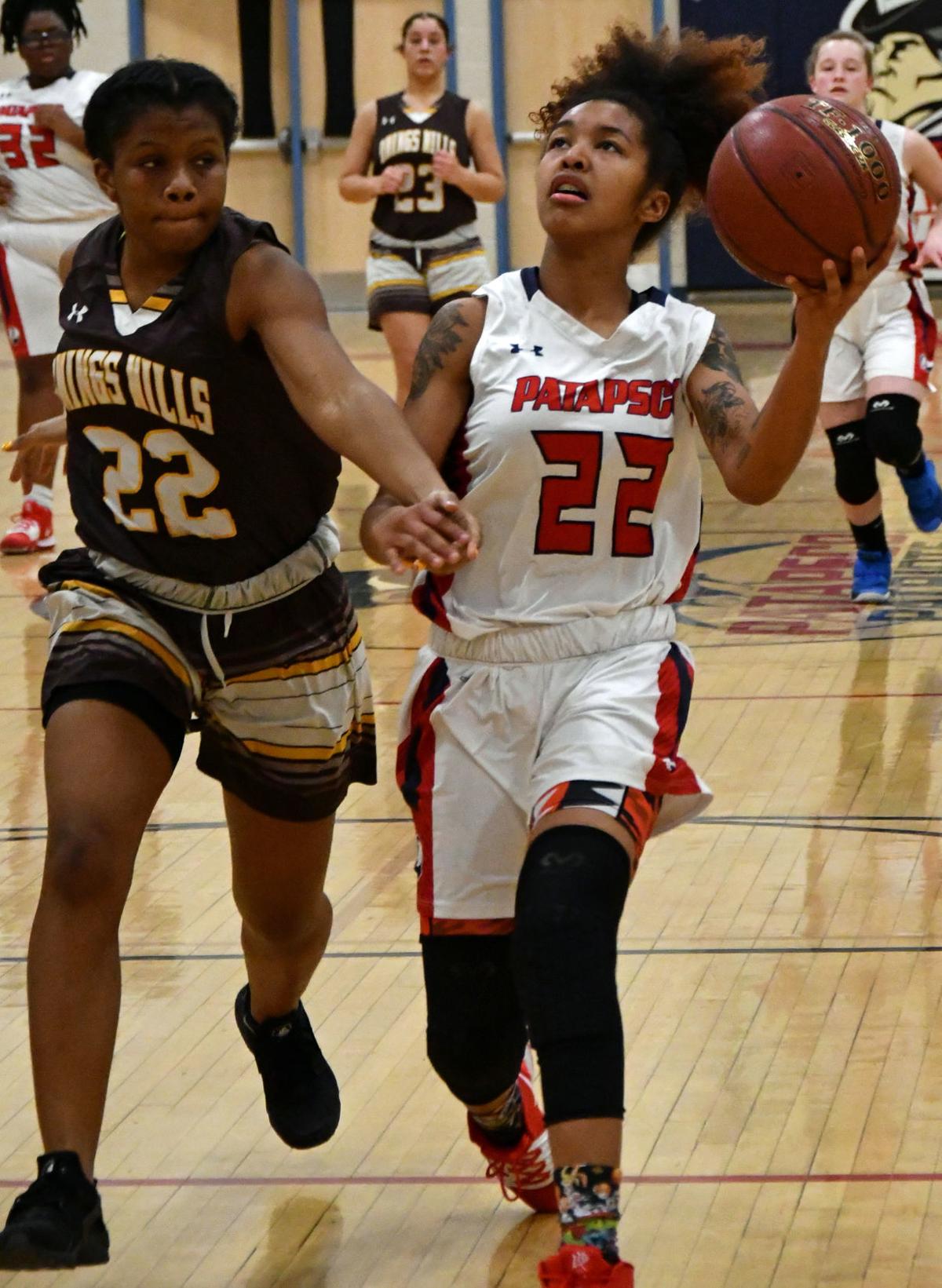 Lanyia Jacobs prepares to score two of her 19 points against Owings Mills. 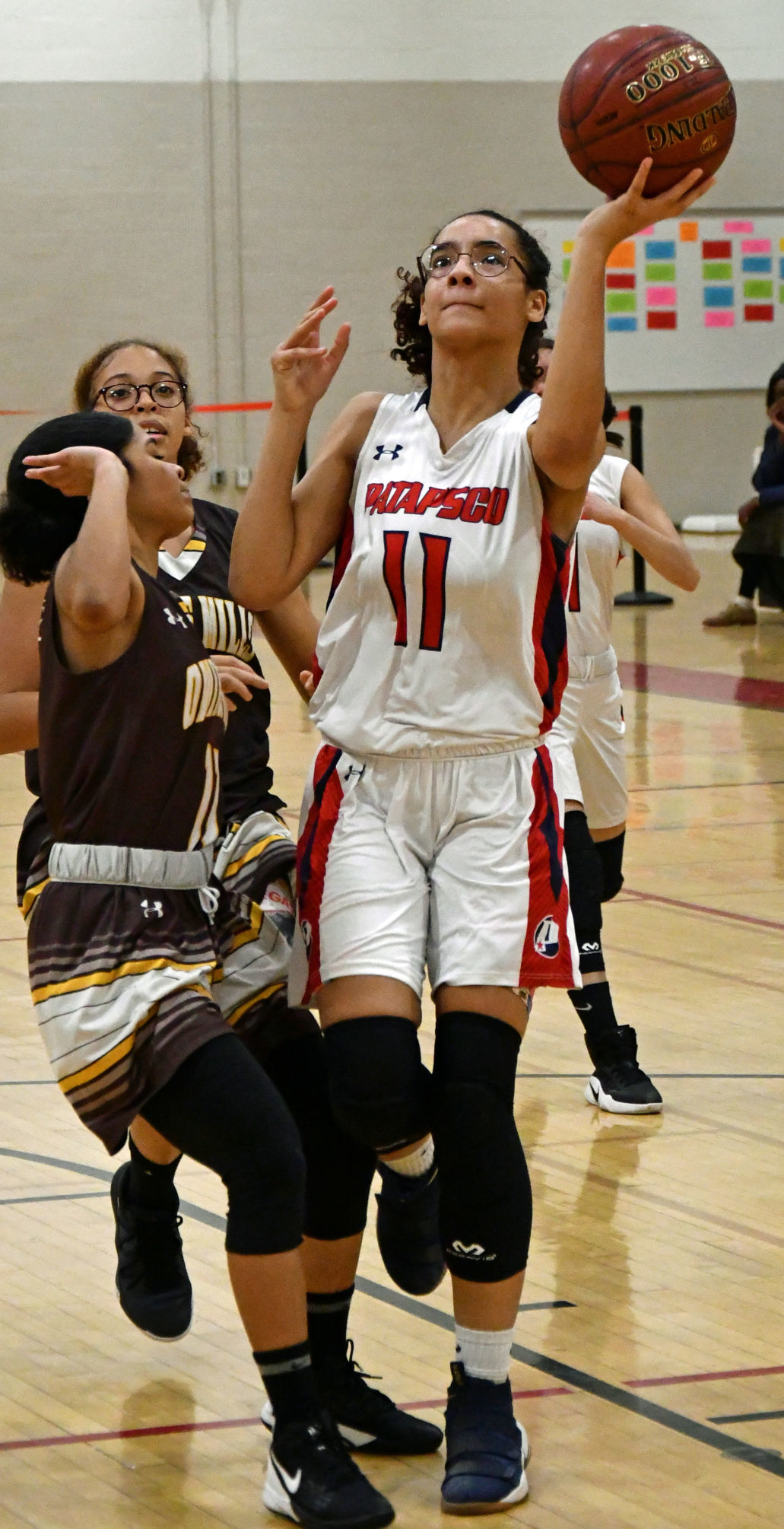 Lanyia Jacobs prepares to score two of her 19 points against Owings Mills.

Entering the new decade, the three local girls basketball teams had a combined record of 0-10.

Now they have a combined record of 1-17.

Patapsco (1-4) picked up the first win, with a 43-28 victory over visiting Owings Mills on Friday.

Dundalk had come close on Jan. 8, losing to visiting Carver A&T 44-39. The Owls had also lost to Owings Mills 18-16 in their season opener, giving Dundalk the two closest defeats until Patapsco’s win.

(Patapsco lost to Eastern Tech 23-19 in their season-opener.)

Patapsco jumped out to a 9-2 lead as Lanyia Jacobs turned two steals into layups and Morgan Dennis and Madina Diallo each had a basket.

The Patriots then cooled off, adding just one basket over the final five minutes of the quarter for an 11-6 lead.

Patapsco steadily extended that lead over the course of the second quarter: a three-pointer by Jacobs … a layup by Jacobs … a rebound and putback by Jacobs … {span}while the Patapsco defense held Owings Mills scoreless for 12 consecutive possessions while forcing{/span} nine turnovers and allowing just three shots.

Patapsco eventually built its lead to 36-16 early in the fourth quarter before a late Golden Eagles’ run somewhat respectable.

Jacobs finished with 19 points. Dennis scored 10 points and Diallo had six. They were the only three Patriots’ players with baskets.

The final margin could have been wider. The Patriots were only 9-for-31 from the foul line, which would have hurt them in a closer game.

The Patriots were to host Dundalk on Wednesday and play at Pikesville on Friday.

The Owls (0-6) lost to visiting Kenwood on Monday 48-15. Dundalk will play at Hereford on Friday.

The Pointers were to play at Parkville on Wednesday and at Milford Mill on Friday.

Essex is now 18-2 overall and 4-0 in the Maryland JuCo League. The Knights remained at #17 in the NJCAA Division II national rankings.

The Knights were to host Frederick Community College on Wednesday, and next host Prince George’s on Jan. 22.

Frederick and Essex are tied for first place in the Maryland JuCo League, each with 4-0 marks. Frederick is 11-4 overall.