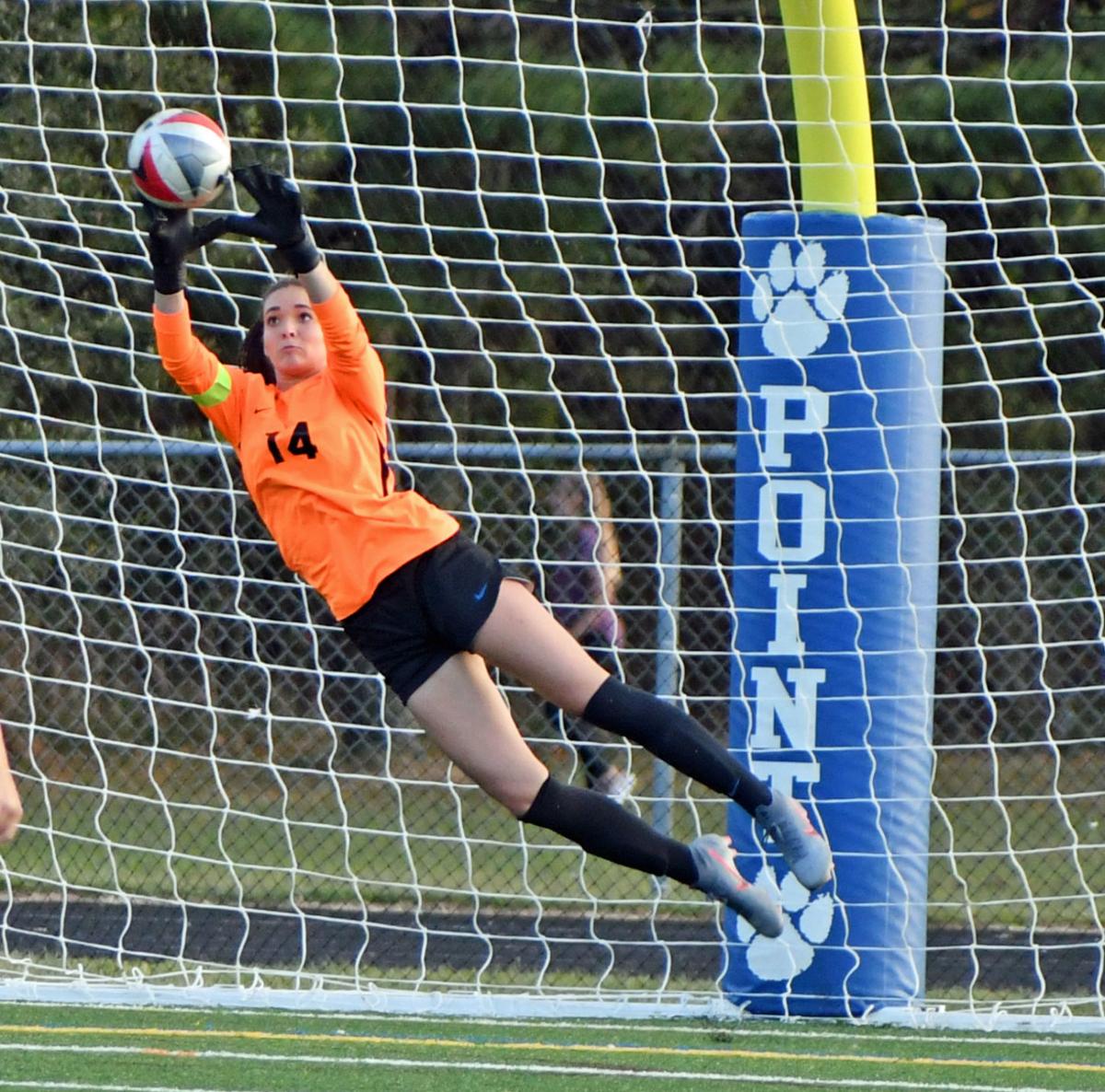 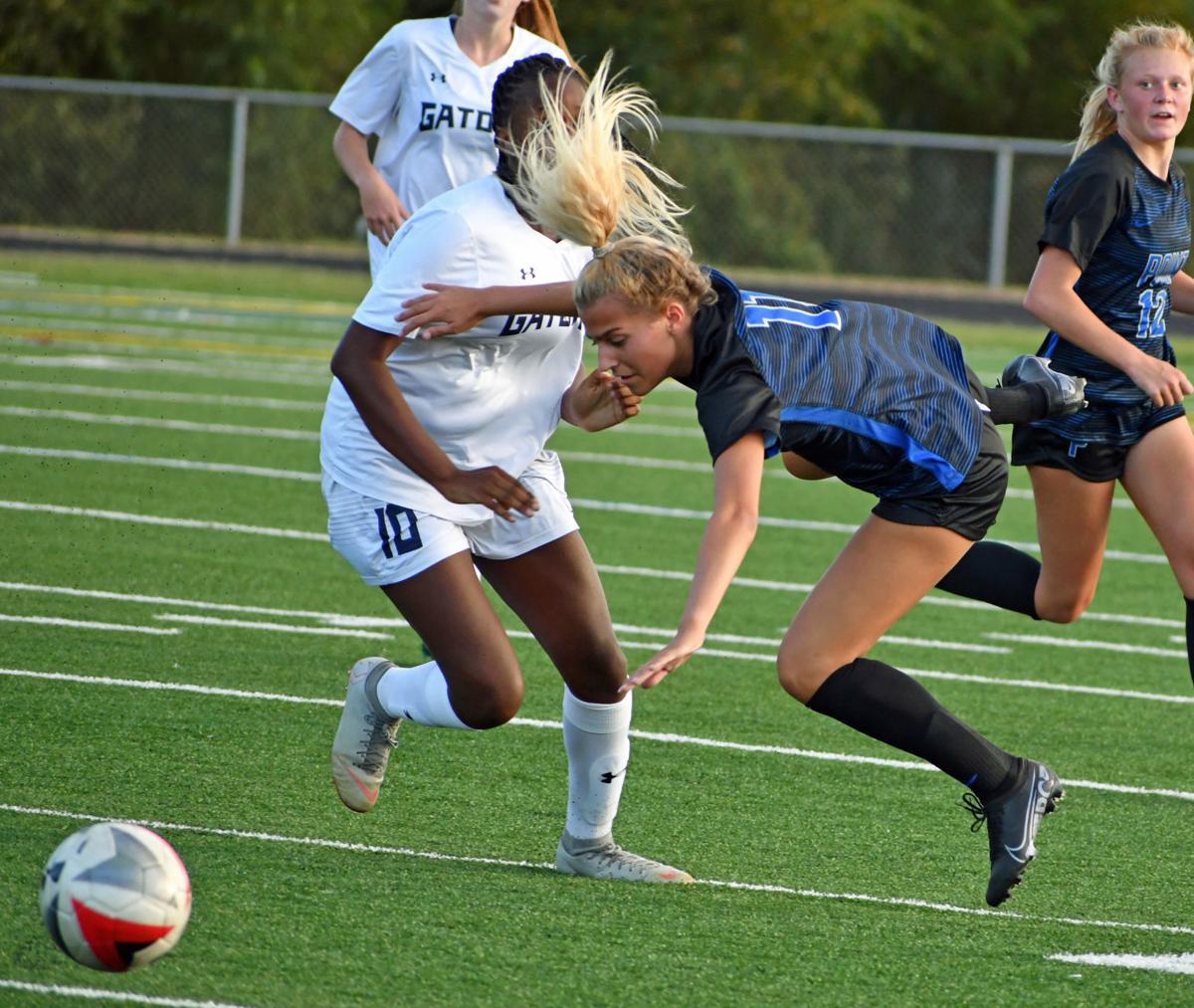 Elsa Turner scored the only goal in Sparrows Point’s 1-0 win over Perry Hall. 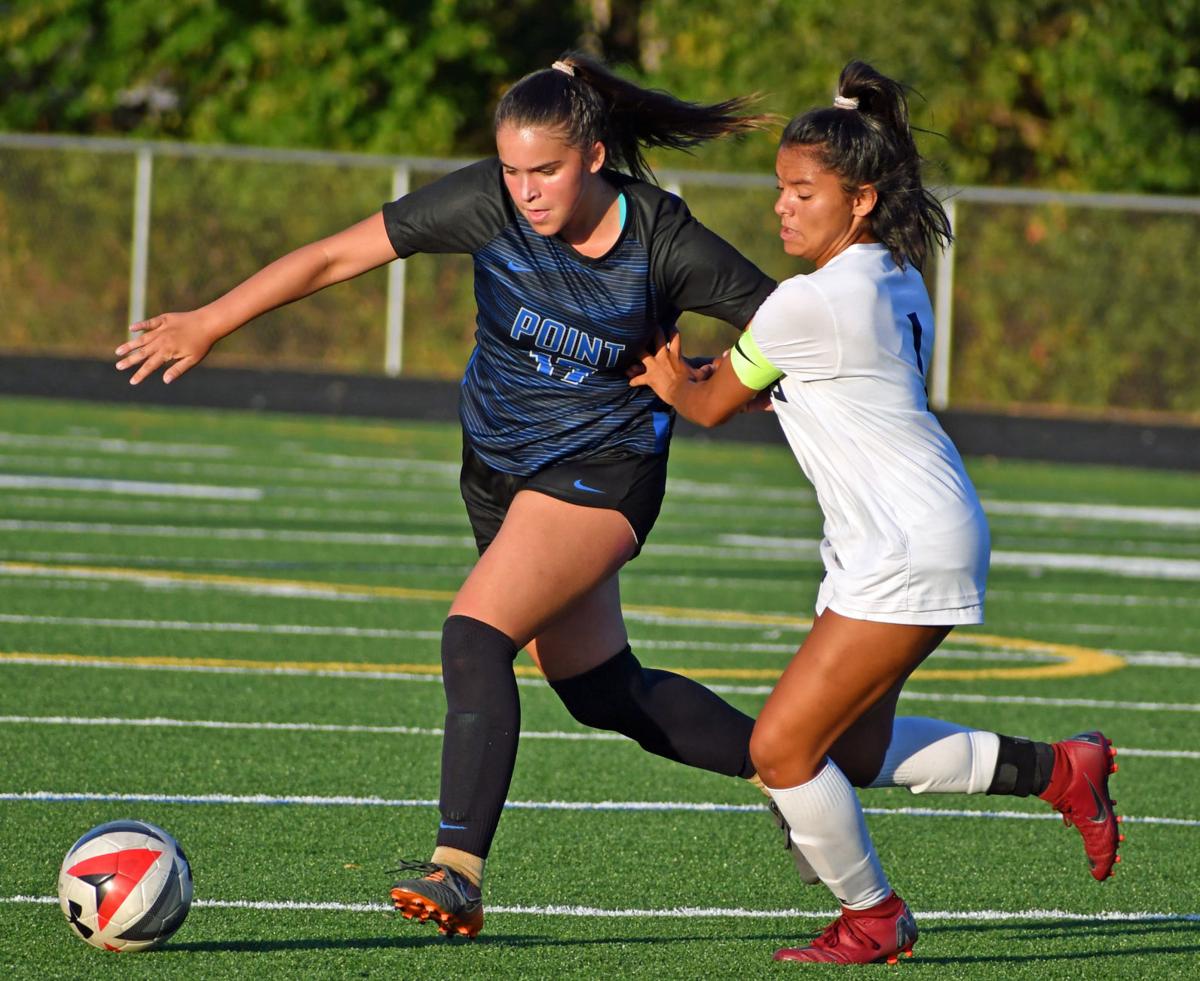 Jade Weir scored a goal during Sparrows Point’s 2-1 win over Hereford. Here, she races a Perry Hall player for the ball. 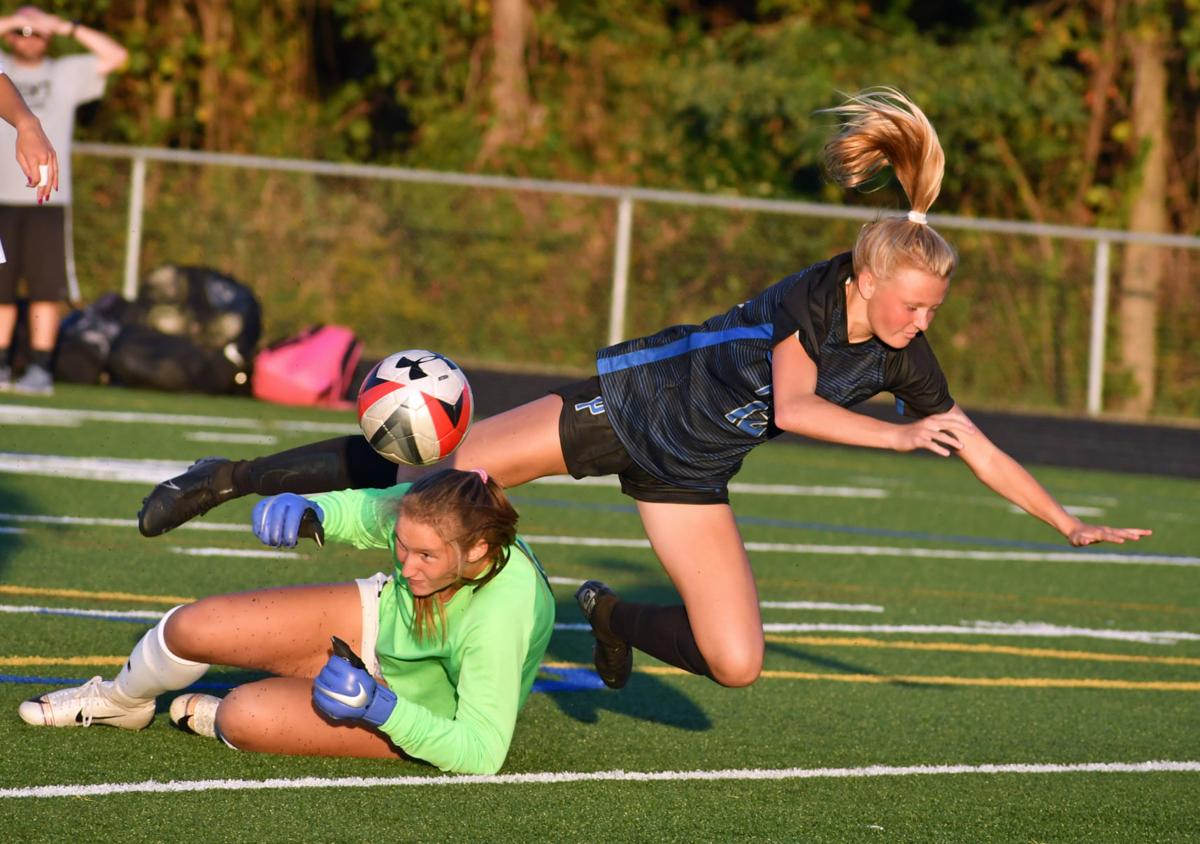 Kylie Staubitz of Sparrows Point dives to avoid a collision with the Perry Hall goalkeeper. 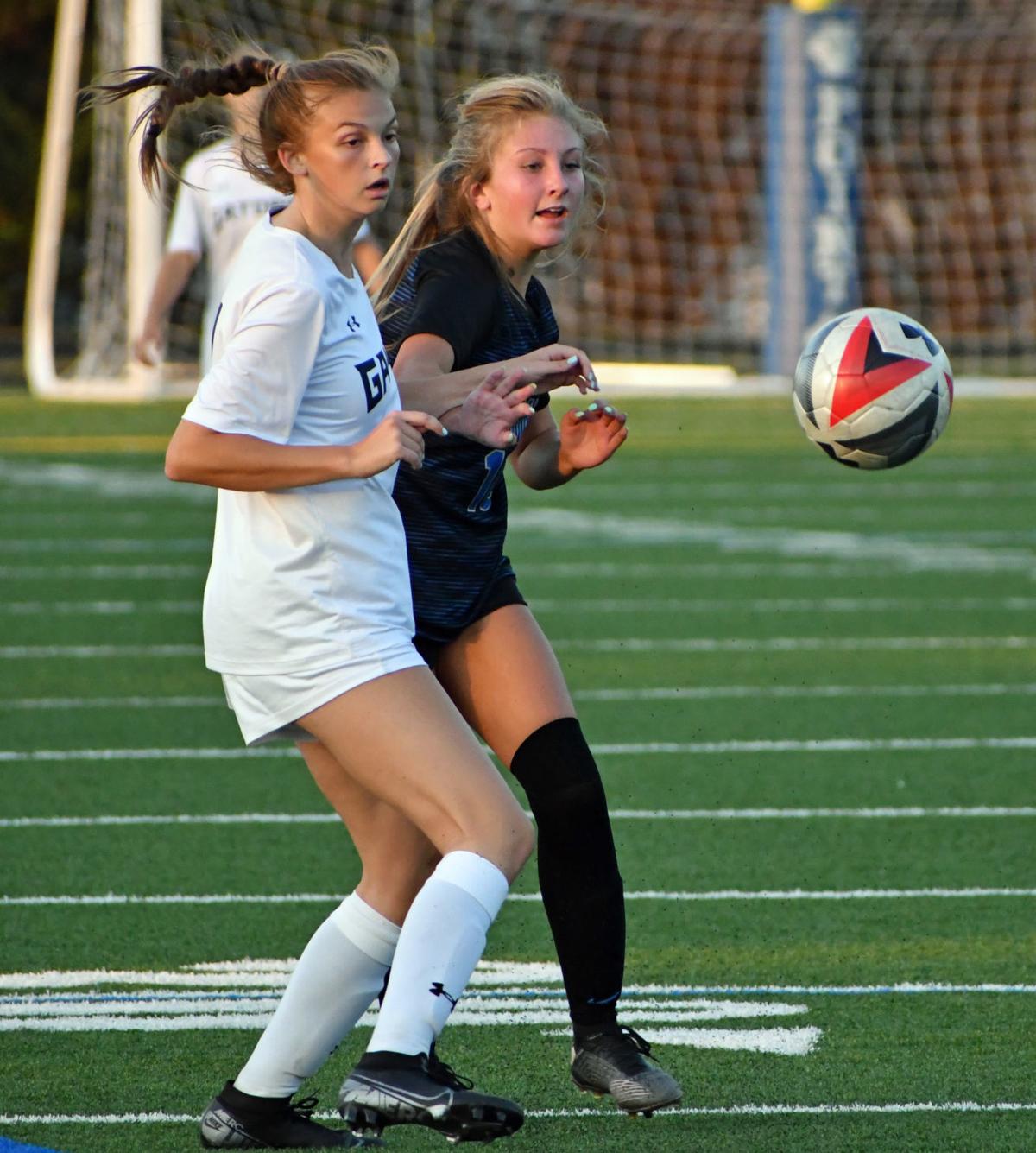 Laci Bell and a Perry Hall defender await the arrival of a pass.

Elsa Turner scored the only goal in Sparrows Point’s 1-0 win over Perry Hall.

Jade Weir scored a goal during Sparrows Point’s 2-1 win over Hereford. Here, she races a Perry Hall player for the ball.

Kylie Staubitz of Sparrows Point dives to avoid a collision with the Perry Hall goalkeeper.

Laci Bell and a Perry Hall defender await the arrival of a pass.

The Sparrows Point girls soccer team defeated Perry Hall twice last season, leading them to joke they were the “unofficial” Class 4A state champs after the Gators went on to win that crown.

(Said joke made after the Pointers won their sixth consecutive Class 1A state title.)

When Sparrows Point hosted Perry Hall last week, the outcome was a little different: the Pointers still came out on top, 1-0, but at least the game didn’t go into overtime as it did in both meetings last season.

Elsa Turner scored with five minutes remaining in the first half, and the Pointer defense (which had given up one goal all season at that point) took care of the rest.

A long drive downfield had been taken by Kylie Staubitz; her shot was knocked wide by a Gator defender, but in the process the Perry Hall keeper came too far out of the goal.

The ball bounced to the right side, where Turner beat two defenders and knocked it into the open net.

“I think [the goalkeeper] just missed it,” Turner said. “There was a girl coming at me from the side, so I just hit it in as quick as I could.

“I was scared I was going to miss the open net.”

Perry Hall generated several scoring opportunities over the course of the game, but were denied multiple times by athletic saves from Pointer keeper Jaddah Foos.

“I’ve been playing with, and against, these [Perry Hall players] for a very long time,” Foos said. “And I know they shoot high every single time. I didn’t see a low shot all game.”

Sparrows Point followed up that September 24 victory with a win over another tough rival two days later.

The Pointers won at Hereford on Thursday, 2-1 in overtime.

Sara Gruntowicz and Jade Weir scored for the Pointers.

It was the first meeting between the two teams since Hereford stunned Sparrows Point in the 2017 Baltimore County championship game, scoring two goals in the final two-and-a-half minutes for a 3-2 win that ended Sparrows Point’s streak of three straight county titles.

The two teams were supposed to play last season, bit the game was suspended after 10 minutes by lightning and the two schools could not agree on a makeup date.

Sparrows Point played both games with freshman Savana Iacovelli, who had already made an impression in the young season.

Iacovelli was held out as a precaution after bumping her head in gym class.

“I really felt like we pulled it together in the second half,” Sparrows Point coach Lori Sexton said after thePerry Hall game. “We didn’t put the ball in the back of the net, but we held them for sure.”

Both games were good tests for the Pointers after a stretch of four easy shutout wins.

“It was a big change,” Sexton said. “A transition into having to play hard 100 percent. We had to play hard and work hard to get the win.”

In other local games. Dundalk lost to visiting Franklin 7-1 on Thursday. The Owls were to play at Kenwood on Tuesday and host Oakland Mills on Thursday.

Patapsco lost at Oakland Mills 2-1 on Sept. 25. The Patriots were to play at Parkville on Tuesday and at Carver A&T on Thursday.