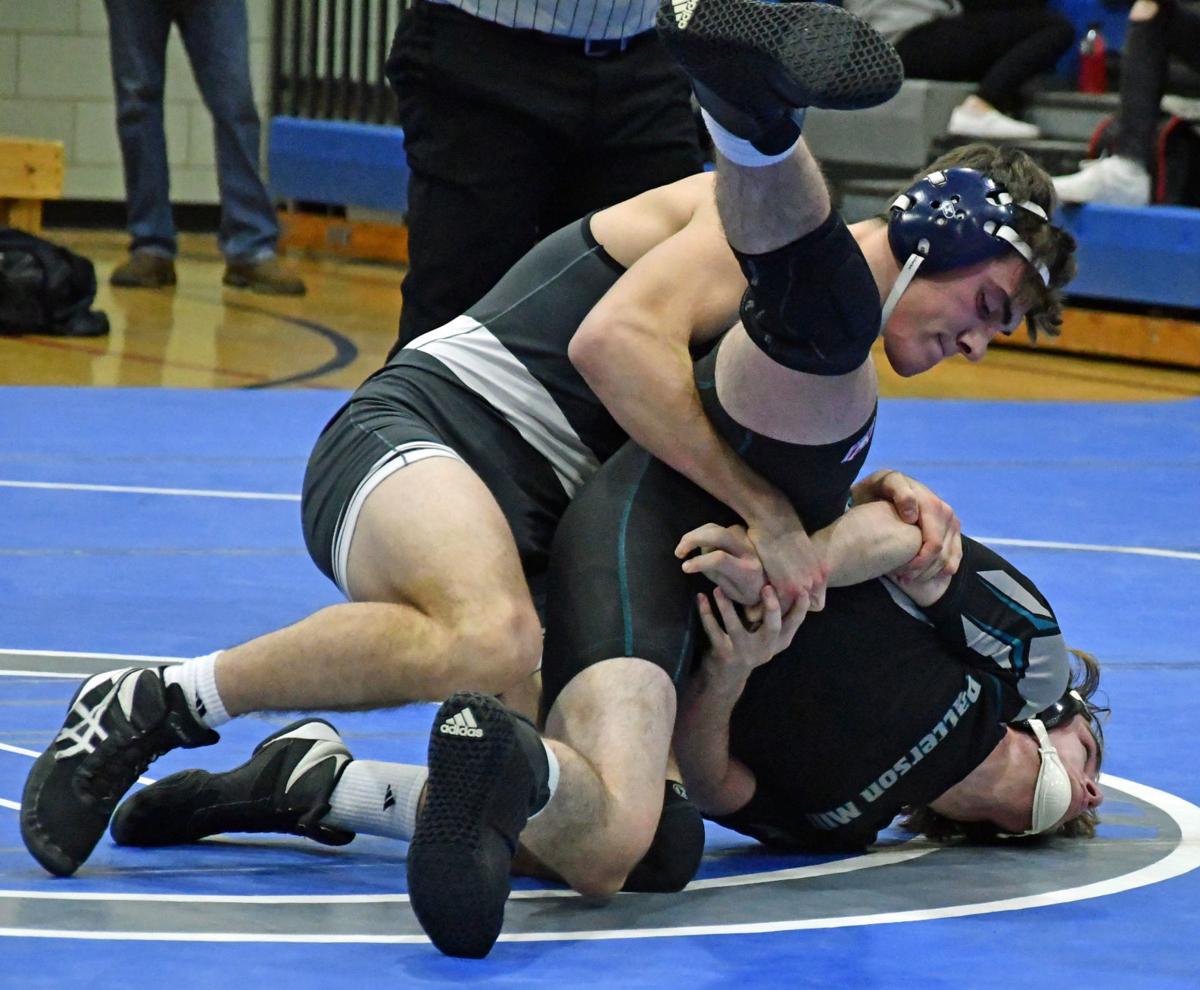 Jake Lure sticks a Patterson Mill wrestler into the mat prior to pinning him. 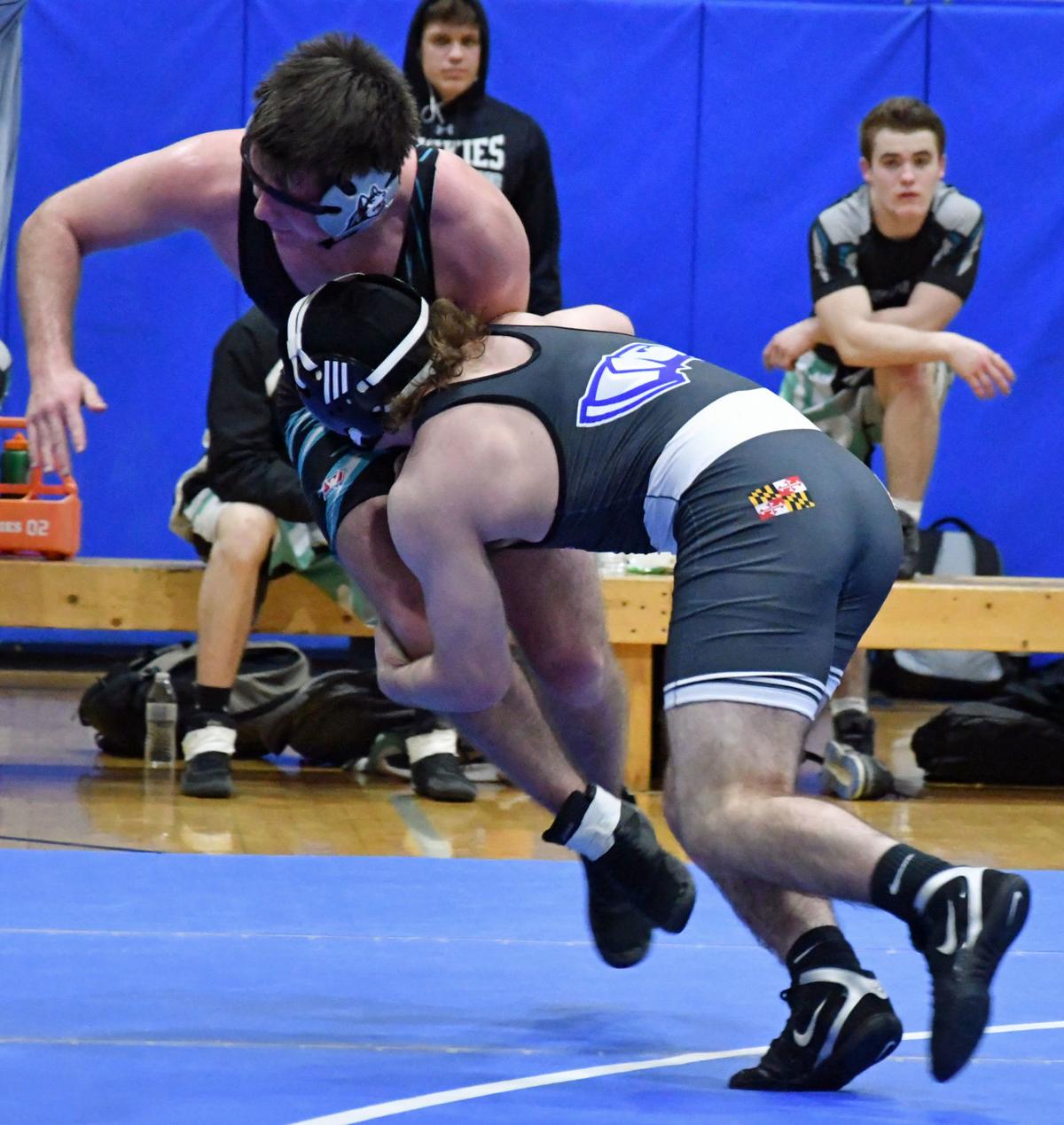 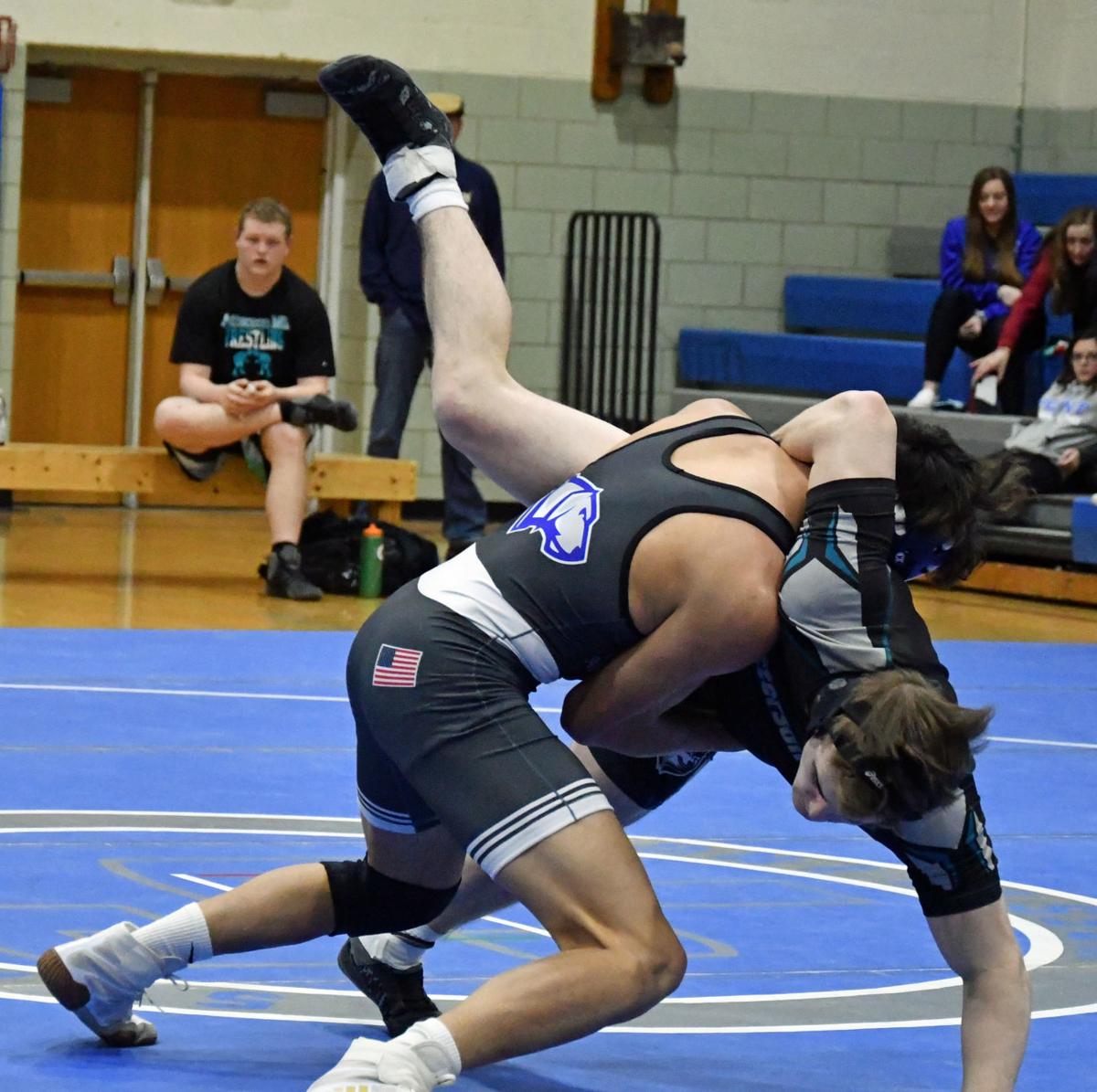 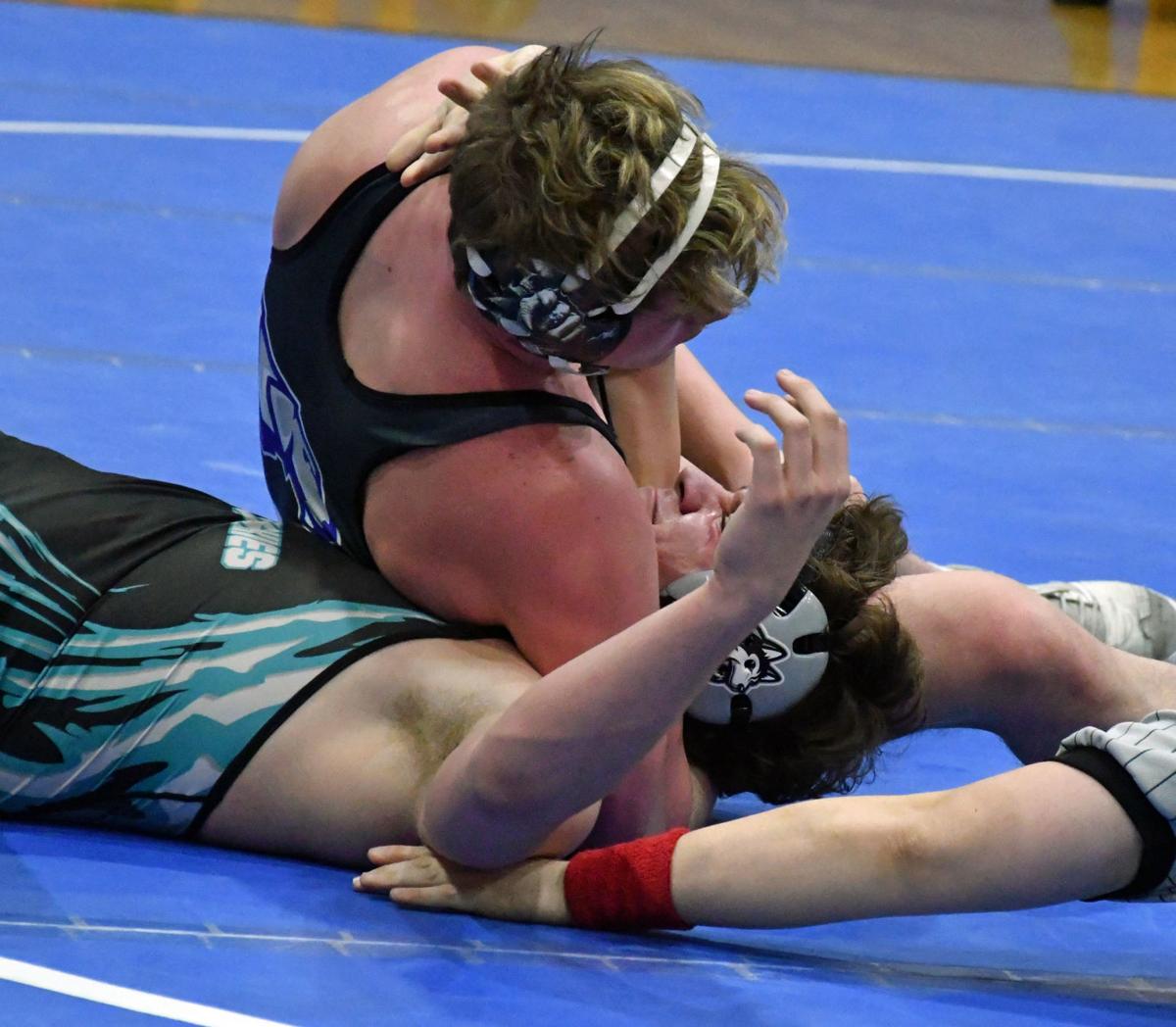 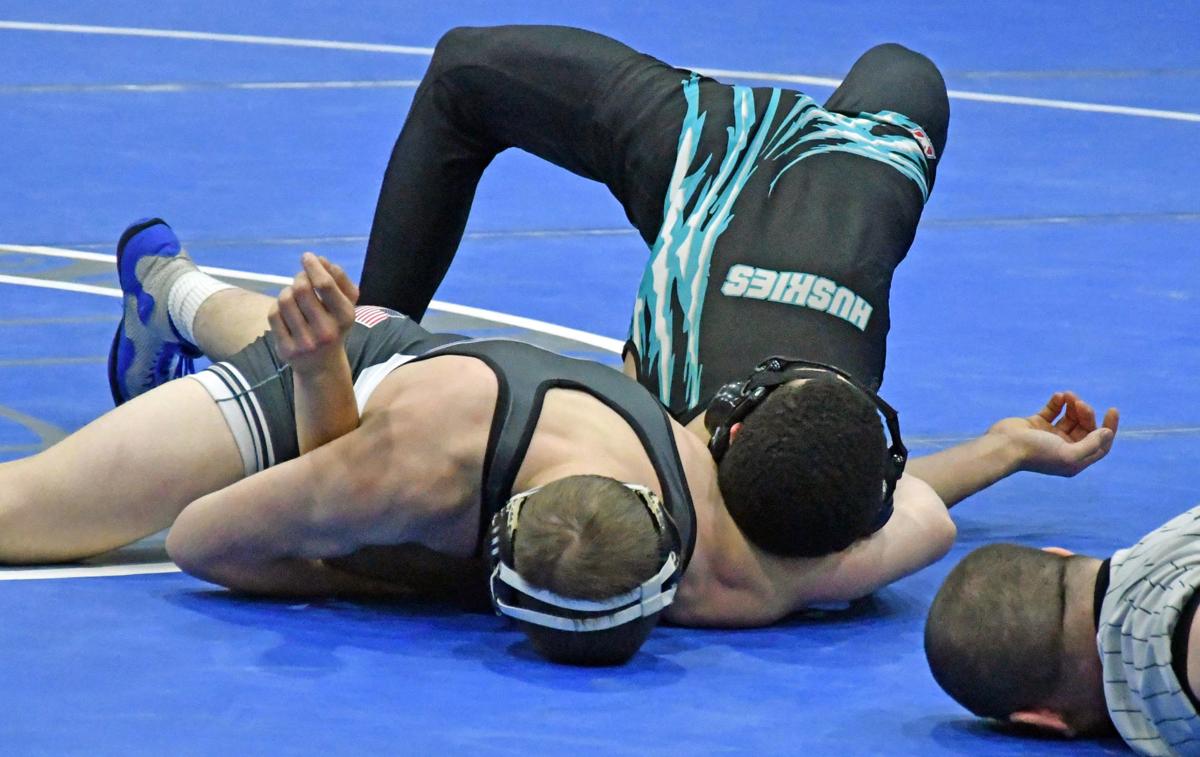 Richard Davis didn’t succeed in pinning this Patterson Mill wrestler, but he did win a major decision.

Jake Lure sticks a Patterson Mill wrestler into the mat prior to pinning him.

Richard Davis didn’t succeed in pinning this Patterson Mill wrestler, but he did win a major decision.

The Sparrows Point wrestling team rolled over another quality program when it thrashed visiting Patterson Mill 62-10 on Jan. 28.

Spicing up the match a bit was the 100th career victory for the Pointers’ Jake Rallo, and a match between the first and third-ranked 195-pound wrestlers in Maryland Class 1A/2A.

Lexx Carr of Sparrows Point, the top-ranked 195-pounder, pinned third-ranked Connor Morton of Patterson Mill with 1:07 remaining in the second period in the last match of the night.

Carr is ranked fifth overall in the state, while Morton is ranked 13th.

“The first thing I want to do in a match is dominate, take control of the match,” Carr said. “There’s no way [an opponent] can stop me if I’m always on the attack.”

Carr led 2-0 on a takedown after the first period, then escaped, took Morton down and pinned him in the second period.

Morton did not score a point in the match.

“He didn’t make any mistakes,” Carr said. “I got him in a headlock, took him down.”

Rallo had to work the whole six minutes for his 100th win, but he was in control the entire match before winning 16-3 in a major decision.

After getting two takedowns in the first period, Rallo earned a takedown and a three-point near-fall in the second period.

He started the third period with an escape, scored a takedown, then intentionally allowed his Patterson Mill opponent to escape (twice) to score another two takedowns.

The Huskies forfeited four weight classes during the match.

The match started at 285 pounds, where Zack Barnickle scored a pin for Sparrows Point.

Two forfeits extended Sparrows Point’s lead to 18-6, but Patterson Mill won a major decision at 120 to make it appear the match would be competitive.

Two forfeits sandwiched around a 13-2 major decision by Richard Davis made it 34-10, then two narrow decisions went the Pointers’ way for a 40-10 lead with four matches remaining.

Hoenig had a takedown in the first period and an escape in the third period.

He was taken down twice over the last two periods, but held on to win because he was never put on his back.

Sparrows Point lost at South River on Friday, 46-23, to finish 21-1 in the regular season and clinch the top seed in the Class 2A North Region duals tournament.

Helping Sparrows Point secure the top seed and home court was a 48-36 win at Owings Mills on Jan. 23.

Ermani, Lure and Brower had the pins. Carr did not wrestle as Owings Mills got pins in the last three matches with Sparrows Point having already clinched the win.