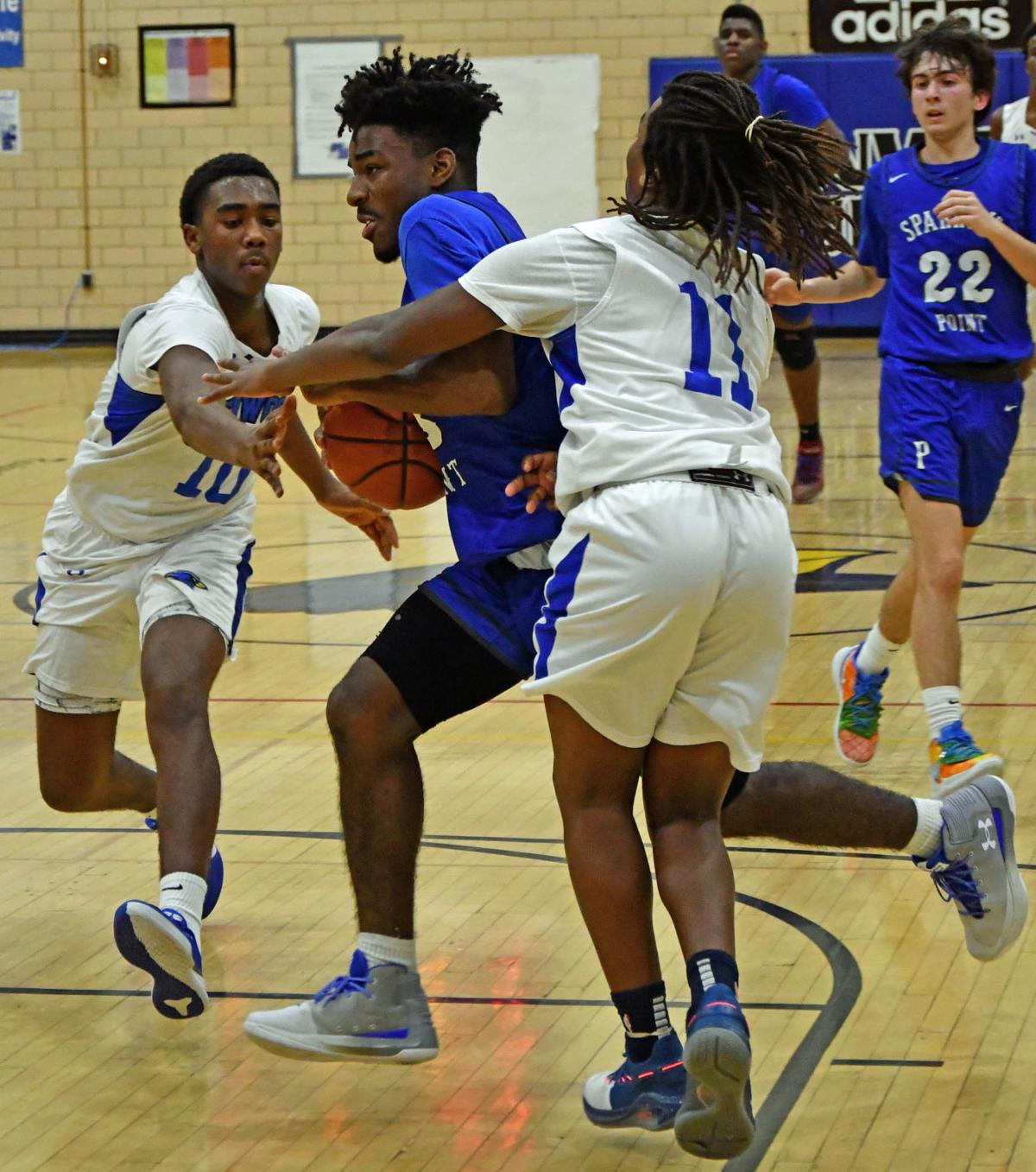 Devin Adams and Yvairre Anderson try to stop a drive by Jermaine Smith of Sparrows Point. 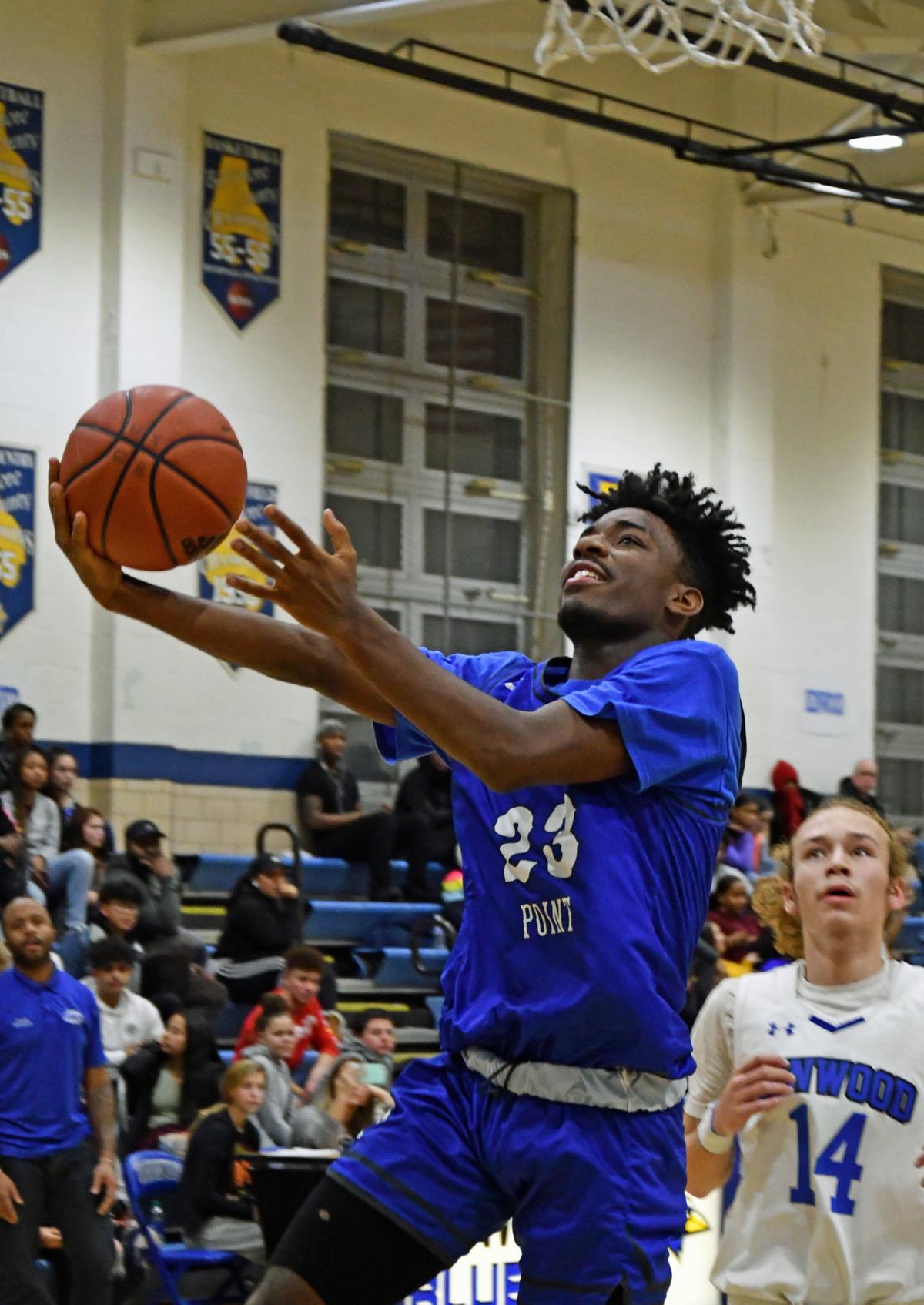 Jermaine Smith drives to the basket during Sparrows Point’s game at Kenwood on Friday. 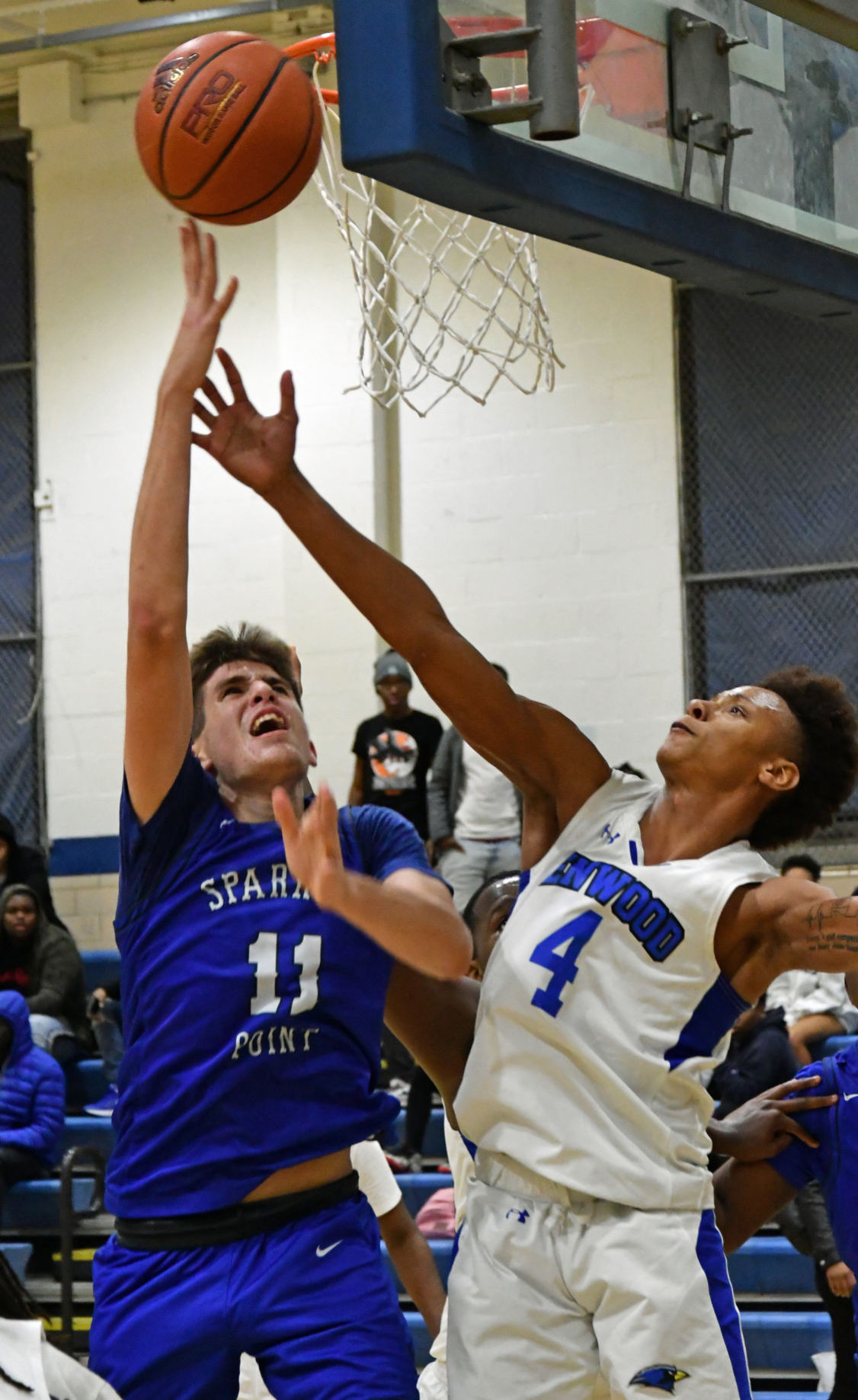 Ramon Villanueva puts up what turned out to be the game-winning basket during Sparrows Point’s 38-37 win at Kenwood on Friday.

Devin Adams and Yvairre Anderson try to stop a drive by Jermaine Smith of Sparrows Point.

Jermaine Smith drives to the basket during Sparrows Point’s game at Kenwood on Friday.

Ramon Villanueva puts up what turned out to be the game-winning basket during Sparrows Point’s 38-37 win at Kenwood on Friday.

The Sparrows Point boys basketball team entered this season with a total of four wins over the previous four seasons — combined.

The Pointers now have two wins in their first three games of this season after a thrilling 38-37 victory at Kenwood on Friday.

Trailing 36-33 with a minute remaining, Sparrows Point got a layup from Omarion Reid and took the lead when Ramon Villanueva converted a three-point play with 26 seconds left in the game.

Villanueva scored on a baseline drive, was fouled, and made the free throw to give the Pointers their first lead since halftime, 38-36.

Kenwood played for the last shot, missed, but drew a foul with three seconds remaining.

The shooter made the first free throw, but missed the second. Reid controlled the rebound and was fouled with 1.4 seconds showing on the clock.

He missed both foul shots, but Sparrows Point came up with the rebound.

“We have guys this year that have a passion for the game, “ Pointer coach Marcell Marshall said. “It puts us in a better situation in teaching them the game and giving them what they need.

“We have a lot to improve on, but we’re showing signs of being a good program.”

The game was close from start to finish, with neither team ever approaching a double-digit lead.Sparrows Point’s biggest lead was 18-14 midway through the second quarter; Kenwood led 24-20 two minutes into the third quarter.

That 10-2 Bluebird run, starting in the last minute of the first half and extending through the first two minutes of the second half, appeared to be a sign the home team was finally going to pull away like it did last season in a 65-21 win.

But the Pointers held Kenwood to three points for the rest of the quarter, while chipping away to go into the fourth quarter tied at 27.

The Bluebirds hurt themselves by missing five of six free throws over that span.

The Pointers helped themselves with a strong effort on the offensive backboards. Villanueva made it 24-22 with a short jumper that was Sparrows Point’s fourth shot of the possession (three offensive rebounds) and a layup by Reid on the next trip down the floor tied the game at 24-24.

Villanueva’s 3-pointer with a minute left in the quarter tied the game at 27.

The score remained tied for over three minutes as each team struggled from the floor and the foul line.The Pointers missed five shots and two free throws and had four turnovers during that stretch.

Kenwood, for its part, missed three shots and had four turnovers (two of them Sparrows Point steals).

The Bluebirds finally made a shot to take a 29-27 lead with 5:43 remaining. They drew fouls on their next two possessions, but only converted two of four (one miss, crucially, was a successful shot negated by a lane violation).

Sparrows Point made only one of 10 free throws. In a six-point loss at Towson last week, the Pointers missed seven foul shots.

“Free throws are something we definitely need to work on,” Marshall said. “One of the things we need to tweak a little bit.”

“We’ve spent a lot of time working on beating the press,” Marshall said. “Last year we struggled against it; this year we’ve put a lot of emphasis on beating it.”

Winning a close game should also benefit a program that, as mentioned earlier, doesn’t have a lot of experience with being in close games.

“But we still have a lot of stuff to work on,” Marshall said. “Just coming out with a win is good enough for me.”

Nonetheless, this is the first time Sparrows Point (2-1) has had a winning record since opening the 2013-14 season with two wins (and finishing with eight).

Sparrows Point was to host Overlea on Wednesday in its last game before the break. The Pointers play at Eastern Tech on Jan. 3.