Sean Perry of Dundalk puts up a shot over Sparrows Point’s Christopher Rolfes. 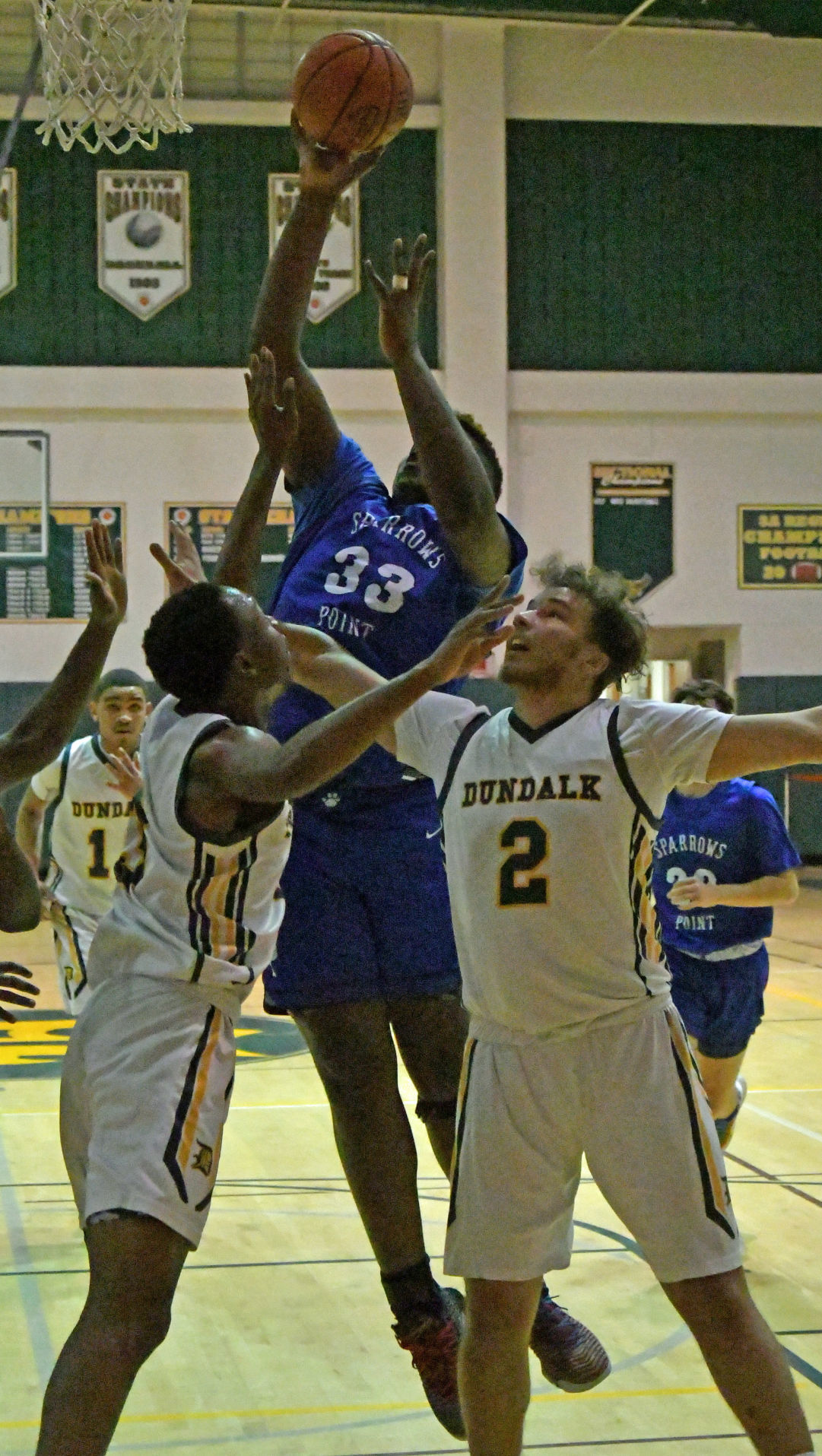 Omat Reid powers to the basket through the defense of Dundalk’s Devon Brown and Kwalin Ray. 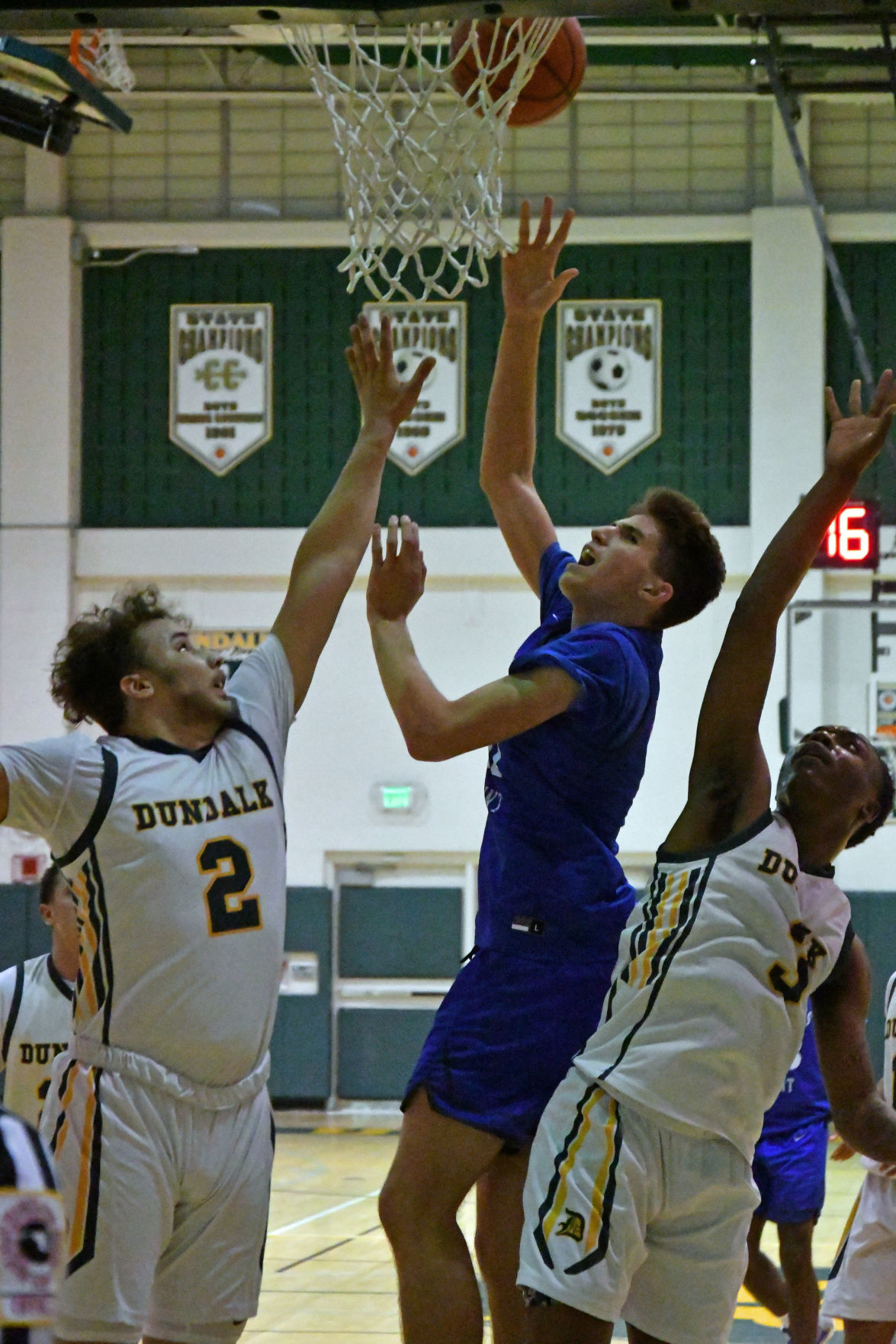 Sean Perry of Dundalk puts up a shot over Sparrows Point’s Christopher Rolfes.

Omat Reid powers to the basket through the defense of Dundalk’s Devon Brown and Kwalin Ray.

The Sparrows Point boys basketball team was nearly ambushed on its way to the Pointers’ first victory over Dundalk in eight years.

The Pointers led the hobbled Owls by 23 points at halftime, then had to fight off a furious Dundalk rally in the second half before holding on for a 62-52 win on Feb. 5 at Dundalk.

The Owls trimmed the lead to just six points, 57-51, with 2:17 remaining in the game, but back-to-back turnovers and missing three of four foul shots ended the Dundalk rally.

Dundalk’s best player and leading scorer, Marcus Nicholson, missed the game due to still being under the concussion protocol.

The Owls were also missing two other starters who had been dismissed from the team the previous week for disciplinary reasons.

So when Sparrows Point took a 42-19 lead into halftime, the expectation was the Pointers would continue to extend that lead in the second half.

What few expected was for Dundalk to open the second half with a 10-0 run and cut Sparrows Point’s lead to 12 entering the fourth quarter, 51-39.

The Pointers scored only 20 points in the second half.

“The guys got too comfortable,” Sparrows Point coach Marcel Marshall said. “They went against everything we wanted them to do in the second half, and that put us in a bad position.

“We wanted them to keep driving the ball to the basket, not settling for jump shots.”

The Pointers made six 3-pointers in the first half. They kept shooting them at the same rate in the second half, but were only successful on one attempt.

That one successful 3-pointer came at a crucial moment for Sparrows Point, a shot by Ramon Villanueva that ended Dundalk’s 10-0 surge.

Dundalk outscored Sparrows Point 12-6 in the first six minutes of the fourth quarter to close to within 57-51, and had the ball with an opportunity to make it a three or four-point game.

Dundalk missed four shots from the floor and three of four from the line in that final minute.

“At the start of the second half, I told the guys we needed to make three stops. We got the stops, played well on defense, but I could tell we were getting gassed.”

“We didn’t start the game focused, and we couldn’t keep up with the ebb and flow of the game,” Major said.

Problem for the Owls was, on some possessions they had three or more shots but didn’t score as they repeatedly missed attempts from under the basket.

The equalizer for Sparrows Point came in forcing 22 Dundalk turnovers.

“We were not boxing out at all,” Marshall said. “All those second-chance opportunities allowed them to get back in the game.”

Villanueva scored 15 points in the second quarter and finished with 29 points. Jermaine Smith scored 10 for the Pointers.

Sean Perry led the Owls with 20 points, scoring 11 in the third quarter. C.J. Trimboll had 13 points.

The Pointers have a chance to earn the top seed in the Class 2A North Region playoffs.

The Owls host Perry Hall on Wednesday and Milford Mill on Friday.

The Patriots were to host Overlea on Wednesday and Dulaney on Friday.