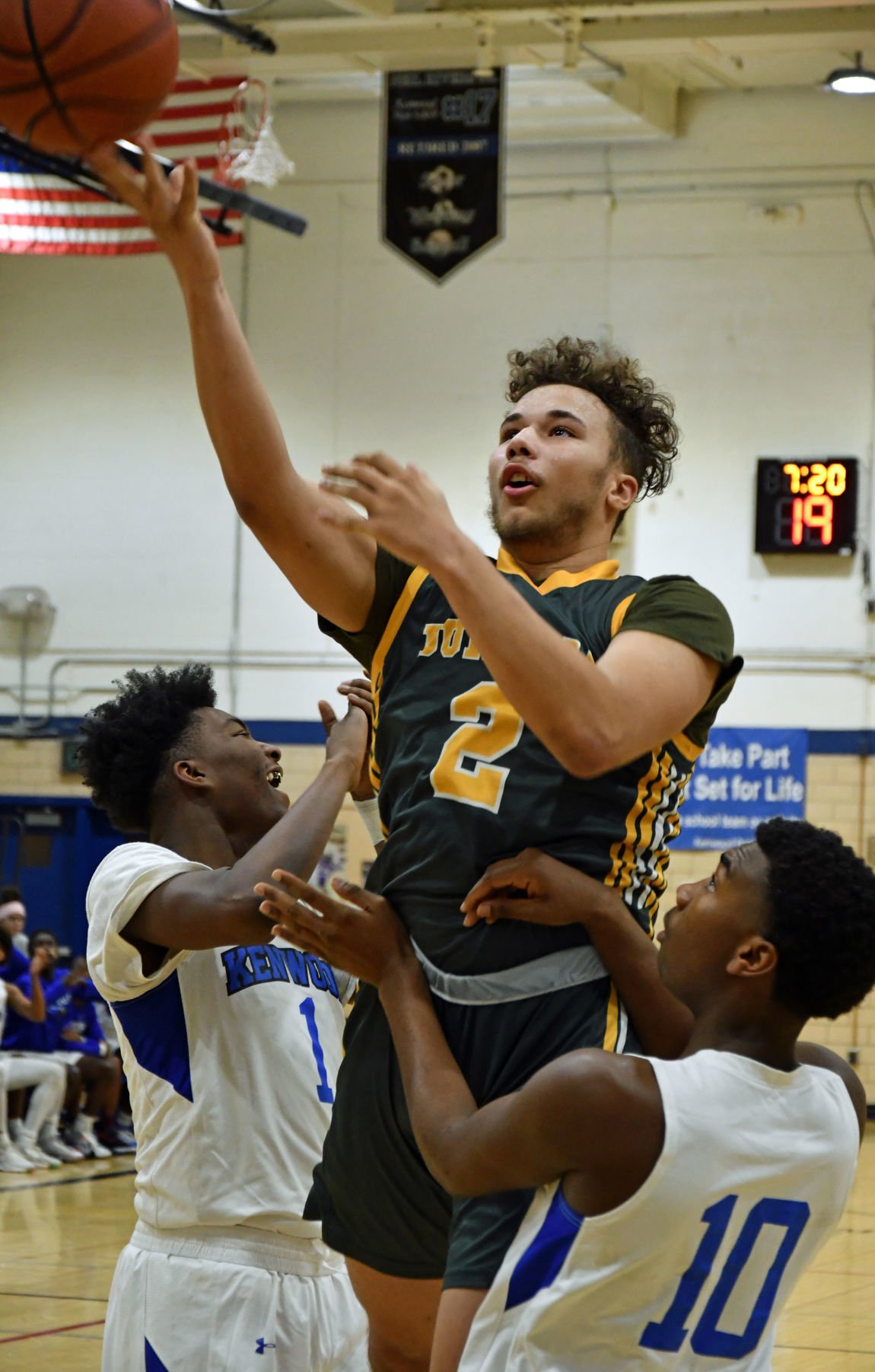 Devon Brown puts up a short jumper against Kenwood. 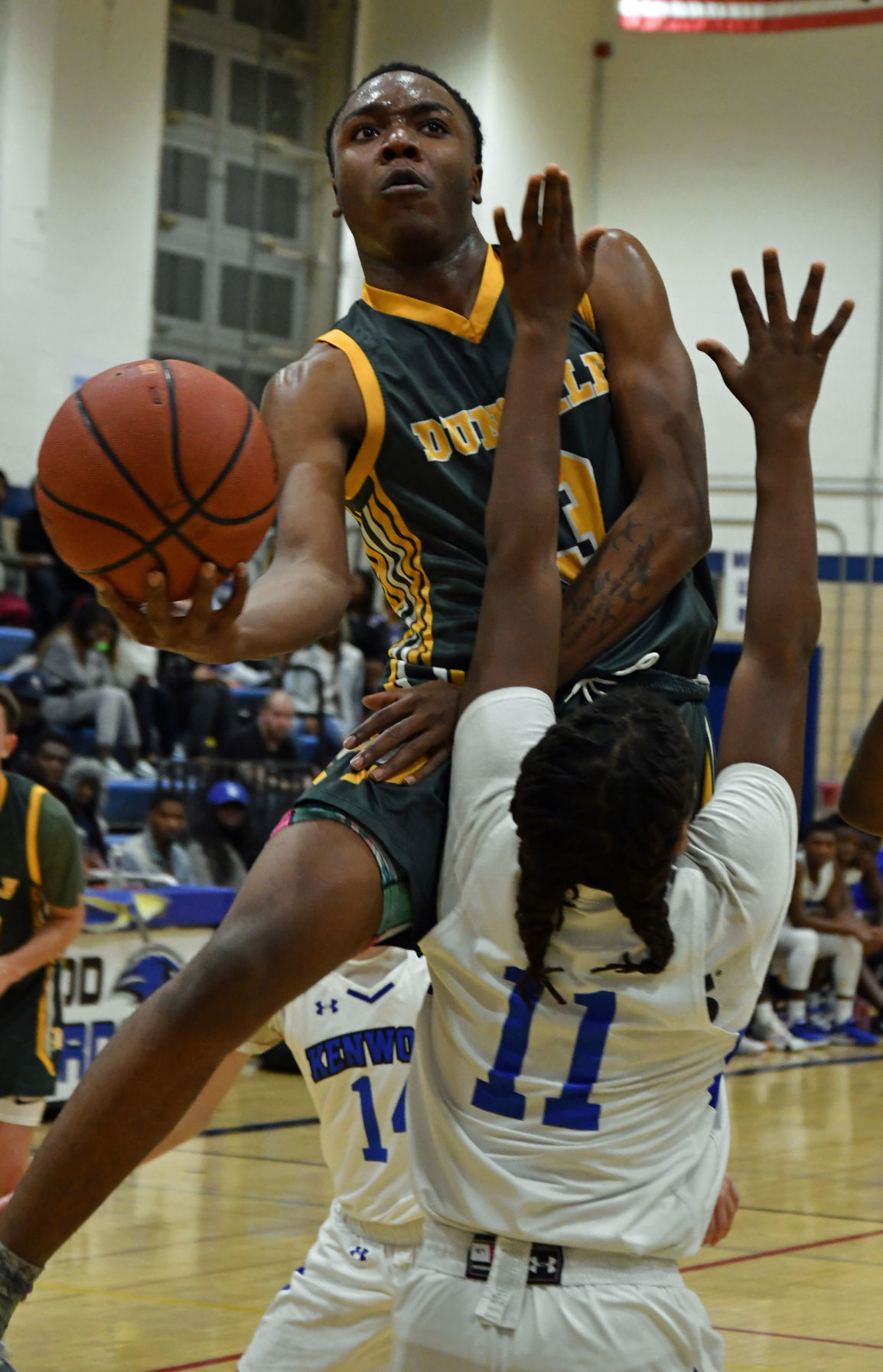 Kwalin Ray drives over Kenwood’s Devin Adams on his way to the basket. 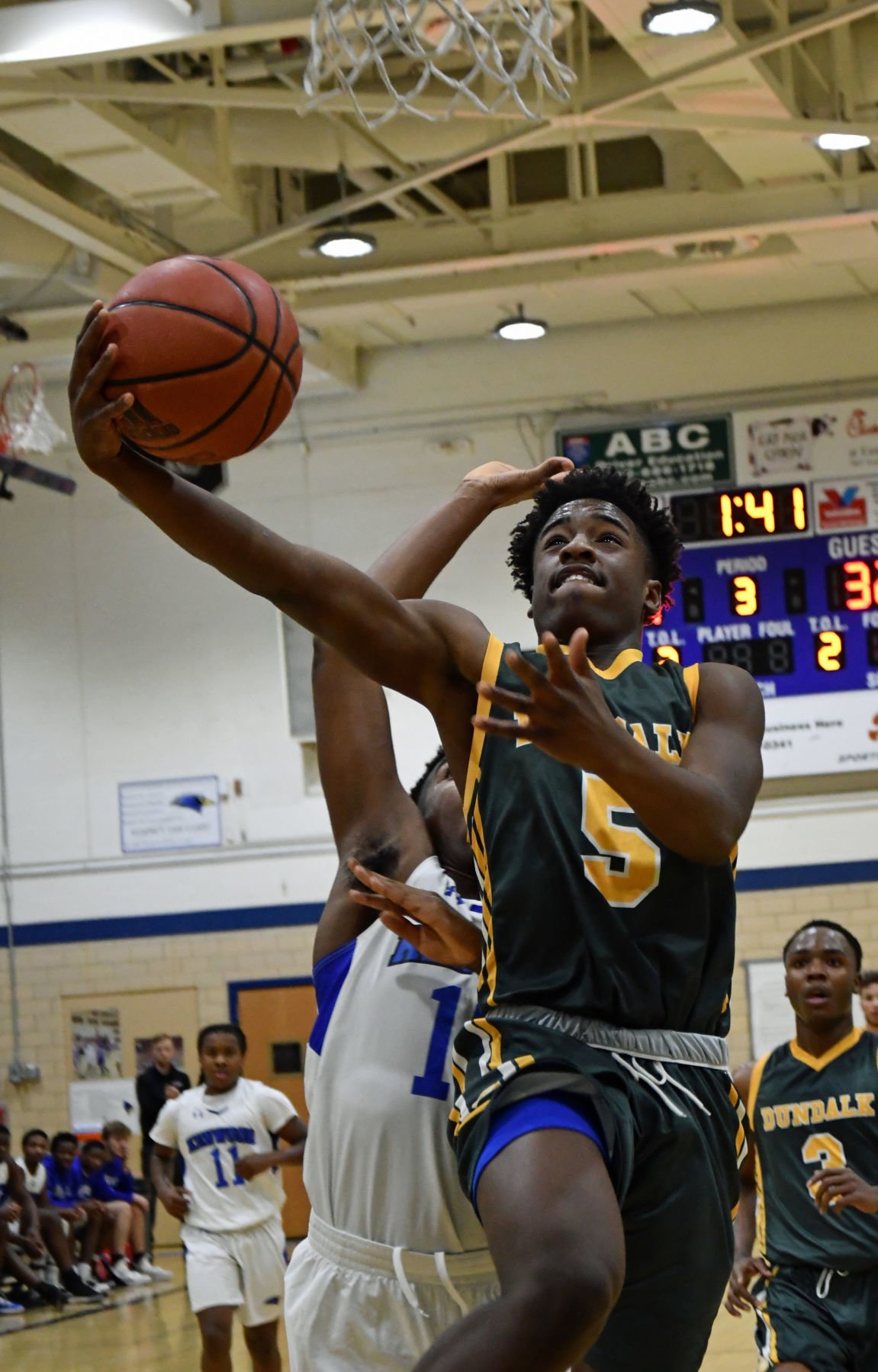 Abdullah Sargeant puts in a layup during the loss to Kenwood.

Marcus Nicholson scored 16 points during Dundalk’s loss at Kenwood on Monday;eleven in the fourth quarter as the Owls rallied from an eight-point deficit and lost by one.

That was what the Dundalk boys basketball team shot from the foul line during Monday’s game at Kenwood. Thirty-three attempts, of which 12 were successful.

Considering Dundalk lost by one point, 52-51, that’s really all that needs to be said.

It wasn’t just the foul shots. The Owls didn’t shoot too well from the floor, either. And they committed a massive number of turnovers against Kenwood’s press.

All things considered, it’s amazing the Owls only lost by one point, and were in a position to win the game with eight seconds remaining.

Marcus Nicholson, shooting two free throws with an opportunity to tie the score, made the first shot and missed the second.

But the ball went out of bounds to Dundalk, and the Owls were inbounding the ball from under Kenwood’s basket.

But before an attempt at the potential game-winning basket could be made, Dundalk suffered one final miscue: the ballhandler stepped on the baseline, giving the ball back to Kenwood.

The Bluebirds were able to run out the clock before Dundalk could commit a foul (and Kenwood was only 9-for-22 on free throws).

Dundalk had started strong, taking a 19-9 lead in the first quarter on the strength of two three-pointers by C.J. Trimbull and one by Abdullah Sargeant.

But then the Owls’ shooting touch just … went away. After soring 19 points in the first eight minutes, it took Dundalk 17 minutes to score another 19 points.

With both teams struggling to score, the game figured to go to the team which could put together the best sustained run.

Leading 21-12 after the two teams exchanged baskets at the start of the second quarter, the Owls went scoreless for nearly four minutes.

Kenwood took advantage with a 9-0 run to pull to within 21-20. A layup by Sargeant followed by a Kyjuan Newland jumper ended the Dundalk slump and briefly halted Kenwood’s momentum.

Briefley. A 10-0 run, during which the Bluebirds made three three-pointers, helped Kenwood go into halftime with a 32-29 lead.

A dunk by Zachary Fox punctuated the Bluebird run. It led to a technical foul against the Kenwood bench, but the Owls made one of the two free throws.

The extra possession did lead to a layup by Trimboll.

Dundalk’s defense held Kenwood to two points in the first six minutes of the third quarter. But the Owls only scored two points themselves over that span, and didn’t have a basket until two seconds remained in the quarter.

Trailing 44-36 early in the fourth quarter, Dundalk finally got the run it needed: an 8-0 surge that tied the score with 4:47 remaining.

A Kenwood three-pointer ended the Owl run, and Dundalk trailed 49-47 after another Nicholson basket. Nicholson again scored with 21 seconds left to play to pull the Owls to within 52-50 and set up the ending.

The Owls started the new decade with a two-point overtime loss at Edgewood, so three of their four losses have been by a combined five points.

Dundalk was to host Patapsco on Wednesday and Hereford on Friday.