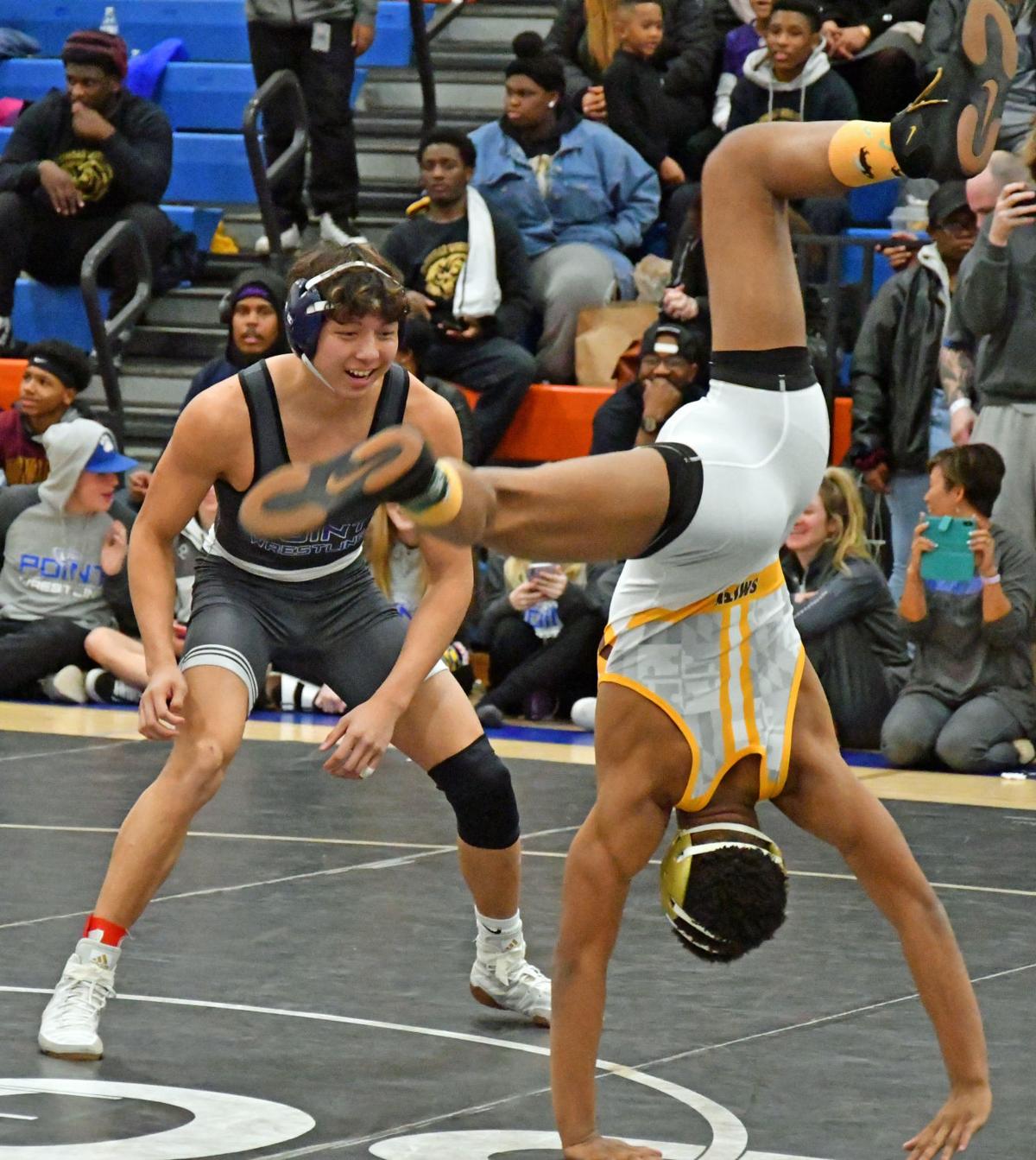 Kendrick Emani watches as Phil Smith of Owings Mills performs a cartwheel during their regional championship match. Emani had opened the match with a cartwheel. 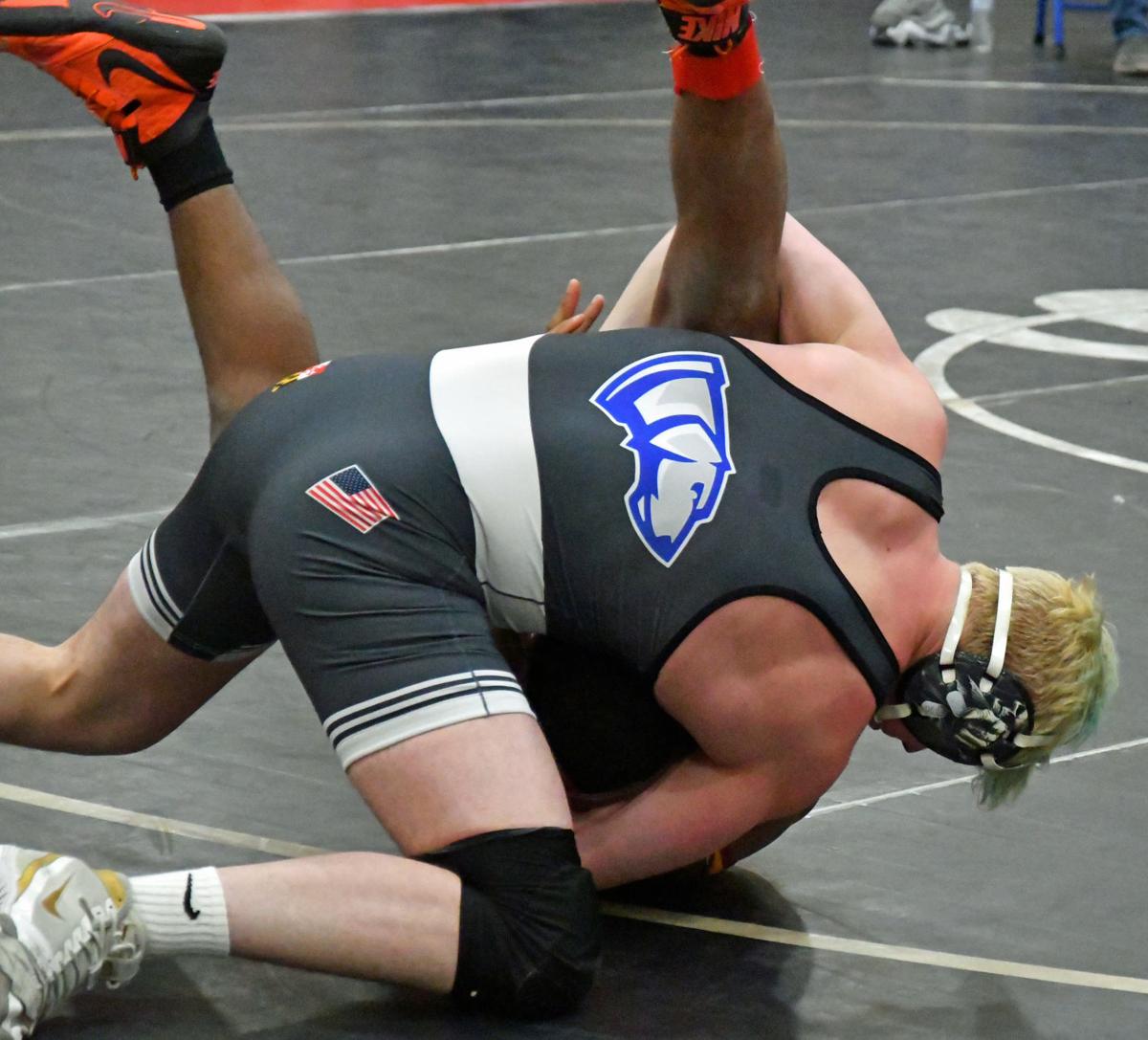 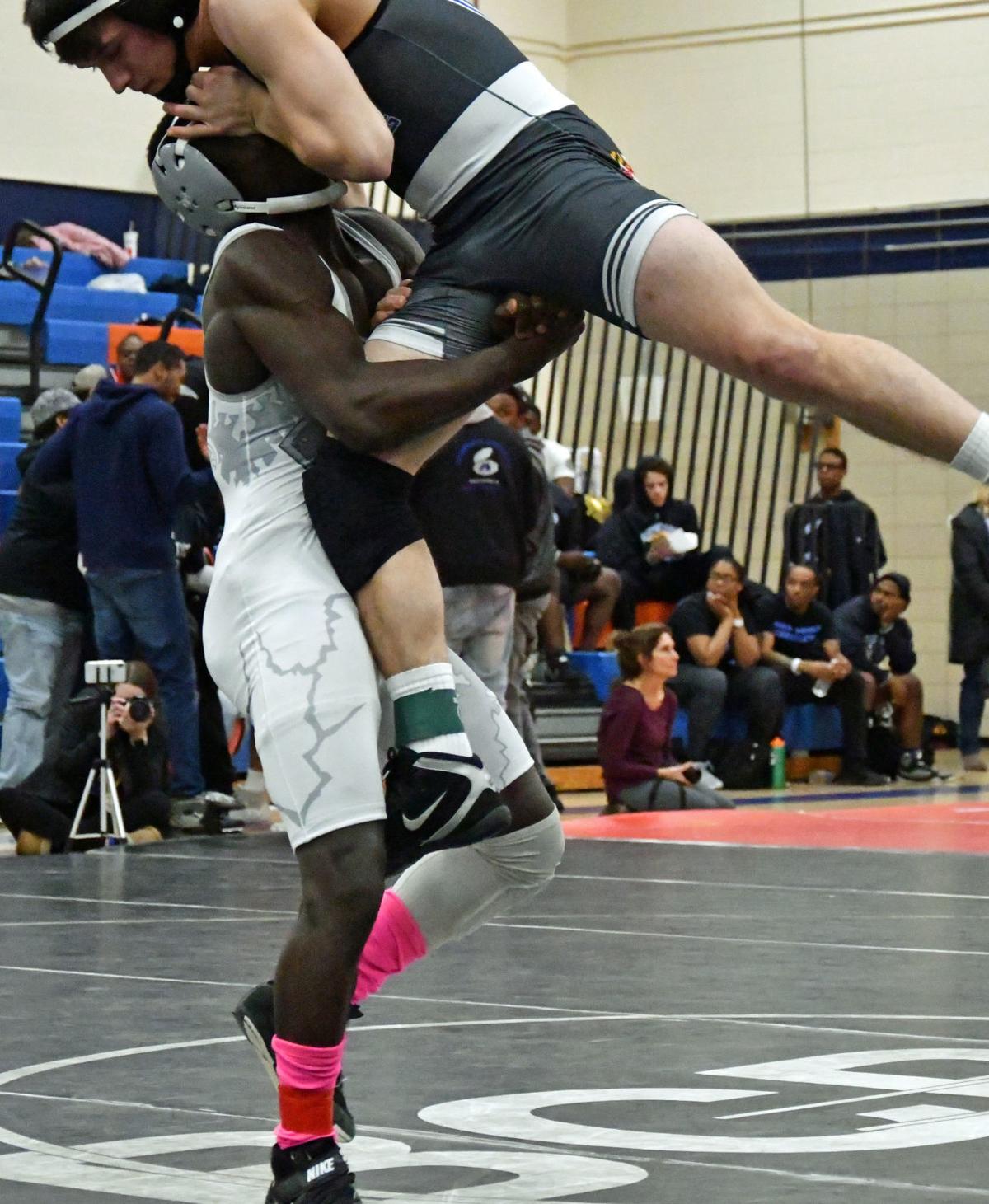 Jerome Vonziah of Overlea gets Luke Hoenig off the mat, but the Pointer wrestler would eventually prevail in overtime. 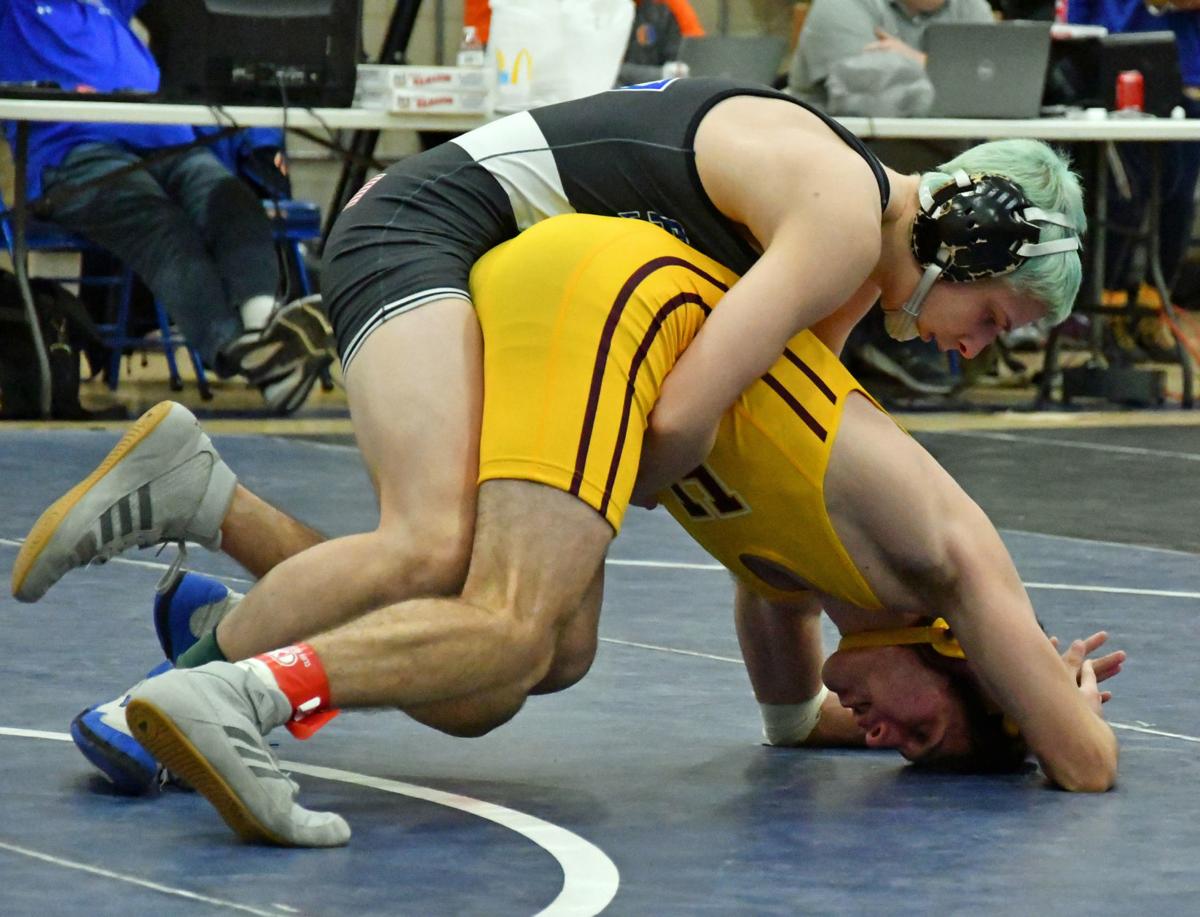 Kendrick Emani watches as Phil Smith of Owings Mills performs a cartwheel during their regional championship match. Emani had opened the match with a cartwheel.

Jerome Vonziah of Overlea gets Luke Hoenig off the mat, but the Pointer wrestler would eventually prevail in overtime.

There are no longer team scores kept at the regional individual tournament championships.

But there was no question as to which was the dominant team during the Class 1A/2A North regional tournament on Saturday at Overlea.

Sparrows Point advanced seven wrestlers to the finals of their respective weight classes, meaning half of the championship matches featured a Pointer wrestler.

If there was any disappointment for Sparrows Point, it was that “only” three of the seven emerged with individual titles.

But all seven, along with a third-place finisher, qualified for the Class 1A/2A state championship tournament this weekend at The Show Place Arena in Upper Marlboro.

Luke Hoenig (138 pounds), Jake Rallo (170) and Lexx Carr (195) each added a regional title to the Baltimore County crowns they had won the week before.

His 7-6 win over Zavion Woodard of New Town also went down to the wire. With the score tied entering the third period, Woodard intentionally allowed Rallo to escape, giving up the go-ahead point buy gambling he could score a two-point takedown.

Woodard got his takedown, but Rallo pulled out the win with a reversal.

Carr (42-2), the top seed, had a relatively easy final. He jumped out to a quick lead with an immediate takedown and near-fall points, then coasted to a 9-0 win over second-seeded Pat Ford of Dunbar.

With two straight byes, Carr didn’t wrestle until a 39-second pin in the semifinals.

Brooks (31-9), the top seed, lost to second-seeded Morgan Vandergrif of Hereford in the final by an 8-7 decision. Brooks had beaten Vandergrif the week before in the county final.

Emani (23-15) upset second-seeded Brandon Ako of Milford Mill in the semifinals by decking the Miller in 2:21.

Overmatched against top-seeded Phil Smith of Owings Mills, Emani and Smith entertained the spectators with cartwheels and back flips before Smith won by a 19-4 technical fall.

In the Class 3A/4A North Regional tournament, Syvil Blake of Patapsco took fourth at 152 pounds to earn a trip to Upper Marlboro.

Blake (25-10) was seeded first but lost in the semifinals when he was pinned by eventual champ Alex Cohen of Sherwood.

In the consolation semis, Blake was pinned by Mark Hopkins of C. Milton Wright.

No Dundalk High (male) wrestler finished in the top four. Nathan McAlister took fifth at 138 pounds,Ryan Riddell finished fifth at 220 pounds and Montez Burnside took fifth at 285 pounds, meaning they are the first alternates if someone drops out.

If not, then all three ended the season on an up note by winning their final match.

Nunez won the 100-pound weight class, while Mason was the champion at 127 pounds.

Nunez (6-13) and Mason (9-14) are both seeded second overall in their respective weight classes in the state girls tournament, also being held at The Show Place Arena.

In their opening matches, Nunez will face Sarah Underwood (3-12) of Northeast (Anne Arundel) and Mason will take on the winner between Brianna Fernandors (5-0) of Fairmont Heights and Lockslea Mayers (23-3).